I updated the code in the script below per suggestion. I receive the same results as described in my original post, here...

I have a very simple Modelbuilder model (ArcGIS Pro, v2.6) that has a parameter for user input asking how many input feature classes to include (in a later model). I want the user to be able to input a number between 1-4 (AuxNum). If the user input value is 1 then a specific model runs, if the user input is 2 then a different model runs, and so on. Prior to the chosen model running, the user needs to be able to input parameter values prior to the model running. I want the python code to open the second model in the Geoprocessing window to allow the user to input parameters.

Here is the layout of the first user input model. 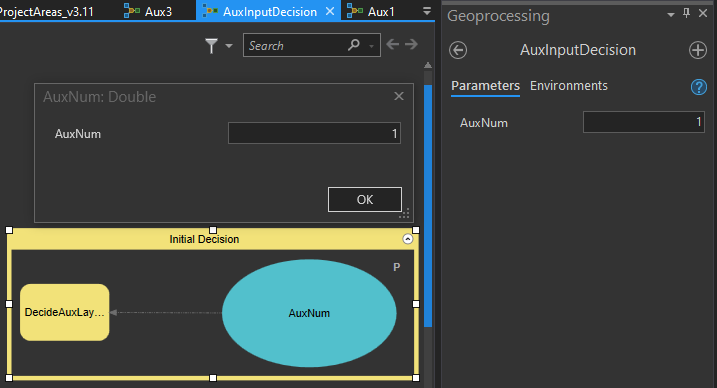 In the DecideAuxLayer tool in the above model layout, I have the following Python code, (spoiler alert!! I'm not a coder).

Issue: when I run the Python script the model does not open in the Geoprocessing window. The model completes with no errors or warnings and shows that the input value is 1. That's it. Here is a screenshot of the results of the script model. 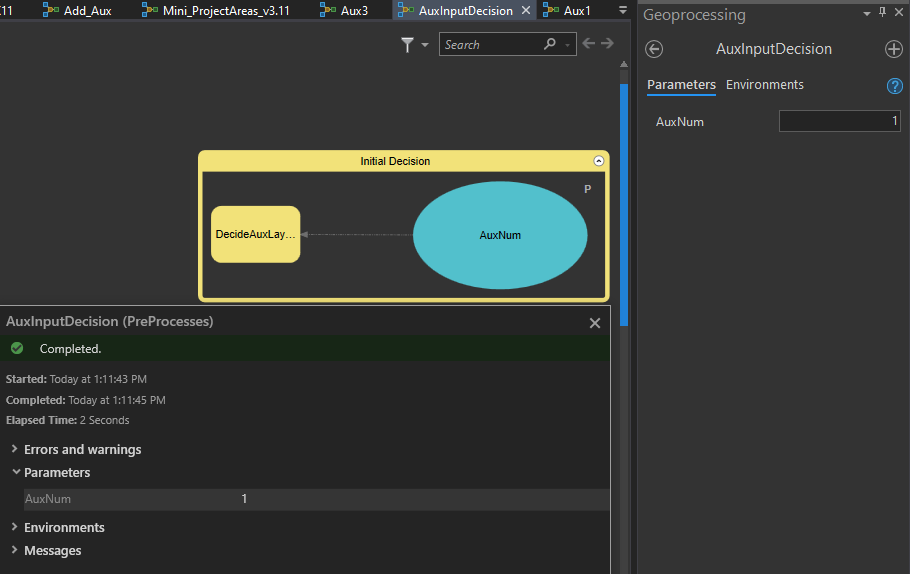 I believe the issue is to do with how you are testing the variable AuxNum. Your code returns the parameter value as a TEXT. You then test the TEXT variable with AuxNum is 1, is your TEXT a number...no! You then test if your TEXT variable is another number...which again is no! and thus nothing happens. You need to adjust your code to this:

Now you are testing if your text variable is equal to the text '1'.

@Hornbydd See error in image below. Made slight spelling change to "...Preprocesses" in the code, I include the code as I entered it for this error message.

Not the answer you're looking for? Browse other questions tagged arcpy modelbuilder arcgis-pro python-script-tool or ask your own question.

2
How to get Network Analyst data from script file back into Model Builder?
2
Returning results from script tool in Geoprocessing Results window?
6
ArcPy script runs longer processing time in scheduled task than in ModelBuilder?
1
Passing File from Python Script to ModelBuilder tool?
2
Printing result of custom model in Python using ModelBuilder and ArcPy?
1
Boolean precondition in ModelBuilder not exporting to Python script