Constructing a raster with Moran's I close to -1

I wrote a script that produces three raster objects and computes their local and global values for Moran's I. The rasters exhibit regular, clustered and randomly distributed data. I would have expected the values for Moran's I to approximate -1, 1, and 0 for the three scenarios. However this is not the case for the regular data. Moran's I comes out at around 0 instead of -1, both locally and globally and I don't understand why.

To form this into a question: What do I have to change about the regular grid so it results in a Moran's I approaching -1?

Here's the script that I used to compute and plot the rasters and statistics (cell neighbourhood definition is queen's case):

By defaults the Moran function uses the 8 neighbours of each cell. For your regular raster, 4 of these are the same and 4 are different to the centre cell. That's no autocorrelation.

If instead you only use the four "rook" adjacent neighbours, you get -1: 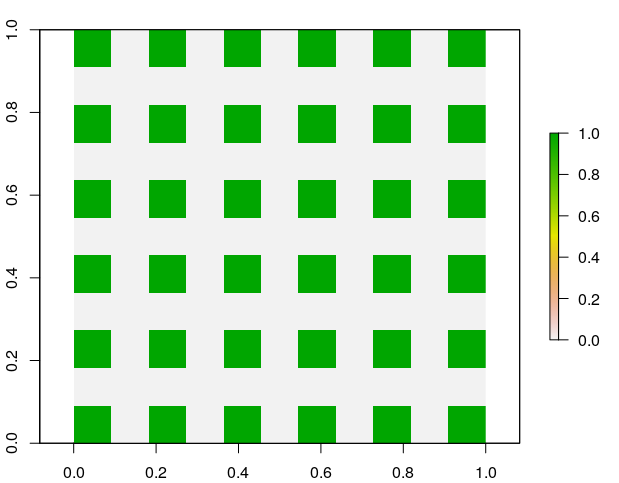 because about 1/3 of its cells (the green ones) have perfect anti-correlation but the rest have varying mixes of self and non-self values.

Challenge: make an 11x11 raster with an even smaller Moran I with Queen's adjacency!

Not the answer you're looking for? Browse other questions tagged raster r autocorrelation moran-index or ask your own question.

1
Converting data.frame with no lat-long info to raster using R?
8
R raster Package Moran's I interpretation
5
R export raster to png without margin
2
Significance test for local Moran's I in R raster
1
Accounting for spatial autocorrelation in rasters
2
Moran's I on 2D arrays/rasters?
1
projectRaster() result does not have the same nrow and ncol, but has same resolution
3
Defining strength of Moran's I