How do I describe a special relationship between connected edges?

Consider this simple situation where three edges connect at a node: 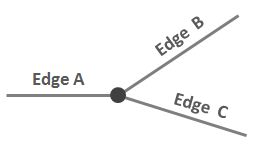 Said in a different way: imagine you’re standing on the node and you’re facing towards A. You start spinning yourself clockwise. The next edge you’ll come to is B, not C.

Is there a way to describe this relationship between A and B in a more succinct, formal, or correct way than I’ve written above?

I suspect there may not be a single term for what I’m trying to say; at a minimum I’d like to be able to describe such a relationship in a simpler way than I’ve done above. This is a platform-independent question. Right now, I’m just looking for the right words. Later I will try to implement the concept in python (pyqgis or arcpy) on a shapefile, so any answers with that end point in mind will be particularly interesting, but not necessary.

I know that I'm a bit late to the party here, but this is quite interesting stuff, and I hope that my answer can be of some use.

What you are asking about is a qualitative relation; the oft ignored sibling of the quantitative relation. Qualitative reasoning comes up quite often in geospatial science. Example queries include: Which parcels are adjacent to this one? What features are inside the overlap of region A and region B? Which regions are concave? Which road is on the left? The relations being: adjacent to, inside of, concave, and left of. Qualitative queries often get overlooked or undervalued when compared to quantitative questions like which is bigger, shorter, or greater in number.

A qualitative relation that takes two inputs is called a binary relation. There are two common notations for this: - isLeftOf(A,B) This is prefix notation. - A isLeftOf B This is infix notation.

In the examples above there was also a unary relation: isConcave. This relation relates a region to itself and would return a boolean value.

All of Egenhofer's spatial predicates in the 9-intersection model (referenced in the 9EIM) are binary relations between two regions. You may also be interested in Randell, Cui and Cohn's RCC (http://en.wikipedia.org/wiki/Region_connection_calculus). The qualitative (topological) relations given in this area of study relate regions to regions, and later works relate lines to regions and lines to lines. However, this is not quite what you are looking for.

OK, sorry for the digression, but hopefully that helps with the terminology aspect of your question.

@whuber was right on track with suggesting the doubly connected edge list (DCEL). This is a close relative of combinatorial maps, often used under the covers in CAD systems, and winged edges. The winged edge (http://en.wikipedia.org/wiki/Winged_edge) concept is how the well-known-text standard defines a hole in a polygon (http://en.wikipedia.org/wiki/Well-known_text#Geometric_objects). Note on the polygon that the order of the outer points is counter-clockwise, and clockwise for the inner points. A little fairy-person walking along the boundary in this order would always see the inside of the region on her left.

Defining ordering around a vertex in a graph embedded on a surface requires two assignments: 1) assigning labels to edge end points and 2) assigning a convention for order around a vertex. If element order in an array (e.g. [A,B,C] in your picture) is clockwise, then we can tell which edge is to the left of B.

In your example, each element is adjacent to the others. That fact is also visible in the array because the array actually represents a permutation, i.e., the order matters, but which element is first doesn't. So [A,B,C] is equivalent to [C,A,B]. In other words, the array wraps around making the last element adjacent to the first.

When you look at topology and connectivity graphs that you get from vendors like Teleatlas, Navteq, ESRI, etc, you will start seeing a pattern (of course everyone has their own "special" way of doing things).

Personally, even though 1) Geospatial Topology and 2) Routing Graphs are just Graphs and can be generalized to be represented in the same data structure, I try to avoid that as much as possible.

I try to make a distinction in my head.

They are just graphs, and they belong to the breadth of science, but there is a clear advantage as not generalizing as the same thing. They serve different purposes, and it is much easier to optimize and apply operations when they are specialized to that particular purpose.

ESRI does this. They have a graph structure for Geospatial Topology (TopologyGraph) and a different Graph structure for Routing Problems(network dataset). Heck, they even have an older Graph Structure - Geometric Networks - that serves well for flow problems in utility networks.

Arguably, in the PostgreSQL/PostGIS world, we also encounter this. There is a data structure for routing and another one for geospatial topology.

In your question, you are talking about graphs and navigating them clockwise and counter-clockwise, as well as faces, which make me thing that you want a specialized structure for (1).

For "Geospatial Topology", I think a nice way of representing this kind of Topology is the way the UK Hydrographic Office does in their S57 Topology Description of Full Topology. 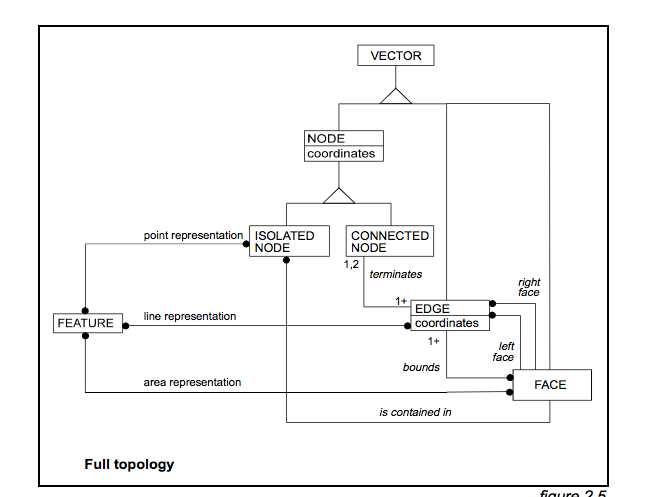 Very similar to what all the main implementations do.

Now, if what you are looking for is routing, then the graph becomes different based on whether you need single direction or bi-directional connectivity. At the end, it boils down to:

Good luck, and let us know how your project turns out.

Not the answer you're looking for? Browse other questions tagged vector topology terminology de-9im or ask your own question.