Last night I had to make an inset map of the area and thought it would look better if I removed the rivers. To do that I copied the shapefile to C:\Users\me\Downloads (working folder is D:\OneDrive\FLGIS\Boundaries) and removed the rivers of the original shapefile in ArcGIS Pro, which meant the edits were irreversible (I couldn't copy the file within the map for some reason).

Now I need the copied, unedited shapefile, so I deleted the original shapefile and moved the copy back to its place. Now I can't add it to any GIS program nor can I replace the data source of the original file. In QGIS it says "invalid data source" and ArcGIS Pro says "layer's data source could not be changed" or "failed to add data."

The last backup was made at the end of July and I have modified it slightly and backed up more recent variations (e.g. as a line shapefile or a polygon shapefile with lakes), so it's not the end of the world. However, I would like to know what exactly corrupted it and how it is corrupted and whether it can be fixed. The linked ZIP includes the shapefile files (coast_1940) as well as the metadata for the original shapefile (coast_feb04).

Your shapefile is missing the .shx file, one of the three mandatory files (shp, dbf and shx).

You can regenerate it using pyshp

Here is a version I fixed with pyshp 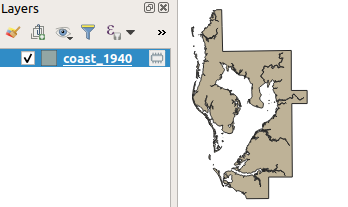 As to why your .shx disappeared, I don't know. You may have forgotten to copy it or perhaps a sync/deletion issue arising from using a cloud storage (OneDrive) for GIS data.

As pointed out in the comments and other answer, the problem with shapefiles is often that people miss some other mandatory files accompanying shapefile. (https://en.wikipedia.org/wiki/Shapefile)

Please note there is simple way to recreate shx since QGIS 3.12 - there is a native algorithm in QGIS to repair or create the *.shx file called 'Repair Shapefile' in processing toolbox. You can use this tool in general to deal with corrupted shapefiles in other ways.

I would also like to encourage you to start using some other modern format like OGC GeoPackage (GPKG) unless you are stacked with shapefile for legacy or other really important reasons.

Not the answer you're looking for? Browse other questions tagged qgis shapefile data-source debugging or ask your own question.