Grouping country polygons into a region without dissolving borders

PowerBI allows for the import of a shapefile via JSON to create a map for data visualization.

In PowerBI, I want my users to be able to select either a single country or a region that contains that country.

As far as I can see, my process in QGIS should be:

If this process is correct (please tell me if there is a better way!), my problem is that using Merge Selected Features deletes the borders between the countries in the region, resulting in a very politically incorrect map! 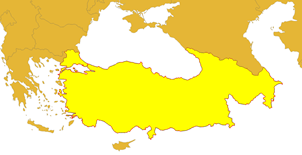 Is there a way to group country polygons into a region without deleting borders?

You may want to take a look at Collect Geometries tool. You can extract selected features as one geometry without loosing the boundaries by means of the tool. You can also group countries belonging to the same region without deleting the borders by specifying Unique ID fields (in your case it means region column).

Not the answer you're looking for? Browse other questions tagged qgis polygon qgis-plugins region or ask your own question.

12
Getting polygons of all countries and ISO-3166-2 subdivisons
1
Dissolving polygons closers than 50m into a single shape QGIS
7
Split polygons into equal areas within each region
2
How Do I Add Custom “Region” labels with GeoJSON polygon style datapoints, similar to country names
0
Counting kilometers/lines with ArcGIS
2
Calculate distances from points to multiple country borders in QGIS
2
GeoPandas .sjoin polygon in polygon - works fast for some countries, but not for others
2
Showing only outer boundaries of polygons / features in QGIS