I have created a grid, which I want to use in an ArcGIS Online application. To create the grid (fishnet) I have used the local projection, which is in meters. I avoided using WGS84 as it is in degrees and is not so accurate. As you can see in the attachment the grid looks ok but as expected the squares are not in the same line. Since I will use this map for reporting purposes, the tilted squares don't look so good.

Do you have any ideas how I could "fix" this in order to look more neat? 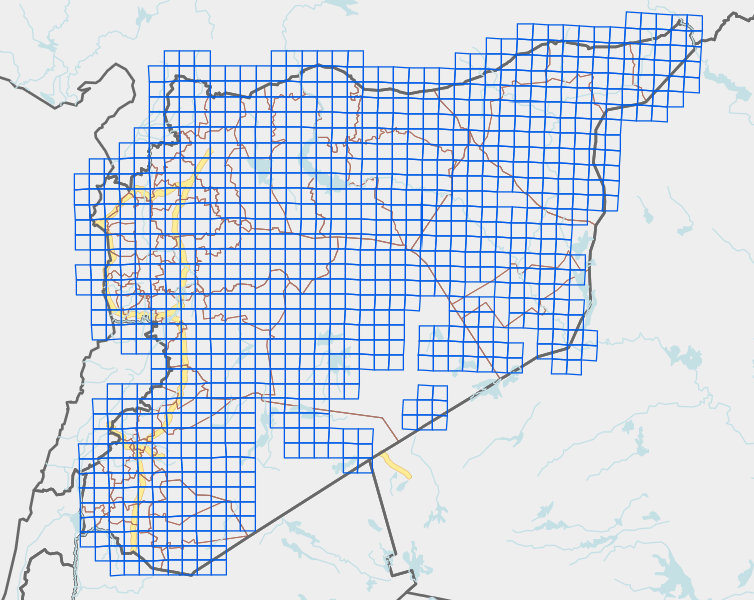 To get a grid or fishnet that has truly horizontal and vertical lines, you have to create in the same coordinate reference system (CRS) that you're going to display it in. In some cases, you can build it in a different CRS and it will still be 'aligned'. That usually requires that both CRS use a cylindrical projection.

In this case, it sounds like you created the fishnet using the area's usual CRS which could be UTM, Stereographic, or Lambert conformal conic. All of these, projected to WGS84 AKA pseudo-Plate Carree or more like Web Mercator will show a 'tilt' to the fishnet.

The 'tilt' seems rather small compared to some that I've seen. The only way to fully remove it would be to build the fishnet in the same CRS that you're going to display the data in.

Not the answer you're looking for? Browse other questions tagged coordinate-system arcgis-online vector-grid or ask your own question.

11
A global, grid-like projection for creating heatmaps
1
Calculate mean elevation over a region
2
How to add a lat/lon grid to a map using azimuthal projection?
0
How to project ASCII grid given in degrees?
0
QGIS heatmap issue
2
Issues with displaying layer with the right extent and units