I am working with a shapefile that I have not been able to project to the Mass State Plane NAD83 meters (i.e., EPSG:26986) SRS using ArcMap's "Project" tool. The "Project" tool reports that "no datum conversion" is available between the SRS of the shapefile and EPSG:26968.

Taking a look at the parameters of the shapefile's SRS using ArcMap, gives the following:

This looks weird. I've never seen an SRS that looks like this one. It seems as though the shapefile has two (different) notions of which datum its SRS is using: NAD_1983_StatePlane_Massachusetts_Mainland_FIPS_2001 (see first bold text, above), and D_GRS_1980 (second bold text, above.)

As-is this shapefile, or at least its geometry, is useless for my purposes. ArcMap cannot correctly overlay it (using on-the-fly projection) with other data I'm using, and thus none of the geoprocessing tools will work correctly with it (e.g., spatial join with another dataset.) When an attempt is made to overlay this data with other data in ArcMap (using its on-the-fly projection mechanism), the shapefile data is way off from "ground truth", usually by around 40 meters.

This suggests some kind of datum mismatch to me, but it appears to be one that ArcMap is not capable of reconciling.

How can I project this shapefile to some well-defined, well-known SRS?

EPSG:26986 would be ideal, but I will settle for any other SRS that allows the data to subsequently be projected to EPSG:26986.

I have tried to get a handle on the origin of this problematical shapefile, but haven't been able to turn up much. It dates back possibly as long as 10 years, and the person/people who created it may or may not be around/available to answer questions. My best understanding is that it is the result of importing some data in EPSG:26986 (specifically, the Massachusetts state Road Inventory) into a transportation demand modeling tool called TransCAD.

Problem solved: Although I've not be able to track down the person who imported this data into TransCAD, I was able to get in touch with the person who exported this data from TransCAD, and walked through the choices available in the TraansCAD export dialog with him. I suggested selecting "No datum transformation" under "choice of datum" (or however exactly the combo box in question was labeled.) The resulting shapefile lines up perfectly with the other datasets we're working with in this project.

Thanks to everyone who chimed in with suggestions and/or advice.

Here's my suggestion (without knowing exactly where [pun intended] you got the shapefile from.)

Outside of ArcGIS Desktop

Inside of ArcGIS Desktop 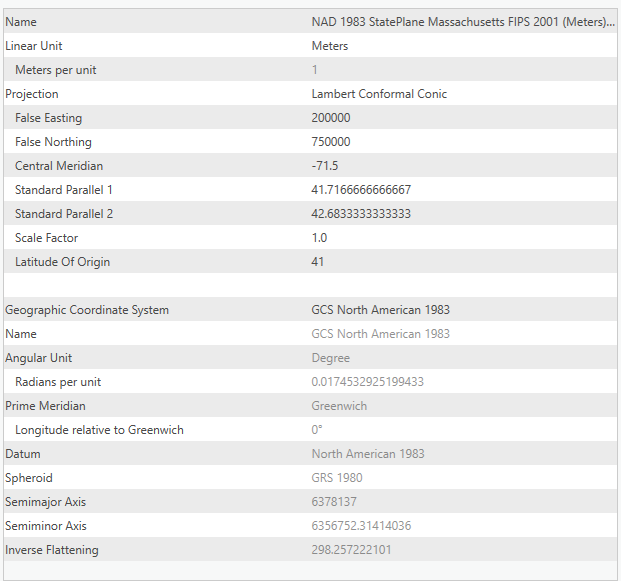 Not the answer you're looking for? Browse other questions tagged arcgis-desktop coordinate-system arcmap datum or ask your own question.