How to place markers on the outline of a circle in google maps?

I have the center of a circle and it's radius and I need to place variable amount of markers on the outline/stroke of the circle. The distance between this markers should kept same, so if I have 8 markers to put on the orbit, each of them has 45 degree space (360 / 8) and also it should not be hard-coded as the number of markers is variable.

I wanted to know what is the right way for calculating the Geo-coordinates of each marker?

here you can see an example, the outer marker should move on, however I can't calculate the proper LatLng values. 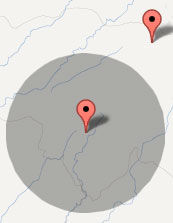 I finally came up with this formula:

If you look at snapshots you can see that markers at 0 and 180 degree has placed quite fine, but it seems there is something wrong with other markers. It's gonna works fine for me, because I don't need such a perfect accuracy, however I'm wondering what's cause the problem? 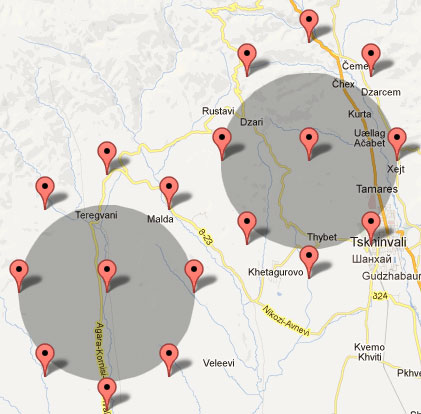 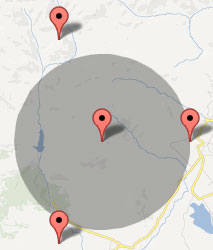 I think this is all down to the projection you're using. Looks like your code is correct, but basically you can't assume that by travelling one unit longitudinally on a map will look the same as the same distance latitudinally.

This has a nice explanation of the differences in projections (see the bit under Tissot's indicatrix):

Not the answer you're looking for? Browse other questions tagged google-maps mathematics or ask your own question.

57
Why is the 'straight line' path across continent so curved?
0
Whats the unit of circle's radius in Google Maps