Unable to join double type data into a label expression

I'm struggling to include the field data from a double type attribute in a label.

I've managed fine to pull in the data from the "Code" and "Features & Remarks" columns... I also wanted to encase the "Code" field in parentheses followed by a space, so used the following;

Which also works fine when the latter column is empty. Both columns are QStrings.

Now I'm also trying to pull data in from another column "Depth of Burial" which is a double type. As a note, either "Depth of Burial" or "Features & Remarks" is always NULL - they never both have data in a given row, but often both are NULL. 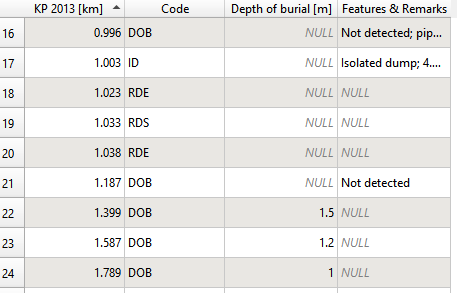 I have also tried concatenate and if statements. The only way I could display the "Depth of Burial" column data was to either call it on its own or in the following;

However this one did not show any labels other than the "Depth of Burial" values.

My ideal aim to generate labels that are all prefixed with the "Code" column in parentheses then contain either the "Depth of Burial" value or the "Features and Remarks" column depending on which has data for a given row.

A+B is a concatenated text, AB

But what should happen when A+1 is computed? Should it be a concatenated text, or an invalid operation? QGIS will first try to convert the string to a number, then to do the addition, which fails as A is not a number. It would however succeed with '1'+2 = 3.

To overcome this behavior, you can either use the concatenation operator || instead of +, or you can convert the number to text.

Not the answer you're looking for? Browse other questions tagged qgis labeling expression double or ask your own question.

2
Handling QGIS Data Defined Label Position on PostGIS Layer Null Defaulting to 0?
8
Label placement on rotated map in QGIS
1
Single label for multiple features with different values in ArcGIS Desktop?
2
ArcGIS 10 3 Label features with numeric field which has null values and another text field, showing both fields even when there's null values
14
Iterating over conflicting labels
0
How do I edit an individual label in QGIS that has data from two columns on two lines, but also needs a word wrap?
0
Issues with ArcGIS Pro and Python for Labeling Point Shapefiles
0
Multiple labels from same variable using QGIS
0
Labels disappear when moved!
0
QGIS: Export labels from layer to shapefile / Geojson