I have a series of many GeoPandas Polygon objects, each with an associated exposure time. My goal is to find the union of all the Polygons in order to create an exposure time map.

For each Polygon in the final exposure map, I want to have the total exposure time, which is defined as the sum of the exposure times of each overlapping Polygon.

I think I have it working for the case of 2 geodataframes:

How do I do the same for the case of N geodataframes, where N might be tens or hundreds?

I tried using an rtree index and unary_union(), but couldn't quite get it to work, plus that only seemed to work on the Polygons themselves rather than the geodataframes, meaning that the exposure time information was lost. I am a complete novice with GeoPandas, so maybe I'm missing something obvious, but after a lot of searching and reading documentation yesterday, I'm stumped.

Here's an image of a case closer to what I eventually want to have. My goal is to have a total exposure time associated with each polygon. In this image, I'm showing the union of three geodataframes, where each geodataframe contains 4 non-overlapping squares. The squares' locations relative to one another are fixed across all geodataframes, but all 4 squares can shift as a unit, from geodataframe to geodataframe. 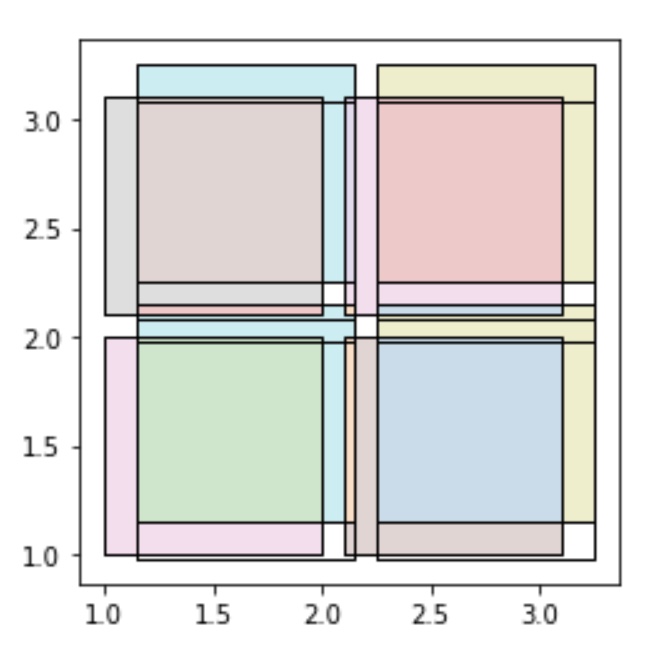 Browse other questions tagged python geopandas union geodataframe or ask your own question.

5
Speed up row-wise point in polygon with Geopandas
3
Fast Union with Known Geographic Locations
8
Shapely polygon union results in strange artifacts of tiny, non-overlapping areas
2
Testing intersection between shapely object and geopandas GeoSeries?
1
GeoPandas: Get distance from geom in tableA to a geom in tableB that matches attribute from tableA
2
GeoPandas .sjoin polygon in polygon - works fast for some countries, but not for others
3
GeoPandas intersects doesn't find any intersection
3
Converting Individual Points Instead of Entire Geometries Causes Different Transformation Results in GeoPandas and PyProj