I am currently working on a routing solution with PgRouting (Dijkstra's algorithm), but the shortest path it creates always start from the nearest nodes generated from the edge table, and sometimes the distance between the node and the point is too long(4km or more) and it makes my calculations wrong. Is there a way to calculate the shortest path from the closest line vertex to my starting point? I included a picture to clarify more my problem 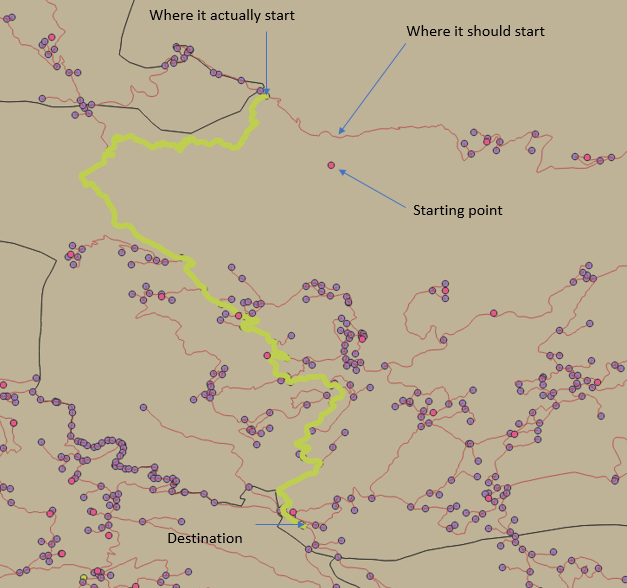 While still not in the official release, the withPoints family of functions is in a stable state since pgRouting 2.2 (?) and provides a dynamic interface for temporary nodes in a graph, i.e. routing between arbitrary points.

The key here is the points_sql where you specify the closest edge to any of your temporary nodes, and the fraction of line length their closest point is located at.

With the details parameter set to TRUE, the function treats all dynamic nodes from the points_sql (i.e. all other than those used as source & target) as 'normal' nodes of the graph in the result set; setting to FALSE would return only edges and vertices of the edge_sql (but always including start and/or end node if they are of the points_sql).

[*] for all temporary nodes passed in via points_sql, the function will use negative pid values as input as well as in the result set!

Not the answer you're looking for? Browse other questions tagged postgis postgresql pgrouting nodes dijkstra or ask your own question.

4
Calculate all points in network that are x distance from a starting point in PostGIS with pgrouting
2
PgRouting : pgr_withpoints issue
2
Dynamically determine origin and destination points on network lines from nearby features using Pg Routing (pgr_dijkstra)
1
How to identify pgrouting nodes I am interested after splitting road network in for many to many routing?
0
Locations not picked up by pgrouting

2
Pgrouting - Networking
0
How to achieve point to point routing?
0
Shortest path problem from A to B on routing engines
6
multi-multi point pgrouting functions
0
Route starting from closest node along edge
0
Problem with Nearest vertex and Shortest Path function in Leaflet