How do coordinate systems in QGIS work? [duplicate]

So, I don't really have much knowledge about the coordinate system and sometimes I get stuck in certain things that I just can't get around it. For example, whenever I'm working with a vector that is in UTM and I need to see a raster of that place, I use the plugin to see the google satellite in the background.

But how can it be perfectly placed with the vector? Wasn't it supposed to have like a difference between the two since the vector is in UTM and Google works in another coordinate system? How does that work? I am doing something wrong?

Could someone explain that to me or give me some references that I could be reading to fully understand the subject?

A layman way of explaining what QGIS is doing.

Imagine you have a photo of your house. Lets say its an aerial photo that you got from Google Maps (except a bit better quality and resolution. Now lets also say that you have house plans of your house. On an A4 piece of paper.

Your house plans won't be at the same scale or possibly even same orientation as your photo. The two could be described as being in different 'map projects' (or coordinate systems for simplicity sake).

The process of aligning them would be to rotate, resize and move around the pieces of paper around, such that they line up and that the house plans would fit at the same scale, orientation etc, as the aerial photo, eventually 'lining up'.

What QGIS does, is the above, but it does it automatically, as long as it knows the source coordinate systems.

The process of doing this is called reprojection. and there is some funky maths behind it, and if you really want to learn this, the topic of geodesy would be your starting point (and your first lesson is that the earth is not round. LOL.... its a potato!).

Hope the above helps.

How QGIS coordinates work depends on how you use it.

QGIS has a project Coordinate Reference System (set under Project/Properties/Set CRS) that it uses to represent each layer that it displays in its window. Each layer, whether vector, or raster could have a different CRS, and QGIS will reproject the data to match the main CRS.

Below is an example of QGIS reprojecting Google's Hybrid raster layer onto this project's Oblique Mercator (it's central axis is tilted at -55 degrees through Virginia, USA*) and it distorts the raster. 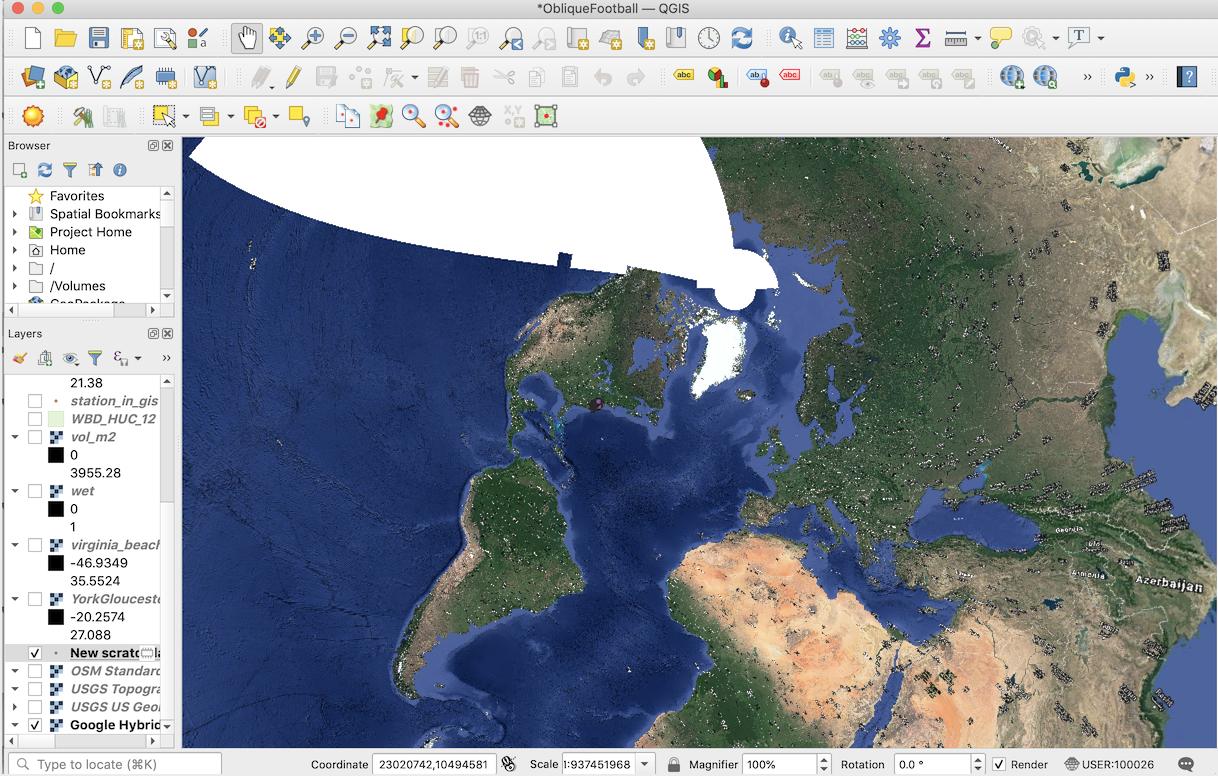