I have the following WFS link:

I want to read and store the data contained in this link using PyQGIS so that it could be automated. Initially to test it

This confirmed that the WFS link does expose some data

After this I decided to use PyQGIS to run a script to add this WFS layer programmatically. Here is what I tried:

Several attempts at trying to add the above WFS layer resulted in the compiler indicating that the layer was invalid (which begs the question of how QGIS was able to load it in the first place). I even tried using the Processing->Graphical Modeler tool in QGIS hoping to generate the PyQGIS script using a model.

In order to do that, under Algorithms, I chose Modeler Tools->Load layer into project, put in the WFS layer URL and clicked ok. But running the model failed as seen below 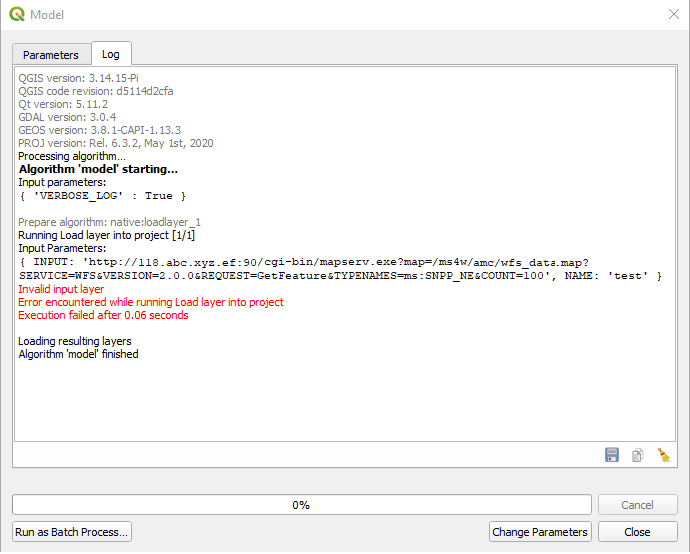 I even tried to access the GetCapabilities xml/gml document directly from the browser with the following results:

For the above links I referred to the MapServer WFS documentation. What I wish to do is to somehow obtain the data exposed by the WFS service and store it in some form maybe a GeoJSON or even in PostgreSQL. But all my efforts have thus far been fruitless.

You have to speficy more than just the url in the layer source. This is an example of what could work for you. You should at least specify the typename, url and version:

Also, if adding it manually in the interface worked for you then you can check the source in the layer information and just initialize the layer in PyQGIS with the same source.

Not the answer you're looking for? Browse other questions tagged qgis pyqgis wfs or ask your own question.

1
MapServer WFS OpenLayers 4 not visible
1
QGIS Add Vector Layer 'layer not valid'
0
GeoServer & QGIS - Using GeoJSON in a WFS request
2
Requesting only features within bbox from WFS
1
Why am I getting “Project file error”? XAMPP and QGIS Server
1
Vector layer from MapServer WFS not displaying in OpenLayers 6
0
New GeoServer WFS error NoSuchAuthorityCodeException
1
QGIS not loads a layer from Geoserver WFS