Generate global grid of circles with minimum overlap with PostGIS

I want to generate a table of geometry points in PostGIS which represent the centers of circles, each with the same radius of X meters, that together form a "grid" that covers the entire earth's surface (ie every point on the earth is covered by at least one circle), and with minimal circle overlap.

On a plane, I imagine this pattern is pretty efficient in terms of minimal overlap. If there is a better pattern, please suggest.

I imagined an approach like this, first generating squares and using those to create circles, but such a grid ends up with much more circle overlap. 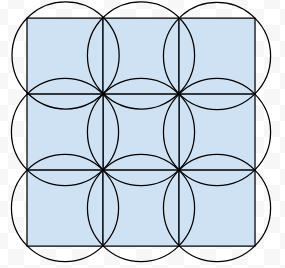 However, then I found that the circle centres can be described by the vertices of a grid of equilateral triangles. 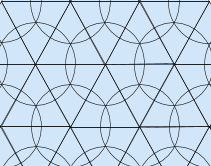 I thought that because of that, a geodesic Discrete Global Grid System (DGGS) which used Class I triangle subdivisions would achieve the desired circle overlap pattern.

However, I ran into this problem: due to the way regular shapes become distorted when projected onto a sphere, the DGGS made by this method is completely irregular.

First level Class I subdivisions with this method have >10% differences in the lengths of triangle sides... no longer remotely equilateral, creating a pattern where the same radius circles can not guarantee complete coverage and minimum overlap.

Here's an example of 136km circles at level 5 subdivisions over part of Australia. They're nice and regular where I start recording, but move to the right and there are large gaps.

So my question is how can I create such a DGGS that is regular? By "regular", a maximum 1% variance in distances between circles would be acceptable, but >10% in my mind is too much to achieve the aims of coverage completeness and minimal circle overlap.

Browse other questions tagged postgis vector-grid geodesic dggs or ask your own question.

68
Creating regular polygon grid in PostGIS
7
Why are my icosahedron triangle subdivisions not equilateral (PostGIS)?

68
Creating regular polygon grid in PostGIS
6
How to create a valid global polygon grid in PostGIS?
6
Converting polygon values to a vector grid using PostGIS
3
Generate a Grid / Points around a single point in QGIS
2
Circles from QGIS into PostGIS
3
Connecting circles with lines cover all circles using PostGIS?
1
How to generate grid shapefile with grid squares that align with landmasses in R
1
Find all circles that overlap with point