The extent and density of features is fairly large so I'm running into memory limitations consistent with Getting topology or out of memory errors with large dataset intersects and spatial joins in ArcMap.

I was able to avoid the memory error by reducing the buffer size but may need to find an actual solution.

The self-intersection is pretty evident in the screen grab below. That's a selection of all the intersection output features for a single buffer. While my goal is to have a few peices where it intersects the census geoms, it clearly is being cut up by the other buffers from the same layer.

Has anyone found a way to avoid the self-intersection?

Obviously I could dissolve after calculating the intersection but that doesn't improve the efficiency of the calculation.

As a note, the dice tool isn't helpful I don't think because the problem is the number of features not the complexity. 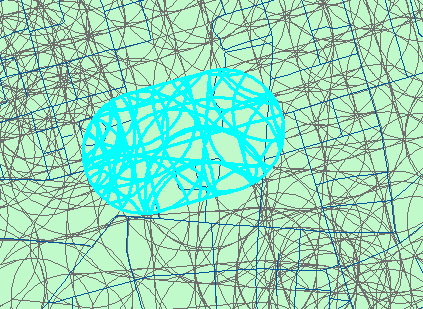 You have sort of shot yourself in the foot by buffering all your roads and storing the buffers in a single FeatureClass. You either accept the issue and do the dissolve after processing as you have suggested or filter before you run the intersection.

A simple model iterating over buffers and feeding them one at a time into the intersection tool will generate the data you require. This may be even slower but it wont be generating all those self-intersections.

You could look at parallelizing the problem by using the multiprocessing module in Python, if you take a scripting approach.

A census block I assume will intersect multiple buffers, and double count them.

Not the answer you're looking for? Browse other questions tagged arcpy intersect or ask your own question.

7
Getting topology or out of memory errors with large dataset intersects and spatial joins in ArcMap
1
Zonal statistics 2 ends up causing a fatal error. Is there an alternative?