How do I interpret the results from the distance matrix?

In this dataset I have created the green dots represent coyote sightings while the yellow dots represent rabbit sightings. I am trying to determine if coyotes and rabbits are randomly distributed or if there is a relationship between coyote habitat and the proximity of rabbit habitat.

I created a distance matrix between the two sets of data points, but I'm unclear on how to interpret the results. Is there a coefficient that can be used to judge whether or not the distribution appears to be random? 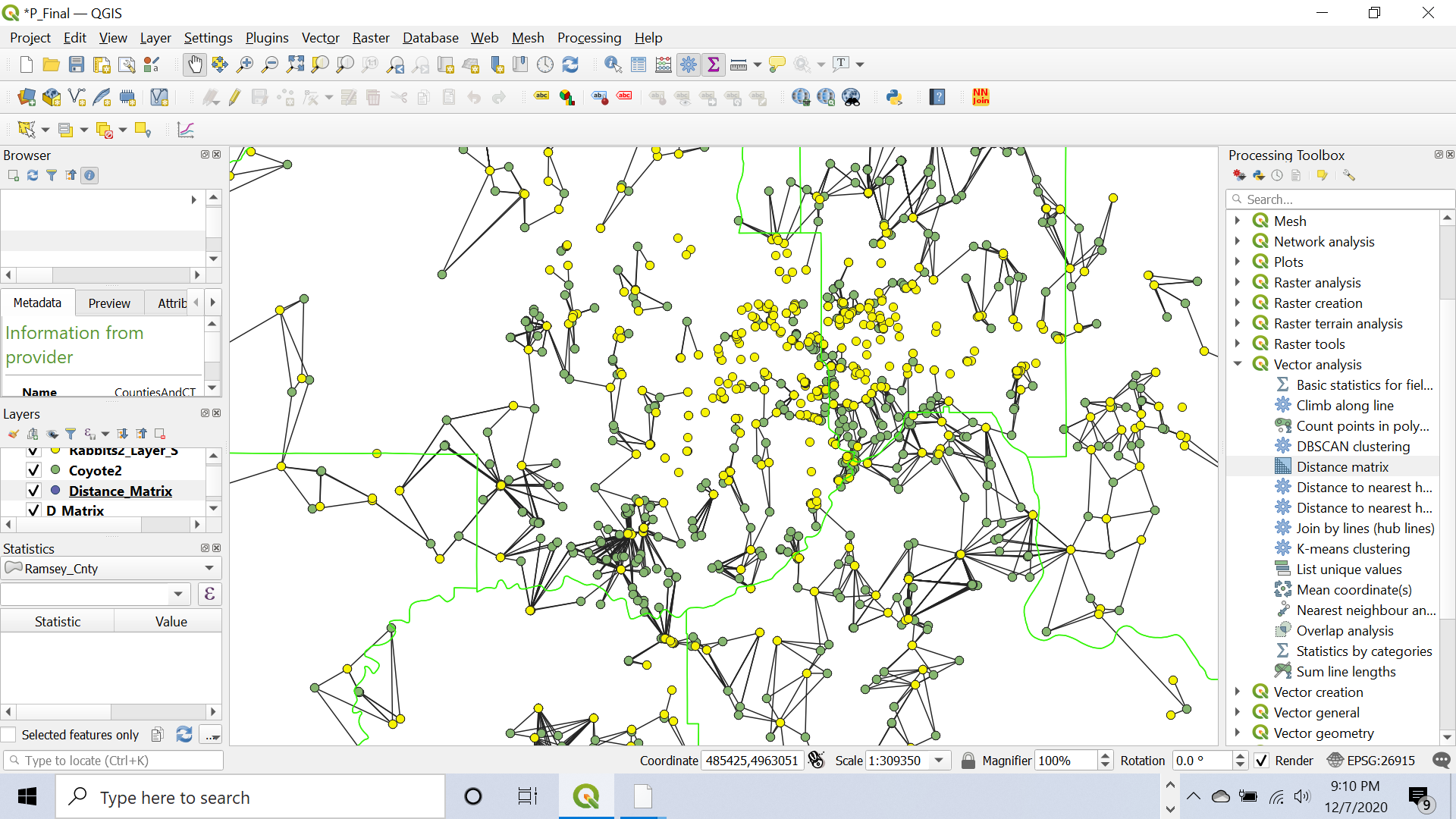 You can use a heatmap renderer for your point layers (in the symbology, change from Single Symbol to Heatmap) to see how/if the patterns overlap. That's probably the easiest and fastest way to get a first impression about spatial distribution. 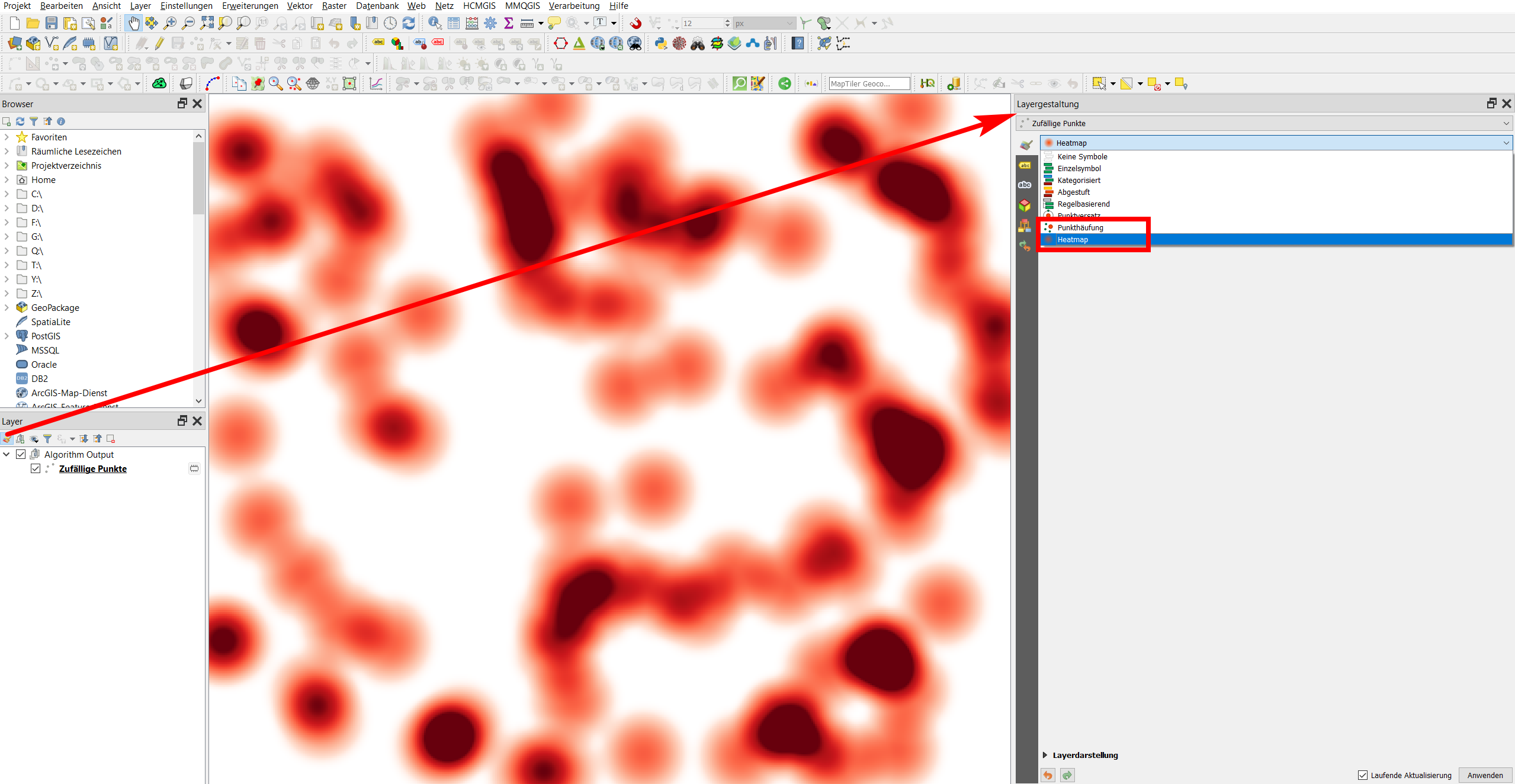 You could also create a Heatmap as raster layer with Menu Processing / Toolbox / Heatmap (Kernel density estimation). You could than even extract contour lines (see screenshot to see how to do that - even though my menus are in german, it should become clear where to find it): 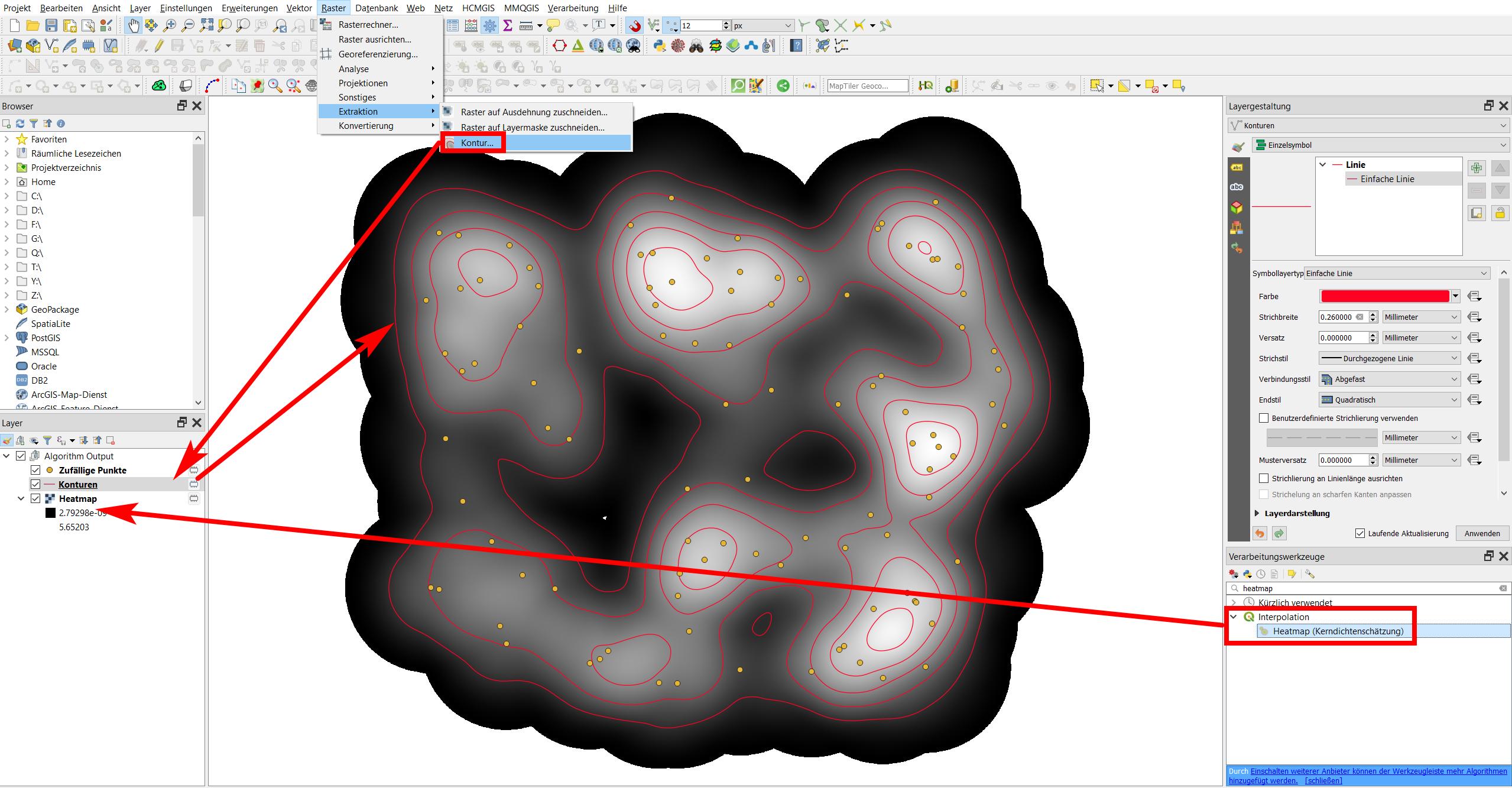 You can do this twice, for each of your points (rabbits and coyotes) - than you have two rasters and two contour line layer:

You can than compare the two contour layers: 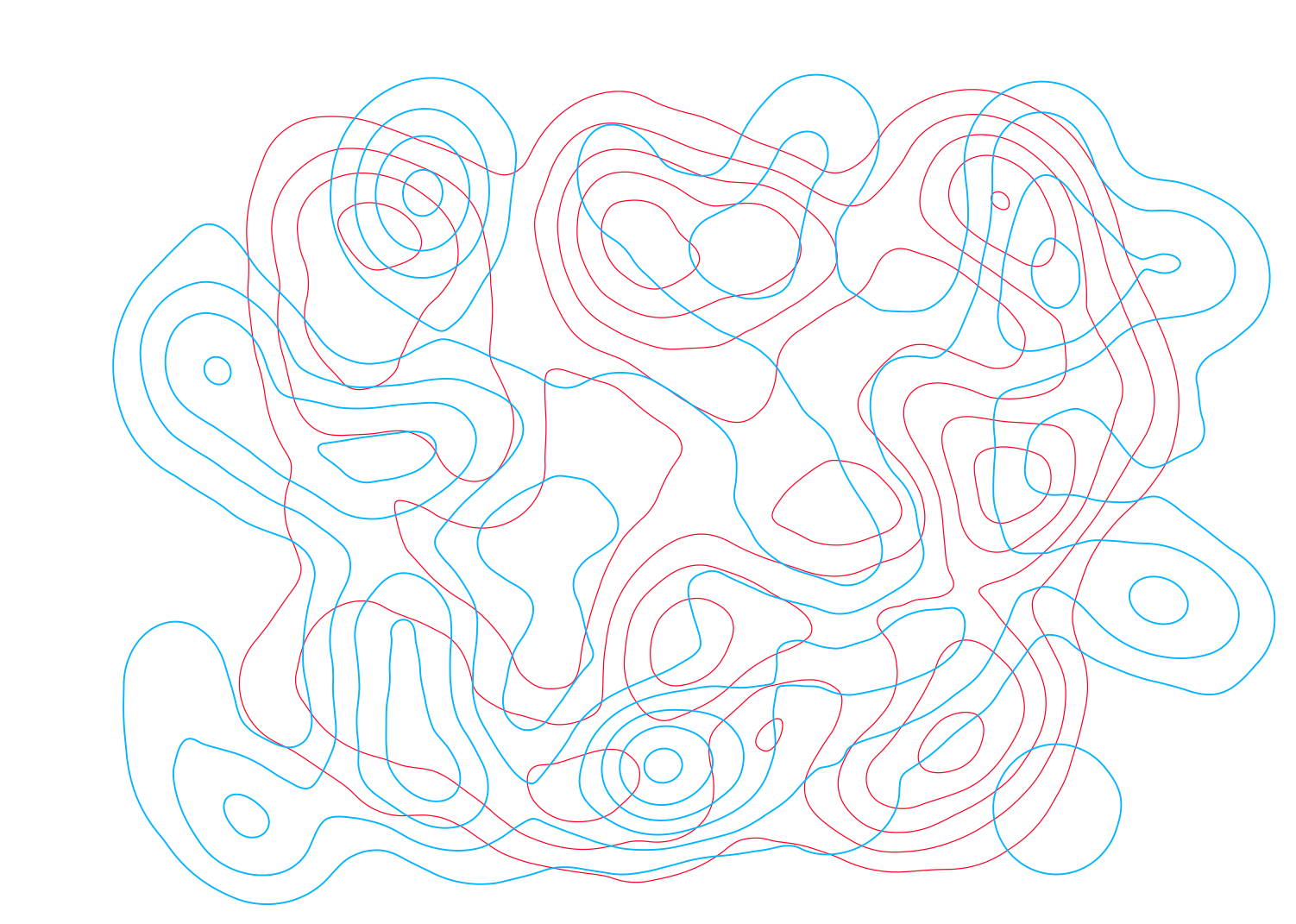 Instead of contour lines, you can also create contour polygons: Menu processing / Toolbox / Contour Polygons and set a graduated color to the polygons:

Or you can use the raster calculator to add the coyote-raster to the rabbit-raster to get areas where both of them are often found: 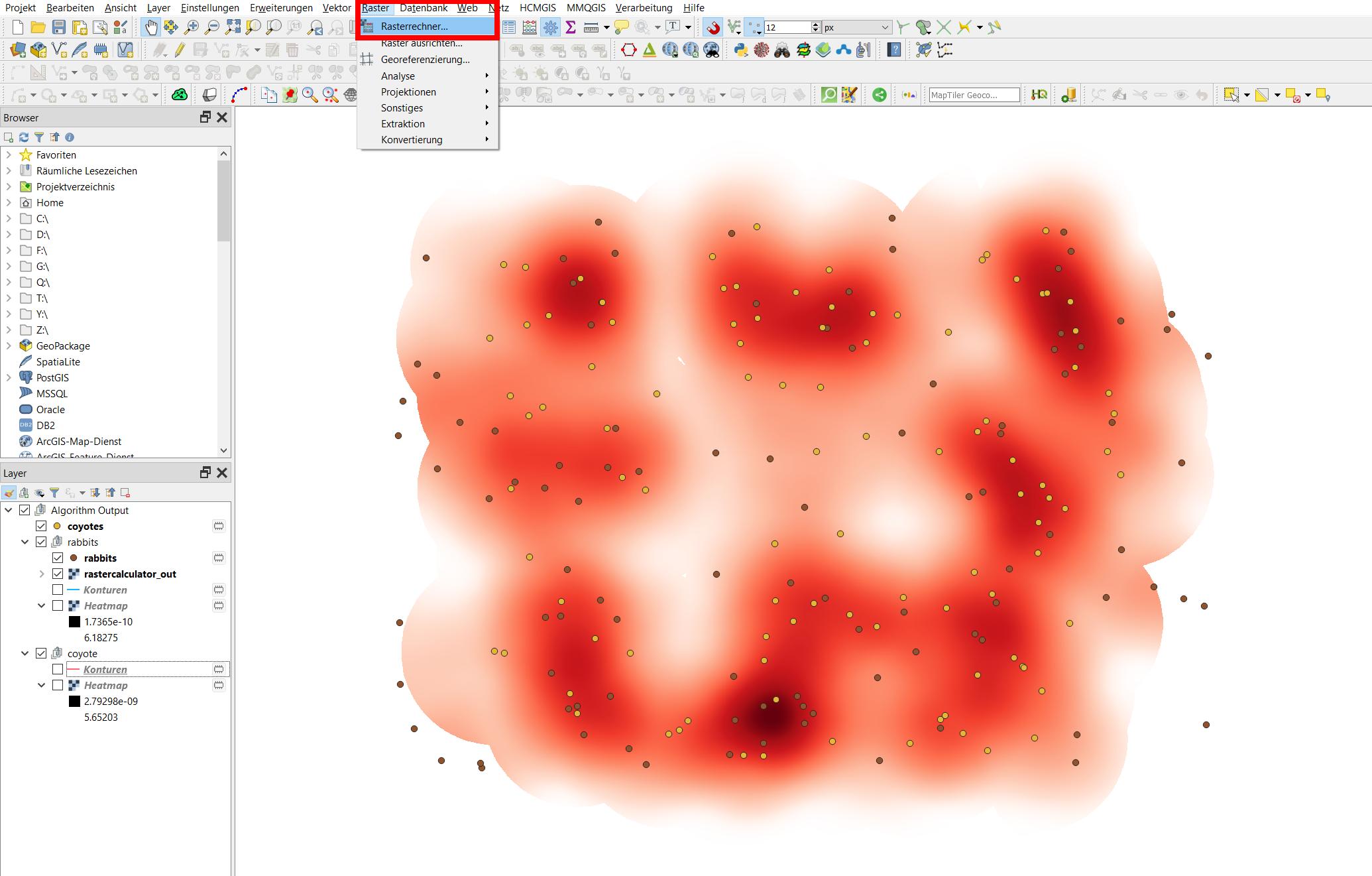 That's how the raster calculator looks like - just add the two rasters as shown in this screenshot and define an output path where the new raster should be saved: 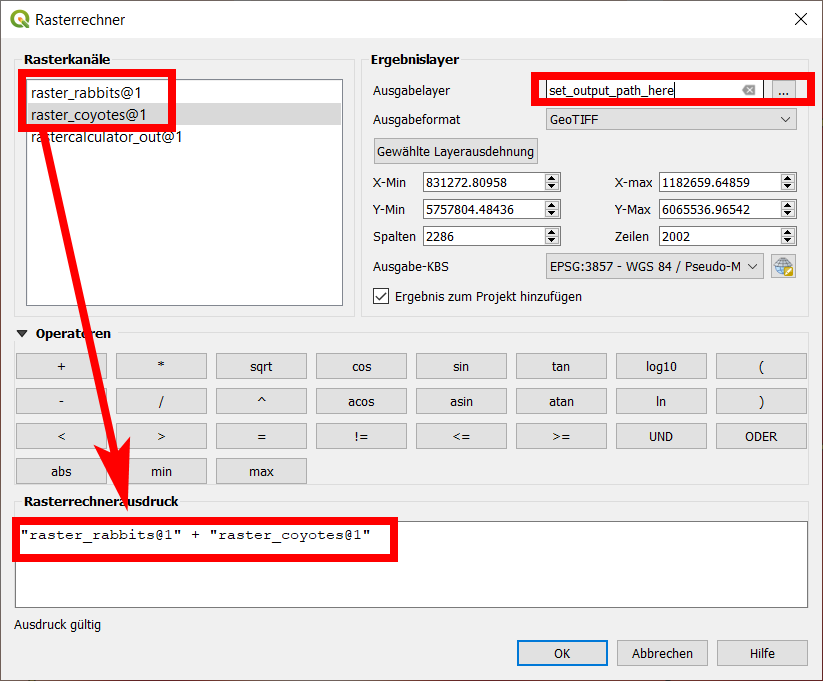 A different approach (for visualization only) is to render your points as Point Cluster symbology and set the symbol size to data driven override with the variable @cluster_size as seen on the screenshot: 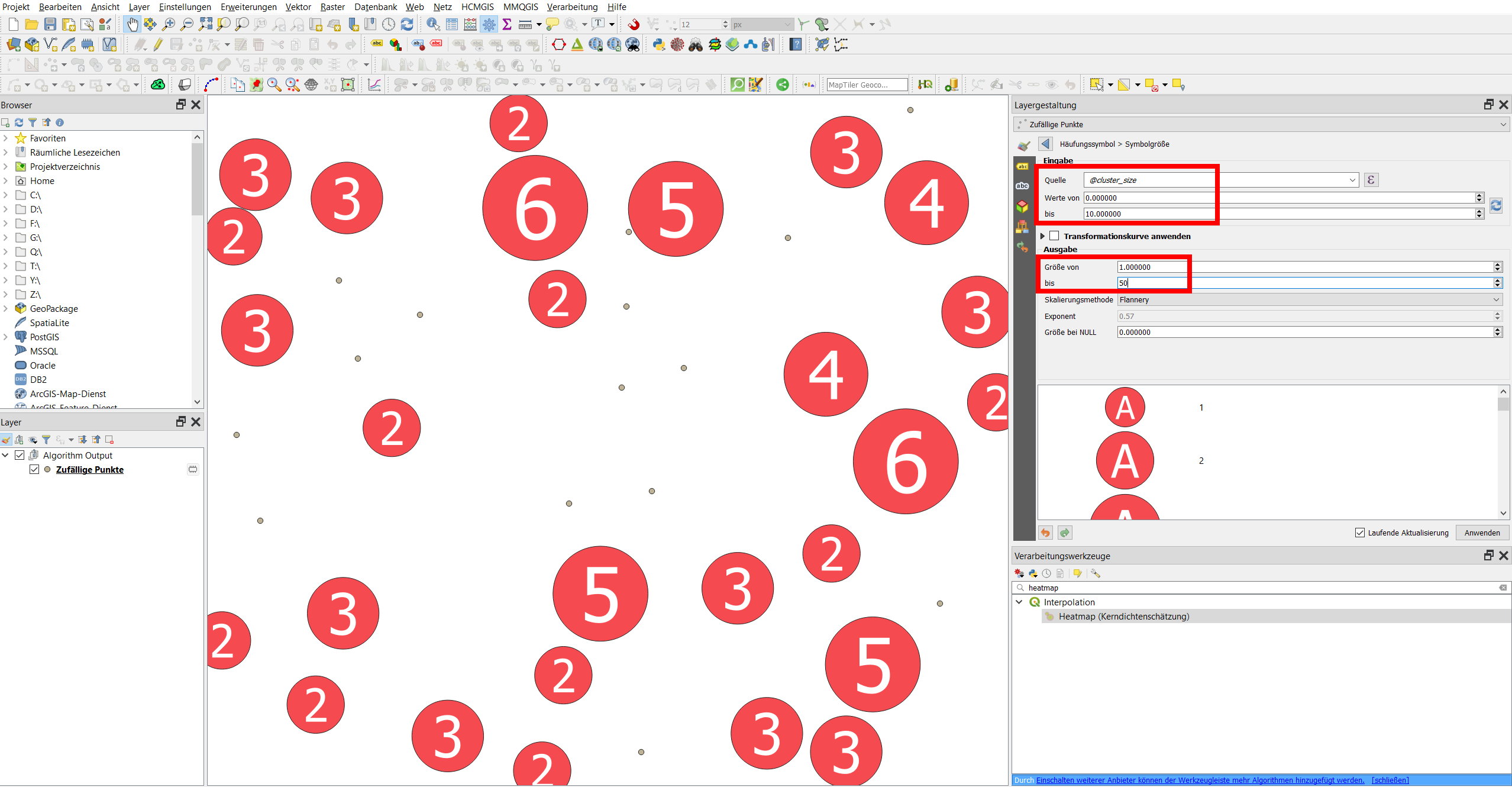 These workflows are first steps to get an idea about your data. As mentioned in several comments, reflection about the goal of your work and the explanatory power of your hypothesis are crucial and should be answered before proceding data. Get a conceptual understanding of what you want to do and only than define your workflow.

Hopefully the steps presented here can help on the way to get there and to get a better idea about spatial distribution and possible correlations. However, proceding data in different ways is just a matter of technical skills: there are a lot of tools you could use for your data. But that alone will not help you much. To get meaningful results, you should first have a conceptual understanding before you use any software.

Not the answer you're looking for? Browse other questions tagged qgis proximity distance-matrix or ask your own question.

1
How do I combine heatmaps in QGIS?