I need to geocode an Excel file of addresses in Greece ("number", "name", "address", "city", "country" are my columns) using MMQGIS with OpenStreetMap.

I took all the steps to turn it to a .csv-file (converted .xls to .txt, then to UTF-8 .txt, then to .csv). I managed to create valid locations to save my output files, ran the Geocoding, but, my shapefile -as well as the attribute table- is empty of content. 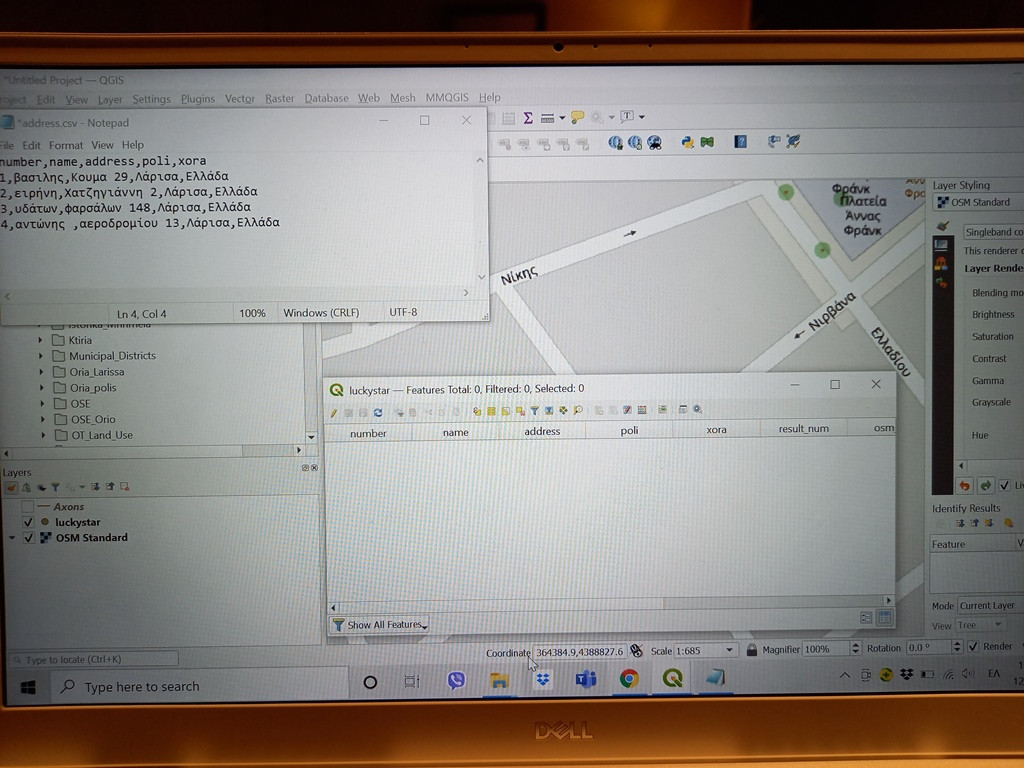 Any ideas and suggestions would be very welcome!

PS: My actual Excel file is quite longer, this is a file for practicing.

The short answer: this is a limitation of the plugin - it does not accept any non-ascii characters. The MMQGIS website states about the input CSV file:

This file should be encoded in the UTF-8 character set. Although other 8-bit encodings (like Windoze ISO-8859-x) will work if only ASCII characters are present, non-ASCII characters may cause unpredictable behavior.

However, even when saving it as a UTF-8 encoded CSV, it does not work even when using just one ASCII-character (ü) in an address.

Workaround: convert your addresses to latin characters or use an alternative tool for geocoding.

Longer answer as suggested by empirical evidence after some testing: The MMQGIS plugin has a problem with non-ASCII characters. For a test-case, I used a few addresses (street/house-no) I got from OpenStreetMap (OSM) to be sure that they are in the OSM/Nominatim database I use for geocoding.

With simple names such as Hallerstrasse 54,Bern it works perfectly. When I add a nearby address, Brückfeldstrasse 12,Bern it does not generate any output for that, even if OSM knows this address. So clearly the plugin has difficulties interpreting the german diacritic Umlaut (ü). As you use greek characters, this applies to your addresses as well.

However, when I tried to transliterate an address from Greece to latin characters, it worked. See this address here: https://www.openstreetmap.org/node/4711635403, Εγνατία 24, Θεσσαλονίκη. When I use as an input Egnatia 24,Thessaloninik,Greece, it works perfectly. The same is true for other non-latin scripts like georgian alphabet: Abo Tbilieli Street,Tbilisi,Georgia works, but აბო თბილელის ქუჩა does not produce any results. When you paste this non-lating string to the search field on https://www.openstreetmap.org/, it finds the correct place. So Nominatim can handle non ascii characters. That's why the limitation must be on the part of the plugin.

Workaround: convert your addresses to latin characters, even though that probably will not be that unambiguous as in the case above. It seems that OSM/Nominatim has also some own translitaration in the background. Even when looking for Derkon, Thessaloniki, it correctly finds the street (in the plugin as well), even though the street name is not available in latin characters in the OSM data set: https://www.openstreetmap.org/way/14886850

Not the answer you're looking for? Browse other questions tagged qgis openstreetmap geocoding mmqgis encode or ask your own question.