I am using the QNEAT plugin to calculate catchment are/travel reach over a street network. The network is valid and projected correctly. I have tried changing the cell size and topology tolerance without it making any difference. Running QGIS 3.10 on Mac.

My problem is that the interpolation process simplifies the output to such an extent it is not usable. The picture shows the network and the output polygon. As you can see the polygon fills up gaps in the network in a way that it should not. In this case, the polygon extends far out in the sea where no network is present. Am I doing something wrong or do I not understand the functionality of the tool? 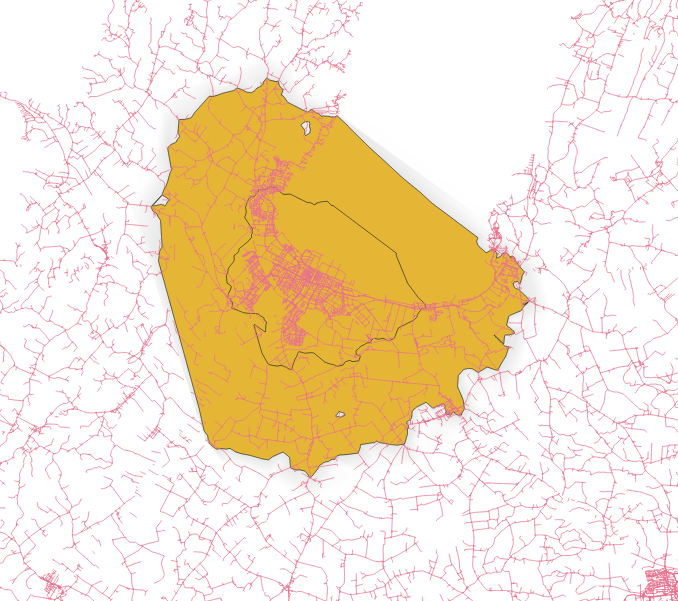 I would not consider this a bug as the plugin runs excatly the way it is intended to. The very concept of Iso-areas implies that whole surfaces and not just networks (lines) are covered, thus even areas that do not line on the network. This in itself, conceptually, does not represent reality 100% as we all know from our everyday experience. Technically, if you run a network analysis, you can only reach points lying on the network lines, everything else, beside the network, is just interpolated. So you should rather set a clear critearia what means "reachable" in a Iso-area network analysis: how far away from the network (lines) is still "reachable"?

Consider a real street network in a city: you can't reach all areas that lie outside the street itself: private courtyards, a closed compound of a factory etc. The same is true for a lake, river, a cliff etc.

So rather than consider this a bug or malfunction, it's more convenient to critically reflect the very concept of Iso areas. They are a model that does not necessarily correspond to an actual reality - in some cases yes:parks are areas perfectly reachable, in other cases no: the compound of a prison is not (normally) accessible, even if it is surrounded by a network of streets that is reachable.

The problem you are experiencing is due to a missing functionality in QNEAT3 which cannot be provided using the current QGIS API. Currently, QNEAT3 is not capable of accounting for waterways/lakes (which seems to be the case in your example). The interpolation method for the isochrones therefore spans the iso-polygons in this areas too. Other than that, the isochrone seems pretty reasonable to me, given the network errors (disconnected links in the south west of the isochrone).

Not the answer you're looking for? Browse other questions tagged qgis network or ask your own question.