I'm struggling with a rather odd problem with the python package OSMNx.

Now I am using OSMNx and its get_nearest_edge() (and get_nearest_edges(), respectively) to find the nearest OSM edge. As the graph input, I use a rather small bounding box including the coordinates, as retrieved by, e.g.,

but I guess it should also work, if you'd get the whole Berlin map.

Normally, I have a whole pandas data frame of points and I run

For example's sake, let's run instead

Using the latter command, I end up with a tuple of OSM nodes specifying the edge I should be looking for: (1873509499, 732609150, 0). Now there are two problems. First, the OSM edge depends on the graph I am giving to that function (but note that both graphs G stated above contain the example point). Second, the nodes attained by this output are not really close to the original point (compare here).

Why won't the function give me the actual nearest edge, even though there are nodes much more close-by than the ones I am attaining? In the picture below you can see the node that is my desired output (orange) and the node attained by get_nearest_edge(). 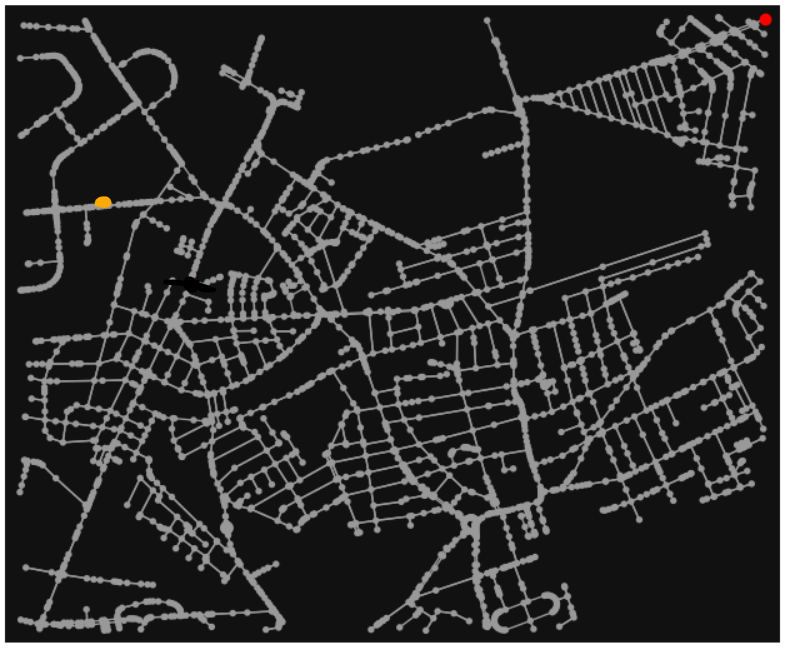 The two problems are:

For the get_nearest_edges() method, don't use a 0.0001 distance, because it is expressed in degrees, use something like 100.

Not the answer you're looking for? Browse other questions tagged python openstreetmap osmnx or ask your own question.

1
creating vector layer from OSM file using OpenLayers
5
Randomly select a record to update using arcpy.da.UpdateCursor
3
How do I apply Dijkstra's algorithm in Python with PostGIS data?
7
How can I know why an OSM way cannot be used for routing, and how can I fix it
1
Update driving way speed in open trip planner and how to [easily] obtain the needed ids?
6
Randomly sample from geopandas DataFrame in Python
1
Randomly subsetting % of polygons by class/attributes using ArcPy