I am doing a project in which I am determining which areas of New York City can be accessed within a five- or ten-minute walk of a subway entrance. I have done this in the past in ArcGIS, and am trying it out in QGIS. The goal of the project is to determine which areas of the city would become accessible within a five- or ten-minute walk if closed subway entrances, of which I have accumulated a list here, were reopened. I used the QNEAT3 tool to first look at the service areas for open subway entrances, based on the city's street network.

In ArcGIS, I could create non-overlapping service area polygons to allocate areas to the closest subway entrance. I have not seen any way of doing this in QGIS. When using QNEAT3, all the areas within, for example, five minutes of an entrance, are in a single layer, which is not very helpful, as can be seen in this screenshot below.

For some reason, the polygons for areas within a closer range of an entrance, i.e. 60-120 seconds, are sometimes in the incorrect spot, being underneath layers like the 300-480 second polygon layer. If you compare the two images below, you will see that if I uncheck this layer, the 60-120 second layer is visible. In ArcGIS, I had no issues with this at all.

How do I remedy this? 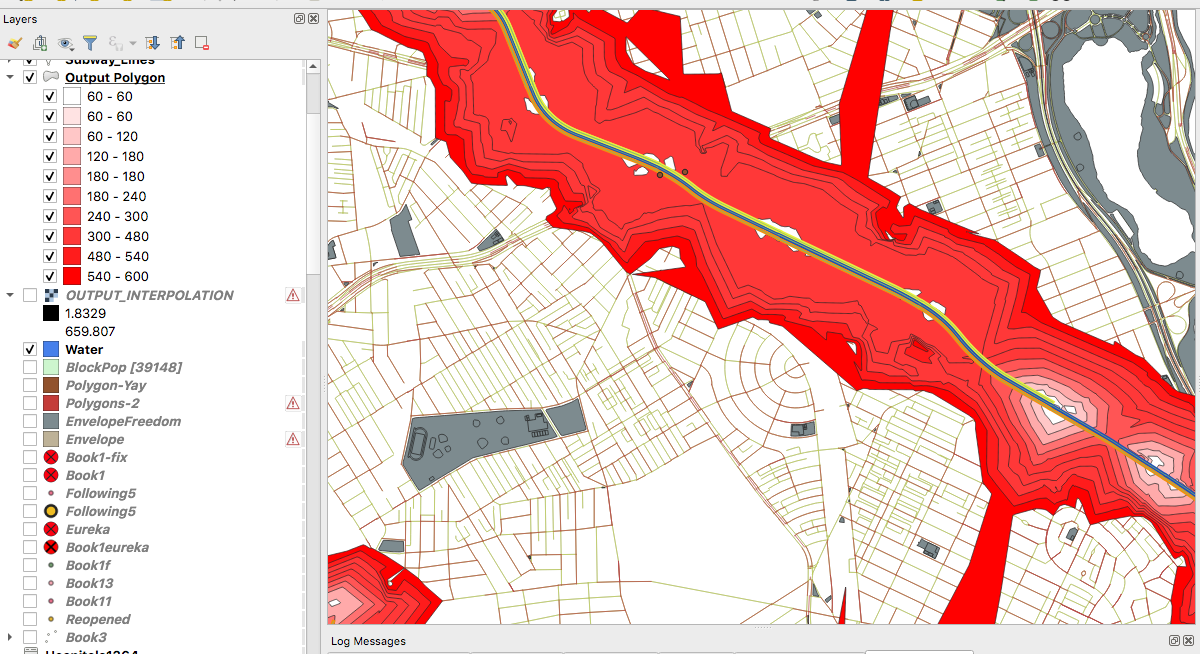 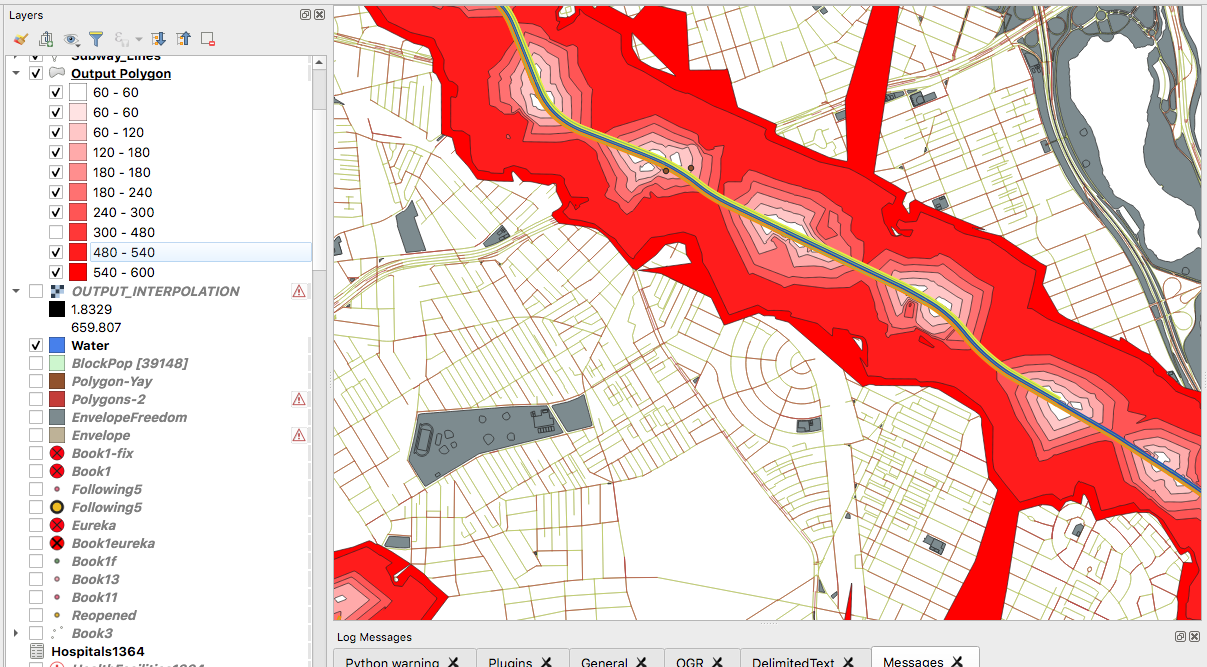 Another issue is that there are spikes in the polygons, especially those in the 480-540 and 540-600 second layers, which should not be there. These areas are clearly not within ten minutes of an open subway entrance. I have no idea what error is causing them.

Does anyone have an idea? 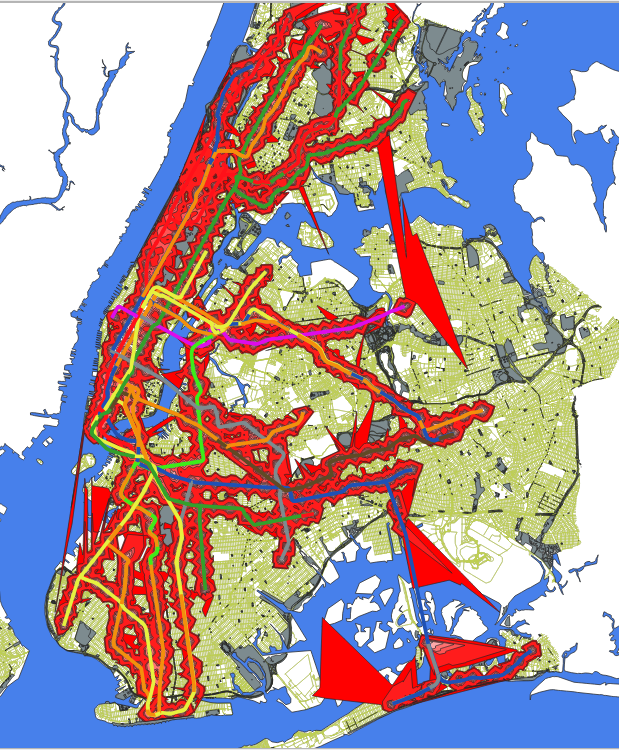 This major one occurs over a body of water: 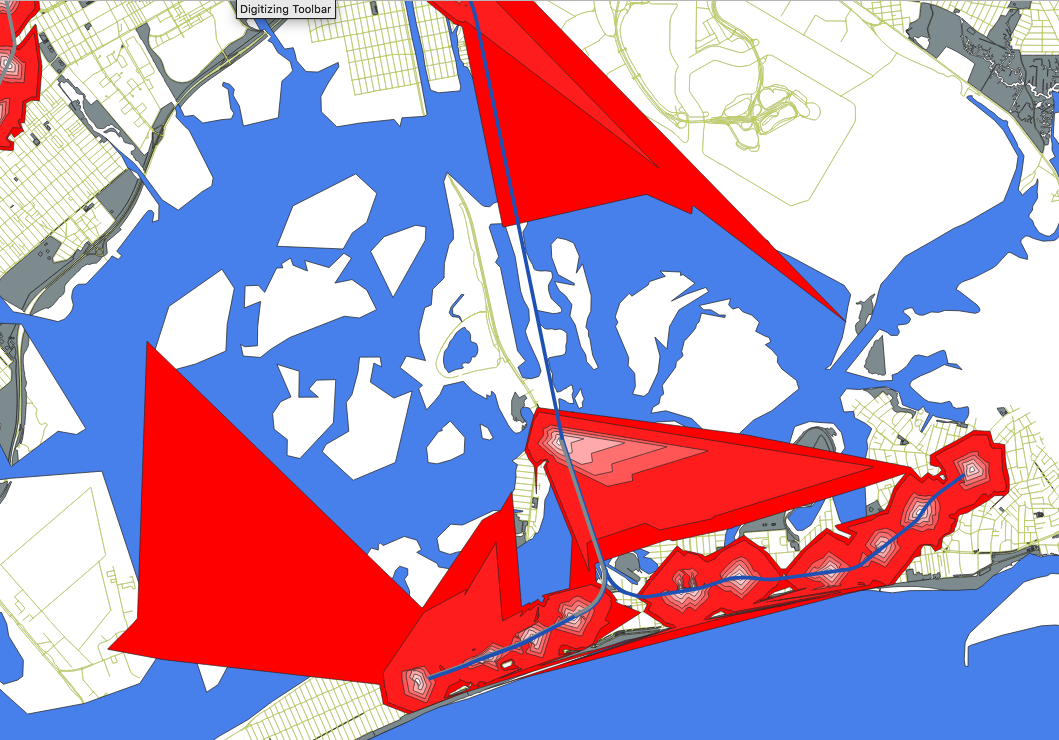 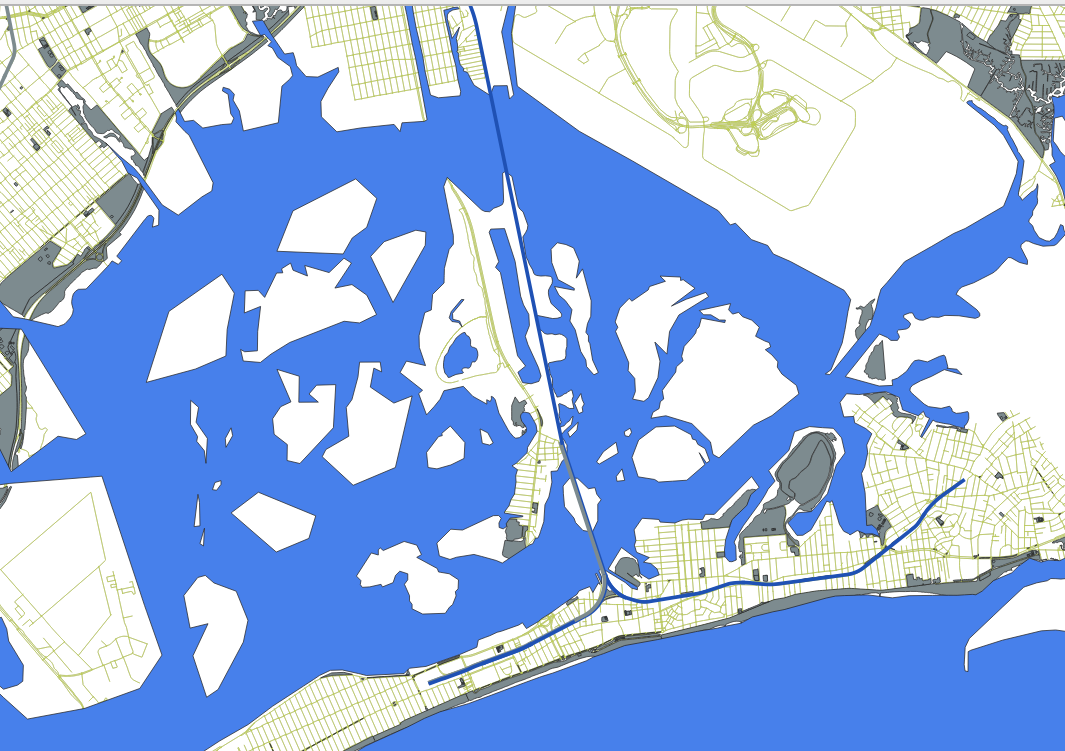 This one for some reason has a polygon connecting Lower Manhattan with Brooklyn over New York Harbor. 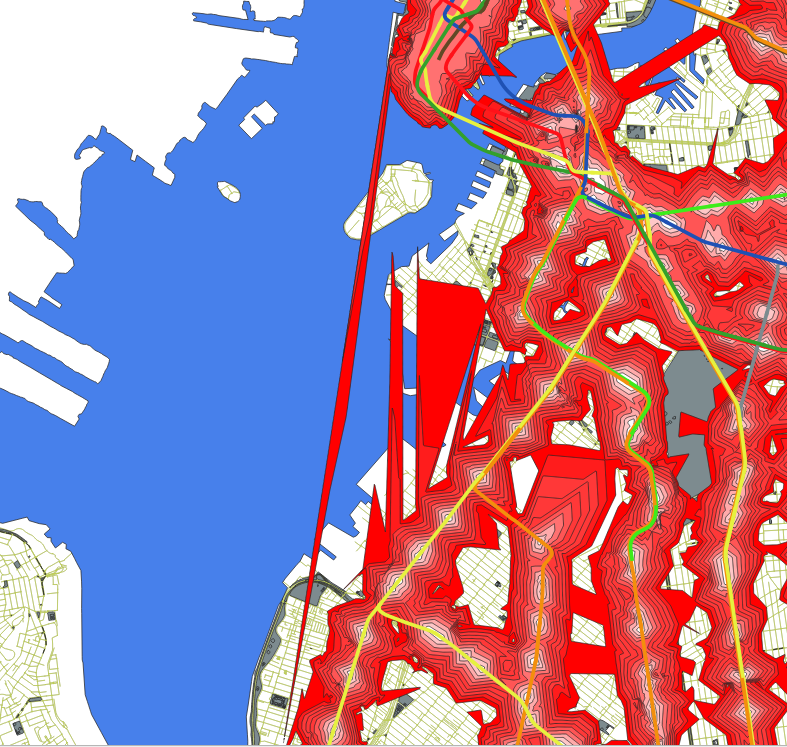 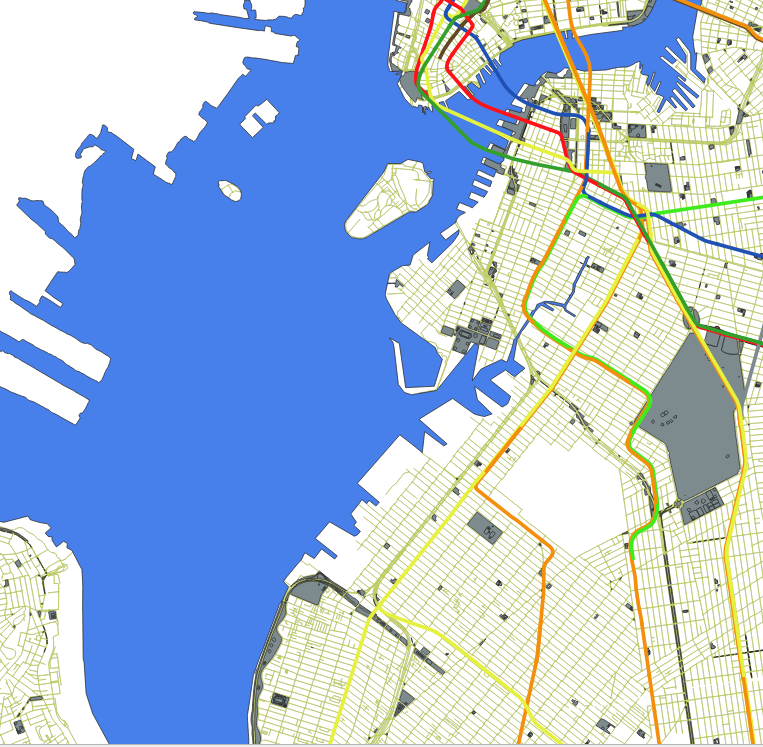 You also have a big one here in Queens. 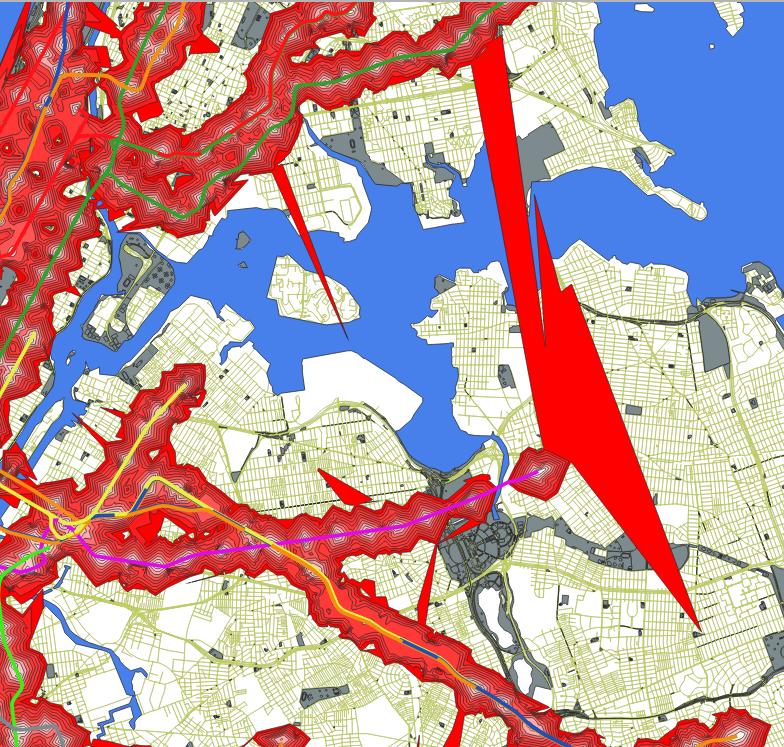 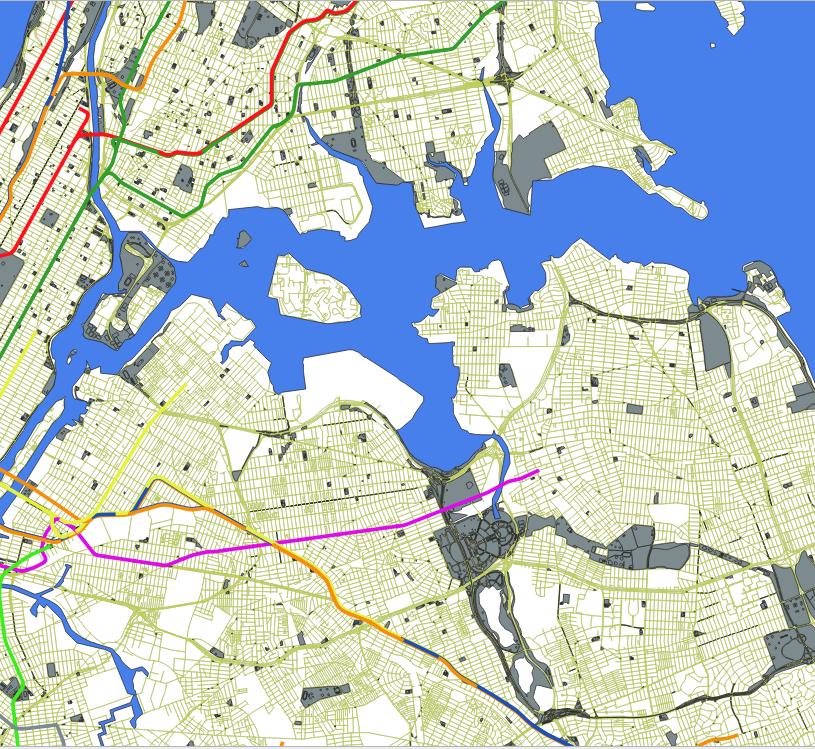 I have discussed this issue on faulty isochrones in multiple questions here on GIS.SE and Github:

To cite from my answer in the first link:

The problem you are experiencing is due to a missing functionality in QNEAT3 which cannot be provided using the current QGIS API. [...]

QNEAT3 is using the QgsTinInterpolator class for interpolating a cost raster based on reachable network vertices in the graph. This interpolation method causes the artifacts you see in your analysis output.

Possible solutions to resolve the issue:

Not the answer you're looking for? Browse other questions tagged qgis isochrone service-area or ask your own question.