Sentinel-2 imagery is available in the default L1C form, or in the atmospheric-corrected L2A form.

I haven't been able to find a L1C - versus - L2A comparison that would provide the pros and cons of each. In the absence of such a comparison why wouldn't I always want the corrected L2A form? Are there situations where L1C would be preferable?

Atmospheric correction is particularly usefull if you need consistency between dates and/or adjacent tiles. Some studies showed that the use of atmospherically corrected images improve the subsequent use of the data. In addition, L2A images also contain flags for unusable data (e.g. clouds, snow...). The drawback is that the flags may contain some errors and that atmospheric correction could distort the data.

However, there is no perfect atmospheric correction in my humble opinion: it depends on your application (time series or single date), on your study area (tropical or not) and on your topic resarch (marine, lake or terrestrial). Using the default (Sen2COR) algorithm is therefore not always optimal (but it generally works well). Giving more recommandation without a specific case study would be opinion based, but you can have a look at iCOR, ACOLITE or MAJA and see if they correspond to your needs. For example, MAJA is designed for long time series while SEN2COR is designed as a scene-by-scene processor.

Finally, if you want to combine S2 with Landsat8, there are some harmonized products which could be more useful. Either from Landsat perspective (HLS, Claverie et al ) or from the Sentinel perspective (SEN2LIKE, Saunier et al)

So, to conclude, 1)you can use L1C with the latest algorithm if you need full control of the preprocessing chain, 2) you can trust L2A to save computing resource (and reduce the carbon footprint of your workflow) and obtain consistent analysis and 3) you should use an harmonized product if you want to combine S2 with L8 data.

With this being said, L2A imagery has a shorter availability. If you look at COPERNICUS_SR (Sentinel-2 L2A) and COPERNICUS_TOA (Sentinel-2 L1C) in Google Earth Engine, you will find that data availability differs by 2 years: https://developers.google.com/earth-engine/datasets/catalog/sentinel-2

So if you need a longer dataset for your analysis you might be better off with choosing L1C, but if 2017 - onwards is long enough for you, than it's better to use L2A.

If you are interested in researching on atmospheric corrections than you should start with the L1C data (Top-Of-Atmosphere).

Yes, there definitely are situations when L1C is preferable!

The problem with L2A imagery is that it attempts to fill-in cast-shadows, and doesn't do it very well when they are pronounced, causing unsightly super-saturated artefacts in, or adjacent to, those shadowed areas ( a saturated 'ghosting' or 'dodge' effect: over-brightened, saturated areas that shouldn't be there — see below ). It also flattens the land relief in its attempt to counteract / standardize natural illumination. In fact, visually, L2A often makes it very hard for a lay person to make sense of the forms they are looking at.

Below, is an example of L2A vs L1C imagery ( same date ) for a section of the island of Kauai, which has extremely sharp, jagged mountains — and canyons! ...Can you tell what is going on with the relief in L2A? I certainly can't, or not well, anyway; whereas, with L1C, it's immediately obvious ( visually comprehensible — unambiguous — at a glance ). 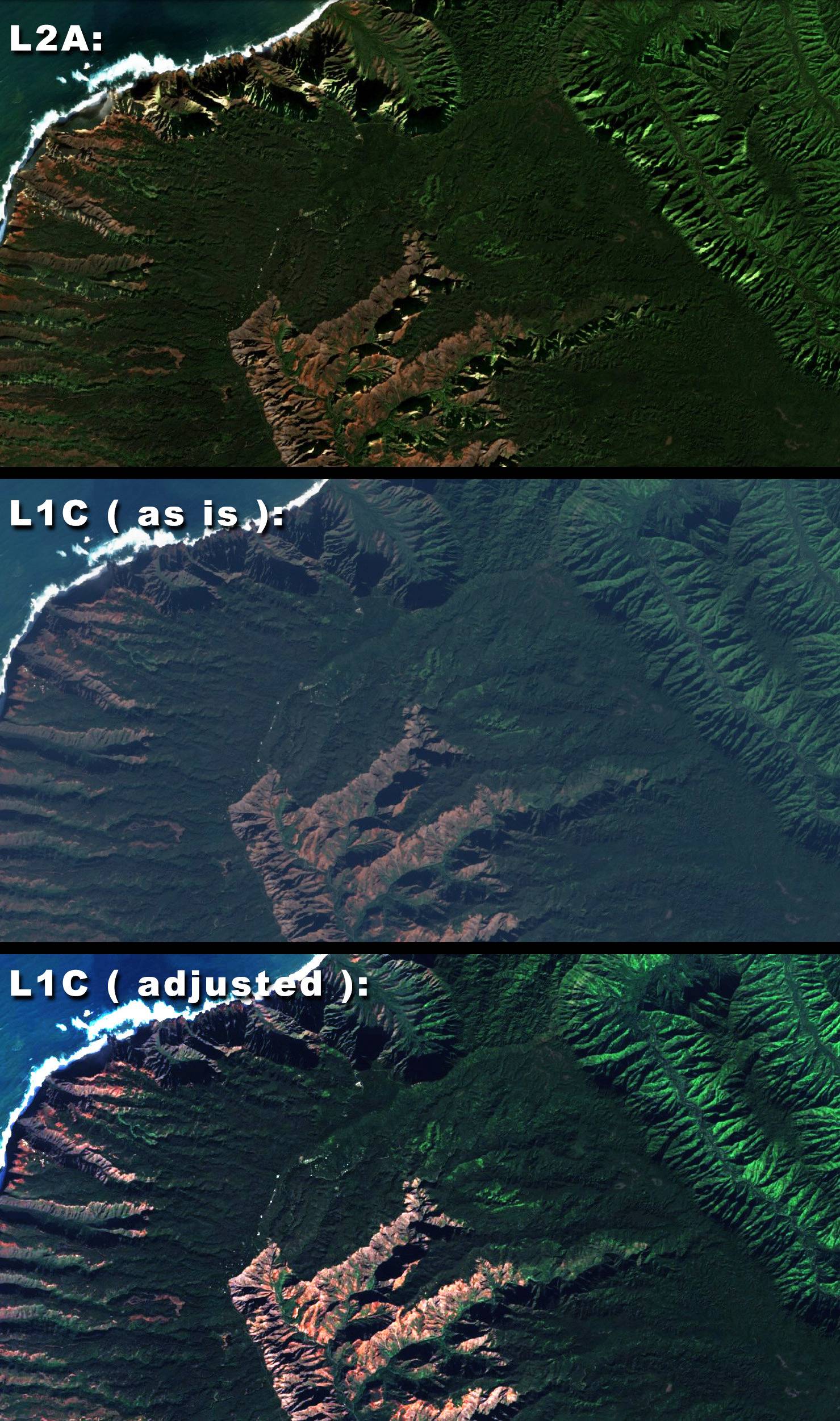 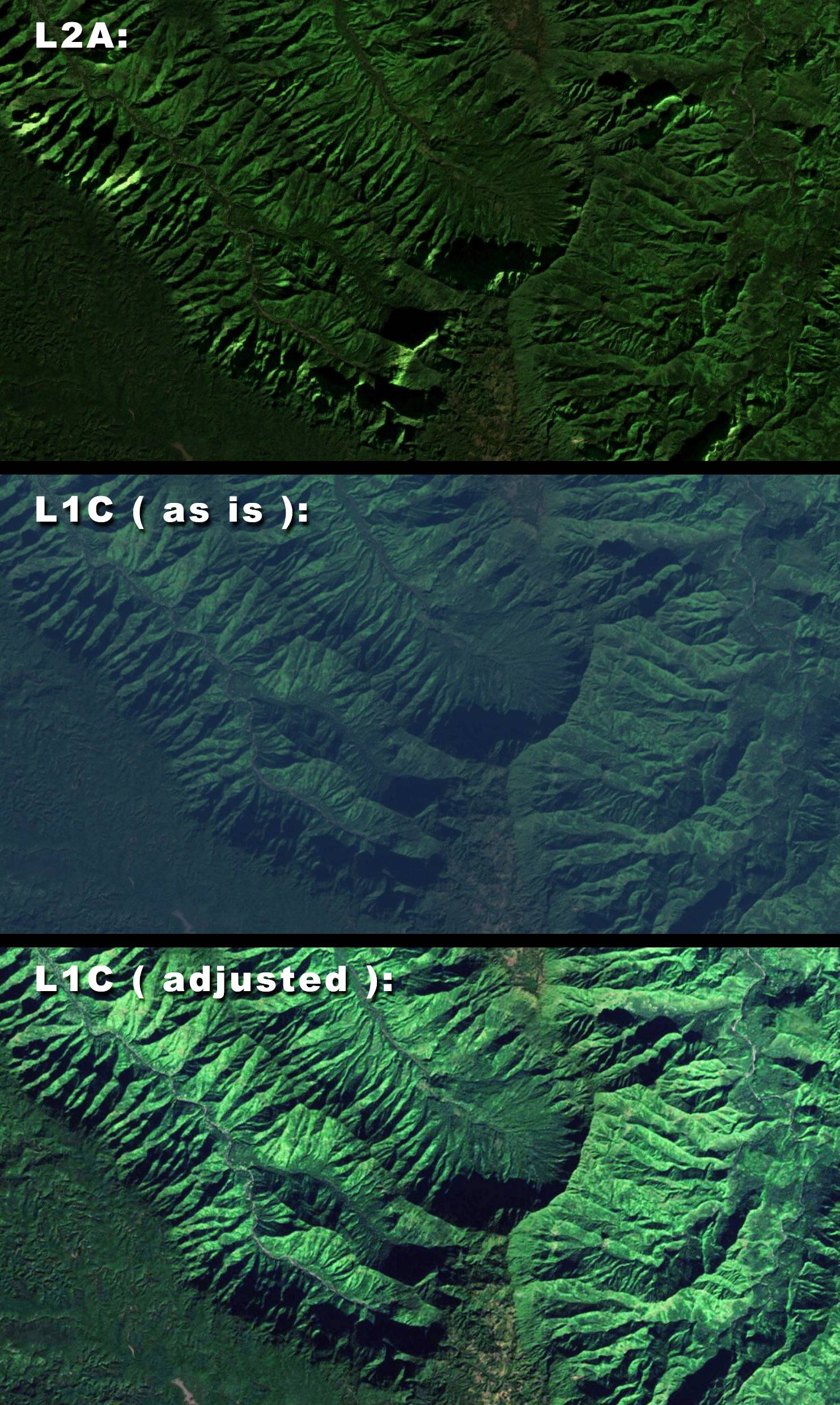 Obviously, despite atmospheric fogging and whatnot, L1C is more realistic, if you are interested in depicting the Earth surface the way it might actually look to a human observer from up-high — with their own eyes ( assuming you do some post-processing to increase contrast, and some color-correction ).

L2A, however, might serve better as the basis for a ready-made diffuse map, aided ( multiplied ) by a "hillshade" layer, or applied to a 3D model. But, even for that purpose, I believe producing a mosaic based on dates when the sun was close to perpendicular to the ground would yield a much more realistic, and pleasing, diffuse map.

Below: a date and time when the sun was close to directly overhead, producing a nice diffuse map, with few, if any, cast-shadows: 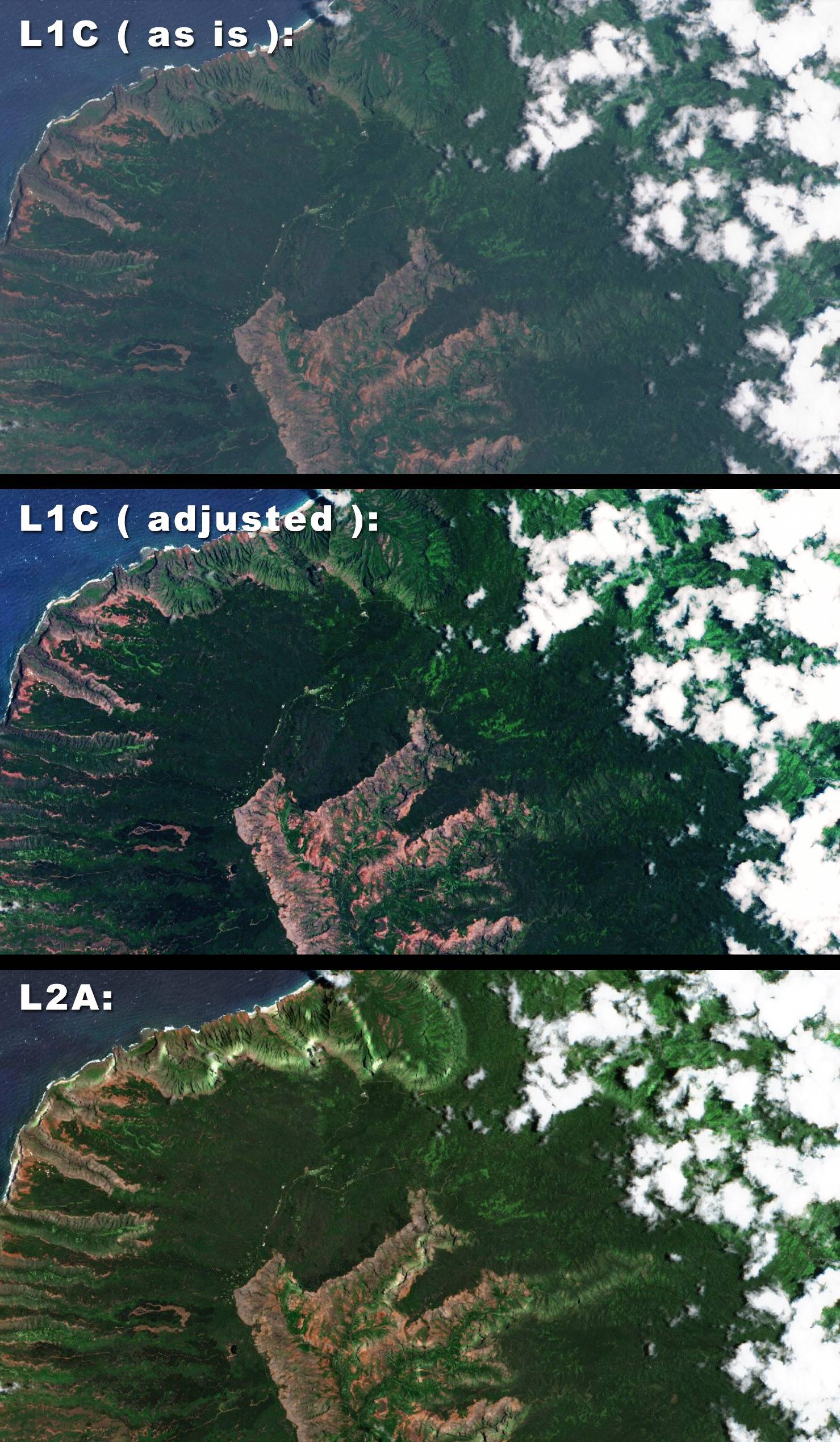 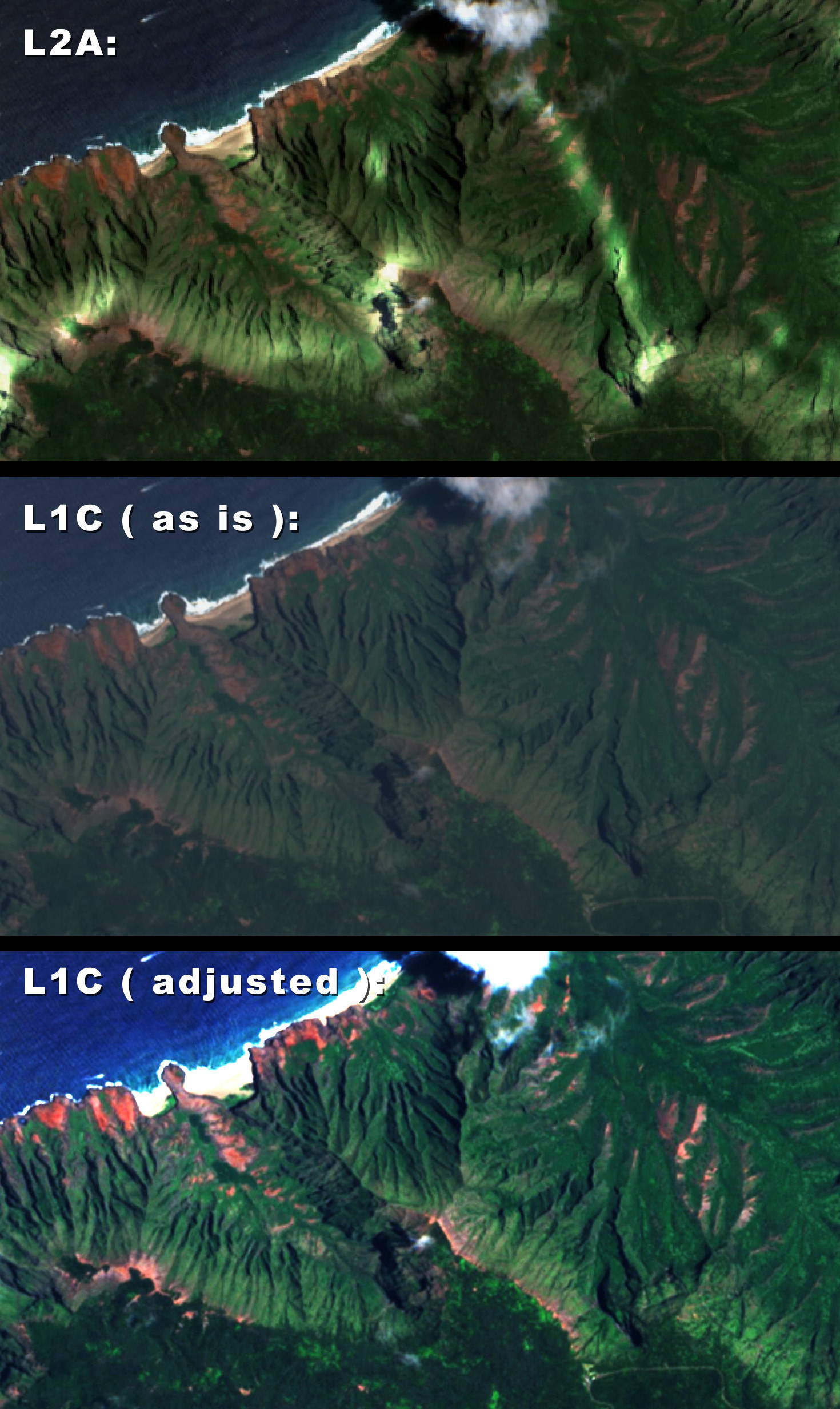 In my opinion, L2A is okay in a pinch, and for some GIS applications, but visually, I wager you can't really beat L1C — assuming you take the time to process it yourself.

Note: the adjusted versions where done manually, in Photoshop, based on my monitor's gamma and color-space, so might look either too bright / dark, or 'contrasty', on yours. Some creative license for setting contrast and color-balance, in this use-case, is expected however.

Pros and cons depending on the application, but in most cases, the availability of clouds, cloud shadows on L1C images affects all the calculations in scientific analysis, such as classification, the radiative heating of the earth surface-atmosphere system, data assimilation, etc. That's why we mask the clouds or prefer to use atmospherically corrected L2A images.

I have found a paper, it is not a comparison but you can make your own comparison based on their product description; https://www.mdpi.com/2072-4292/9/6/584/htm

Not the answer you're looking for? Browse other questions tagged imagery sentinel-2 digital-image-processing or ask your own question.