In short:
A pointer from one point towards another, angle calculated with any Bearing tool / formula in hand, did not show correctly, but some degrees wrong. Calculate made in lat / lon values and shown in another CRS than calculations were made. EPSG:3067 is used as map CRS.

How to "convert" the bearing from CRS to another and with which extra parameters?

Long story:
I want to have a pointer on map, which points from its current position over map to my desired destination - an arrow, that I can point from one to another, drawn as overlay on openlayers map. For that the tool seems to be to calculated correct Rhumb-Bearing.

So codewise I place a pointer symbol (circle where inside an centered arrow) and I rotate it with calculated bearing value.

I have learned about Bearing, that you can calculate it from [lat,lon] pair of coordinates either by hand 1 or using a library, like turf.js [2], [3]. I have tried all these three approaches, but my pointer does not point to correct direction. The issue is what is happening in my source [4]: I use a map with EPSG:3067 coordinate system, whereas

and there comes the issue: in [4] they say that Bearing may vary depending on crs. So, my pointer, whether it is calculated with Bearing or Rhumb-bearing method, always has some deviation in the direction, at least on large distances, say > 200km.

I would like to be able to find a way to calculating the bearing in EPSG:3067 or somewhat to convert the one I get with turf.js or my current formula with lan-lot values.

How is bearing converted (one my sources said it alone cannot be converted)?

At least the formula and needed params.

I use map of Finland, which is quite north, and that may have an impact.

The result kind of shows to correct direction, but not directly (some degrees wrong, if you see with a ruler.

target calculated from extent of a polygon, I gave the extent. Code for calculation:

[5] Do Leaflet and turfjs have different projections?

When you calculate bearing with turf.js, it gives a angle/direction on a sphere. When sphere is projected to a flat surface, its spheric geometry is transformed/deformed and as a consequence, this angle generally does not point to the same direction on a flat surface. Difference between angles before and after projection depends on type of projection and the coordinates of the point.

Difference in angles depends on type of projection and point coordinates. In your case, where projection is UTM zone 35N, central meridian of this projections is at 27° of lat. In the case of your points, they are slightly off this meridian (23°), so difference is not big (blue line us turf bearing): 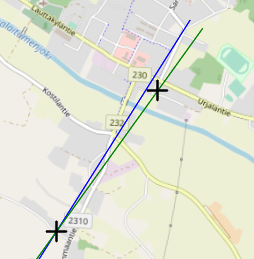 If you move points further away from central meridian (9°), difference is much bigger: 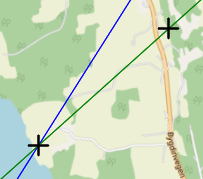 If you put your points on the meridian, difference disappears: 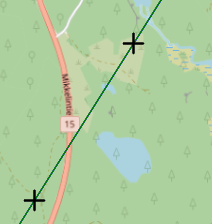 Not the answer you're looking for? Browse other questions tagged openlayers direction turf bearing or ask your own question.

2
Azimuth (bearing) changes depending on map/project projection
2
Do Leaflet and turfjs have different projections?

5
Openlayers 3 WMS custom projection wrong extent
4
How can I make these two MapServer WMS layers align correctly with each other in OpenLayers?
1
qgis2web Initial view problem