Merge several polygons/features into one continuous area not working

I am using QGIS version 3.10. I have a farm boundaries layer (https://drive.google.com/drive/folders/1xYZmSboM75GACCWQyx-06wZ3EdHBcMrM?usp=sharing), and want to merge certain adjacent polygons into one fenceless area (the resultant merged area will be a nature reserve in which the fences between farms have been removed). 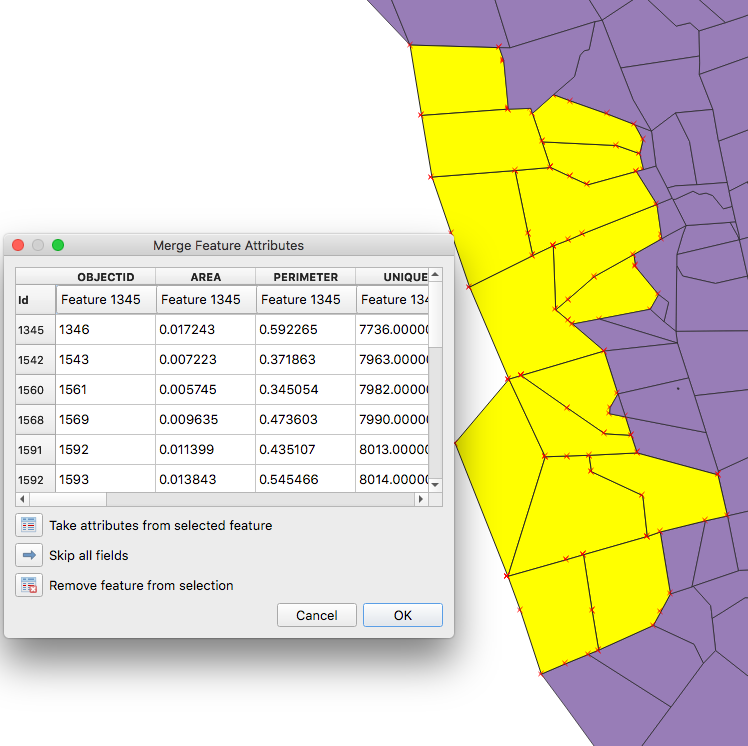 I tried to use the following method to achieve this: toggle editing -> clicked on polygons I want to merge -> merge selected features. A table "Merge Feature Attributes" pops up and from here I am not sure what to do, because, whichever option in the merge features table I select, the result is not what I want. For example, if I say skip all fields the result is that only some line segments have been removed: 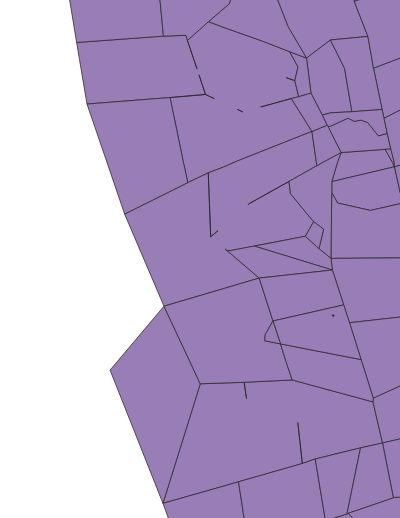 The ultimate aim is to have the farm boundaries layer with the line segments between the selected polygons removed. I am analysing the movement of wildlife (which in the nature reserve is unobstructed by fences).

Additionally, as a second question, I would like to find out how to use a different method to achieve the same goal: I have the same farm boundaries layer (green) and a national park layer (pink). I deleted the farms that belong to the nature reserve (white area): 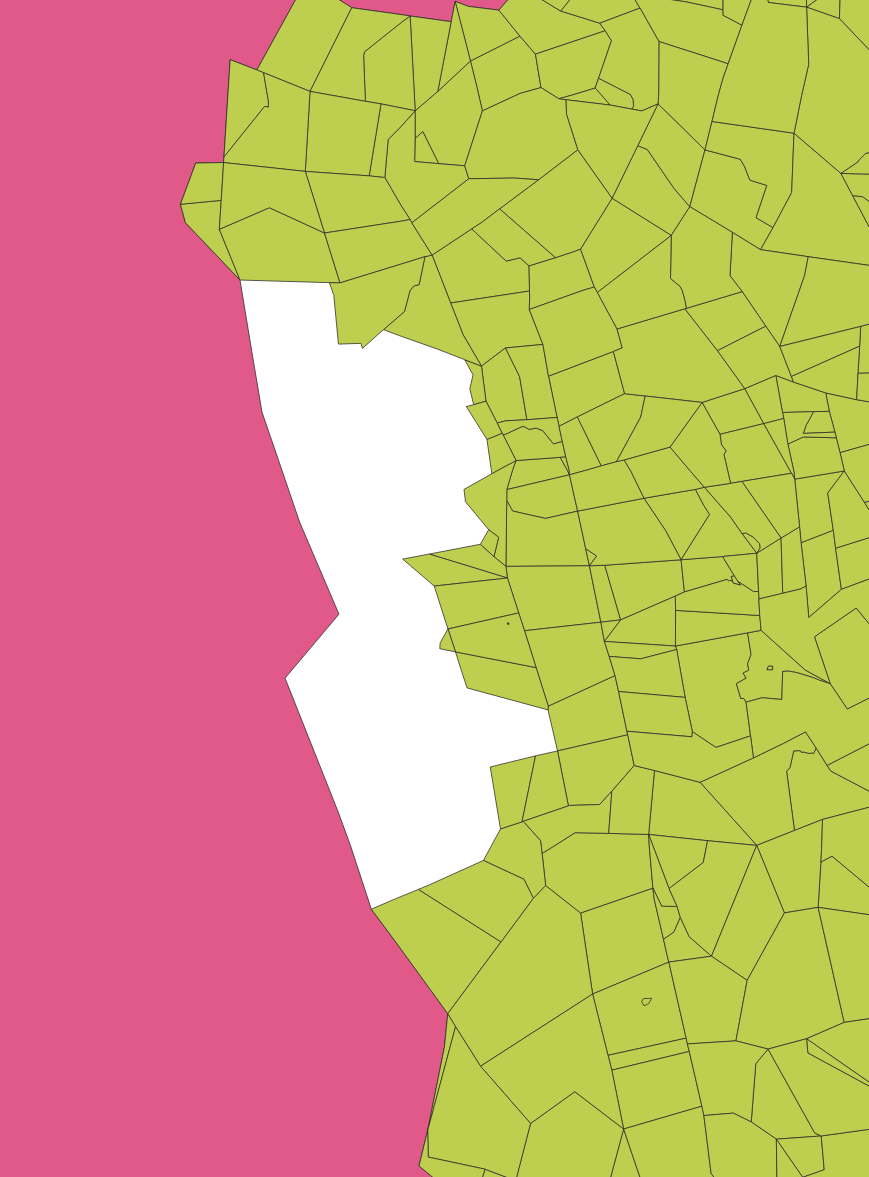 Is it possible to save out the white area as a new polygon (without having to use digitising tools) and then merge it with the farm boundaries layer?

There is another option to get rid of the gaps between to polygons. Use the tool Snap geometries to layer form processing toolbox. The trick is to find optimal settings: if tolerance is too high, the tool will affect the polygon boundaries too much, if you set the tolerance too small, you will be left with too many gaps left.

With this two simple steps, you get rid of almost all gaps and invalid geometries. The remaining few can be dealt with manually or using Geometry checker, but depending on which polygons you need to merge, this will not even be necessary.

Here the updated answer/solution to my question (in detail):

Merging the polygons was not working because of topology errors in my shapefile (in my case these errors were due to slivers/gaps between polygons). There seem to be several methods in QGIS (and GRASS) one can use to tackle topology errors, but the following worked best for me:

The result was a clean layer. In order to merge my farm polygons, I used the Aggregate tool in the Processing toolbox (here you can make selections on what you want to do - for me it was important that the area of the merged polygon was a sum of all areas of the input polygons). The output was the merged polygon, which I had to then combine with my original farm layer.

I don't know if I took the best route in combining both layers (there must be an easier way), but this is how I did it: I selected all the features on the original farm layer that I wanted to merge > Toggle editing > Delete selected. Then all I had to do was go to Vector > Data Management Tools > Merge Vector layers > Select both layers as input (original farm layer and merged farms layer) & make sure your CRS is correct. And done.

Another way is the following, but it was less useful as it only cleaned the topology errors of my merged farm polygons (I think):

I suggest trying "Dissolve" first. Select those adjoining areas then go to 'Vector'-> 'Geoprocessing Tools' -> 'Dissolve'. Choose your farm boundaries feature, check 'Selected features only', run it. You can then run 'Merge' as you mentioned in your original question. 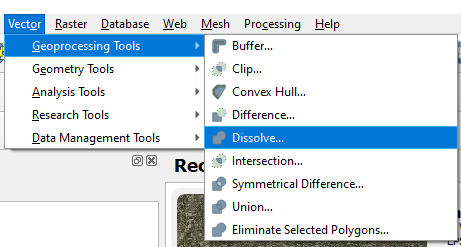 Downloading your data and merging the selected features as in your screenshot, I got the same sliver polygons/gaps. To get rid of them in an easy way, I applied a buffer of 0.005 m (so that all gaps are covered), than I applied again a buffer, this time of -0.005 m to get to outer boundary back in place.

See the screenshot: the resulting layer with polygons in red outlines and yellow selection of the merged polygon as well as original polygons merged (for the selected features) with the remaining "lines" (in fact gaps) that disappeared form the buffered layer (no red boundary lines): 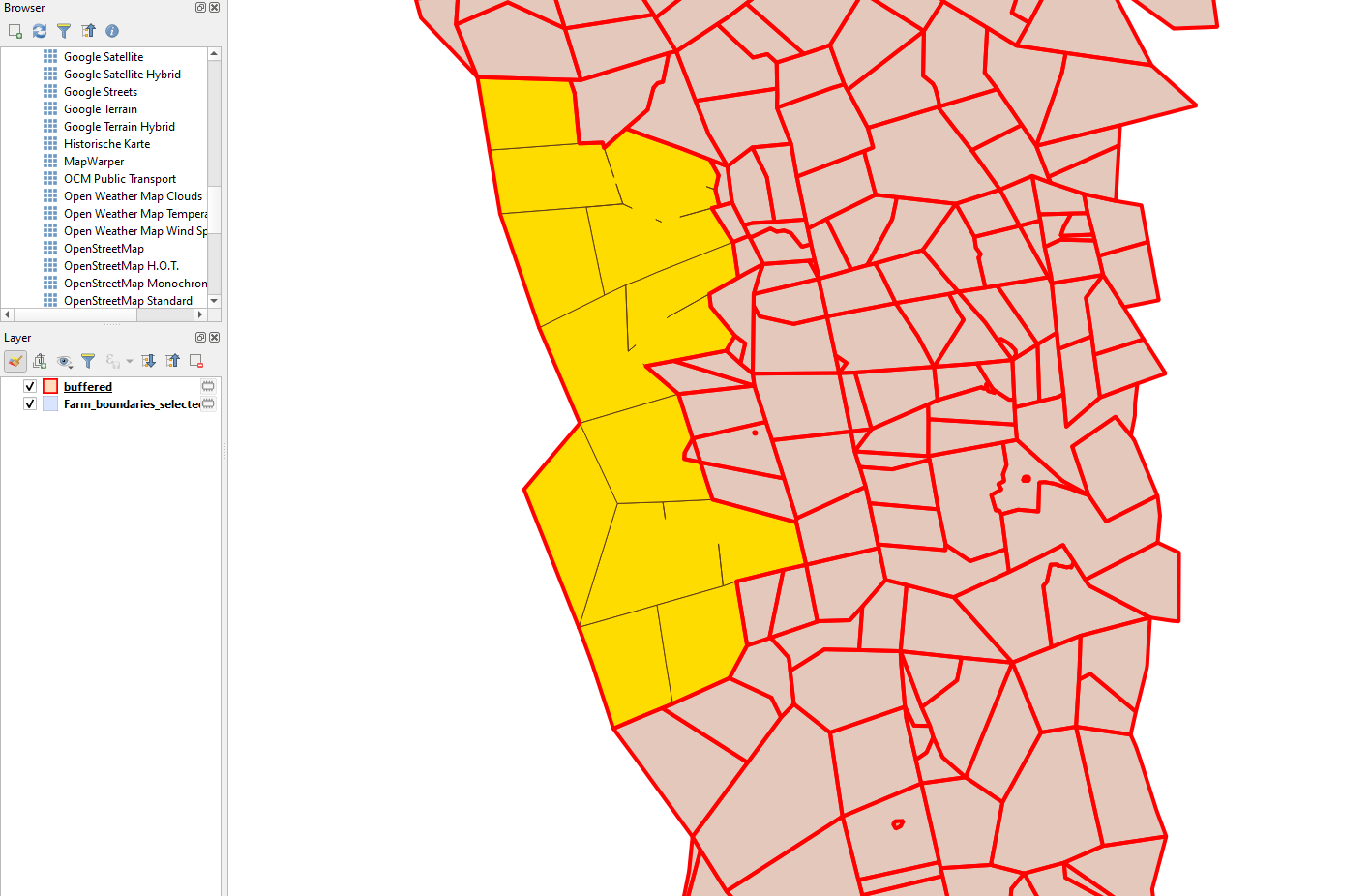 3
How to merge several google map images into one?
0
How to automatically convert line features into polygons using QGIS/PostGIS?
7
How to merge spatially separated polygons into one feature in QGIS?
3
Splitting area polygons into line segments in QGIS for using to edit OpenStreetMap
1
From several polygons of one layer to one polygon
3
Eliminate selected polygons in QGIS not working properly
4
Calculating dominant angle of a polygon in QGIS without main_angle function
1
Performing gap analysis with line and polygon layer in QGIS
2
Problems with cleaning the topology of a shapefile using GRASS tools and snapping tools