Test if a feature is visible in QGIS expression?

I'd like to test whether a given feature is displayed, i.e. visible on the map canvas, inside a QGIS expression. Any way to do this?

I'm essentially looking for an analog to the is_selected() function, which tests whether a feature has been selected, but querying whether it's displayed or not. For my use case, I'm more concerned about whether it meets the user's current filtering criteria in the layer tree (e.g. which categories are set to display in the categorized renderer) than whether it is within the displayed canvas extent, but I could live with both. I don't see such an analog in the list of functions in the QGIS documentation, however.

As further context, I'm building an expression that aggregates across points inside polygons. Simplified version is

which adds up the number of yeti observed at all sites that within the zone defined by the current (polygon) feature. See below, where it's assumed this expression is used in the labels for the zone polygons. 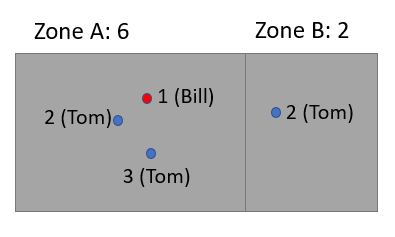 However, the YetiSites layer also has an attribute Observer, and in the layer tree users can choose which observers' sightings they want to see on the map. If the display settings exclude, say, Bill's observations, I want my sum to exclude them too. So I'd like to be able to write something like

but I'm trying to find how to code the (ficticious) is_displayed(...) part. Without this clause, I get the following, with 6 rather than the desired 5 shown for Zone A since the aggregation picks up Bill's point even though it is not being displayed. 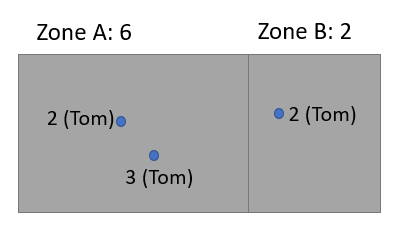 I can of course emulate this by running a processing algorithm, or defining the display filter upstream and then using it both when displaying YetiSites and in my aggregation expression. But I'd love to just be responsive to what the user is selecting in the layer tree to display.

To check if a feature is actually rendered, you can implement parts of this answer: https://gis.stackexchange.com/a/350958/107424 as a custom function:

and use it as is_visible(@layer_name). It returns 1 if the feature is visible (checked in the layer tree) and 0 if not.

If you also want to check if a feature is in the current map canvas extent, and therefore visible or not, you can add something like:

Not the answer you're looking for? Browse other questions tagged qgis expression or ask your own question.

5
referencing to features geometry in an expression
3
Referring to the parent layer with aggregate functions in QGIS
2
Batch intersection of points with line
6
QGIS - QField - Retrieve target field value when source feature intersects target feature in target layer
4
Expression to show specific attribute of feature within (aggregate?)
6
QGIS - Expression to aggregate values from an array