Is it possible to figure out the projection used in a map?

I have the map below whose projection is unknown to me. It's a PNG image without metadata. 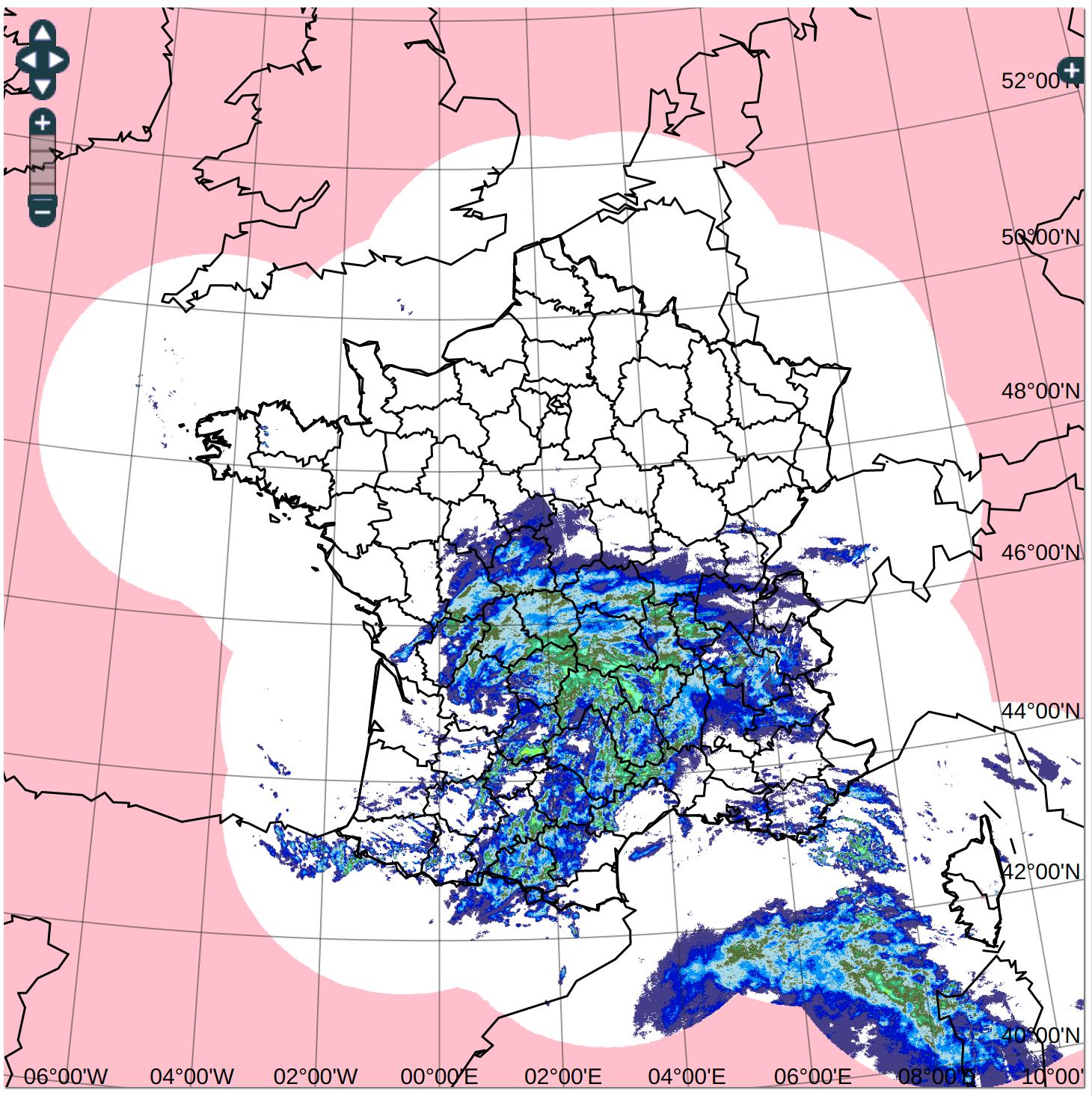 It comes from a webpage that shows radar information for France.

How can I figure out the projection it implements? I clarify that I don't require a perfect fit, something reasonably close would be fine, and I'm open to accept certain level of brute force. But I'd like to gather some ideas to make a sensible search.

It seems to be some sort of Lambert Conic, that's all I can tell 'by eye'. I have been using trial and error with QGIS, but the process of "define a projection -> set it -> try to fit the map as overlay -> discard it" is slow and I have little intuition to know which parameters to tweak and in which direction.

If you analize the website with your favourites browsers inspector, you will find a carto.js file at https://donneespubliques.meteofrance.fr/template/js/carto.js where you can see they are using Openlayers for this with the following projection:

Thats how it looks in QGIS as user defined projection: 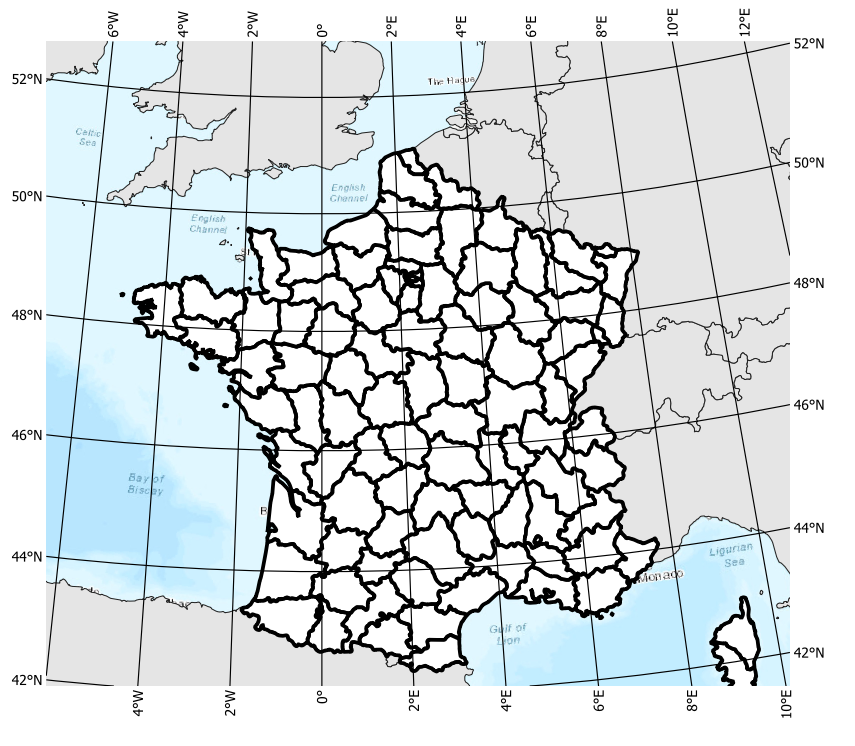 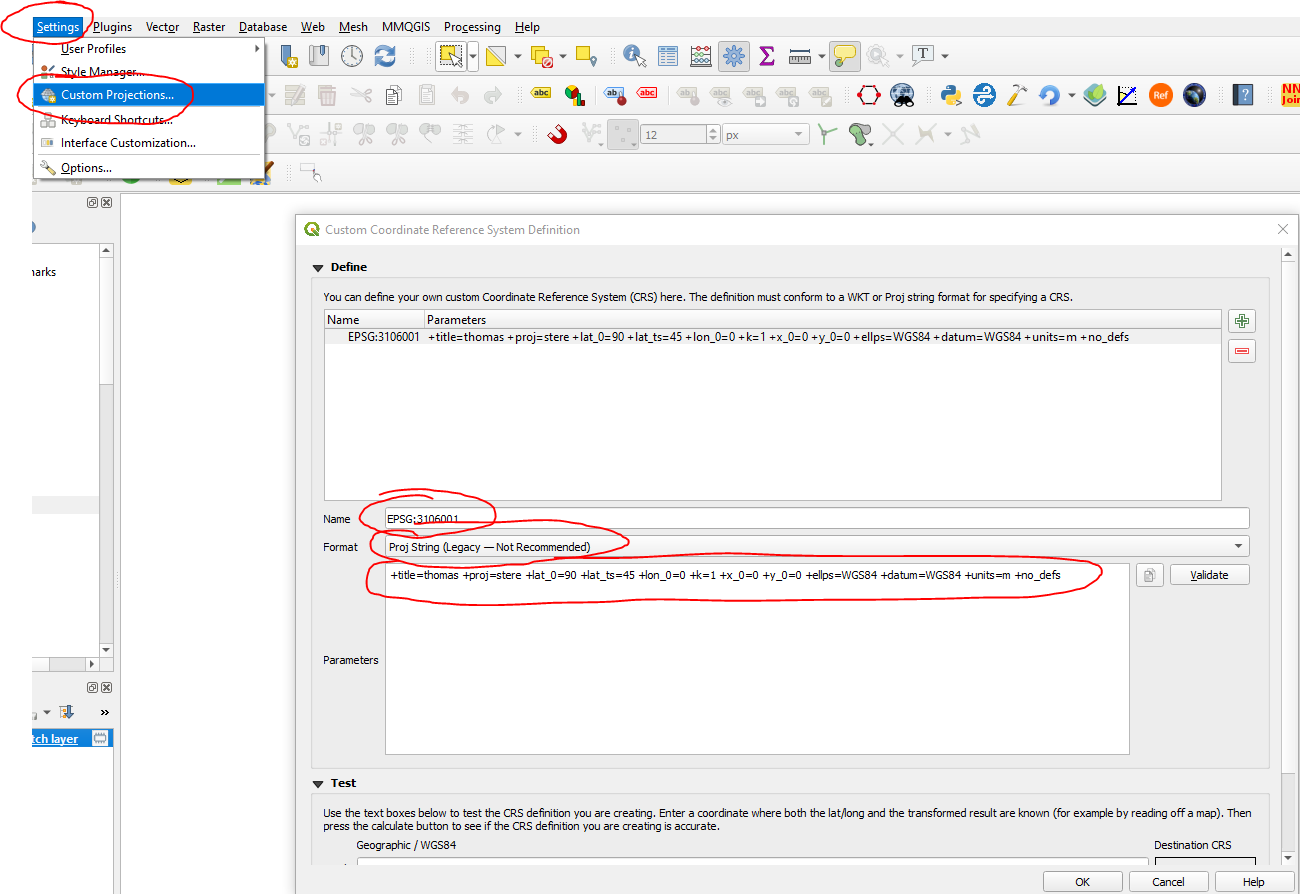 I'm interpreting your question that you have this saved image as a picture (raster), with no world file or other georeferencing information. And you say approximate is OK.

In this case, especially given the grid is shown, you could use QGIS' Raster > Georeferencer feature to force-stretch it to a desired projection rather than to try to guess/determine the projection. (Editing to add: though others' suggestions how to try to sleuth it out are good ones; if you can do so easily that's great. This is if you can't.)

A. The more your project CRS is different from the unknown image's actual CRS, the more imprecision there will be in between the grid points. Conversely, if you're pretty darned close (in the same family), you might be able to get away with only 4 points and using Projective rather than Thin Plate Spline as the transformation type.

B. This georeferences this one image only. However, if you have other images (e.g. from scraping a web site over time, since this seems to be some radar/weather map) which have the exact same (unknown) projection and extents, you can manually copy over the GCP points and world file you did for one image and use them for the others. Make sure that in your transformation settings, you keep Save GCP points on.

C. You can of course undisplay or even delete the utility layers of the orientation map and grid in steps 2 and 3 once you are done. You can even reproject your fitted image to a different project CRS on the fly, though image quality may suffer a bit when you do so.

It sounds as if you have the layer in QGIS. If I assume this right, you can just go to the properties of the layer (right or double click onto the layer) and go to the tab "information". There you have meta information about the layer at the top of the page such as Geometry, CRS (Coordinate Reference System) and Extent. If the projection is not written in the row of the CRS, you can easily define which projection your layer has with the given EPSG code (CRS: EPSG ****). If it is not already included in QGIS in your case, just go to epsg.io and search for your EPSG code and you will get plenty of information. Hope this helps and answers your question!

1
I have a .sid image but can't figure out the CRS
3
Is it possible to have another CRS in the status bar than used for the map?
4
Which projection is being used in this figure?
0
Map Projection - Why don't we draw things out
0
Determining the projection of map
4
How to figure out an unknown reprojection of a old (18 century) map (raster)?
2
Figure out which coordinate system being used
2
QGIS default projection used to render a WGS84 map