I am try to divide irregularly shaped polygons at specific points. I don't have any fields that inform the angle at which the polygons should be divided. Based on the Split polygon based on point feature at GeoNet, I am trying the Thiessen Polygons + Intersect approach, and it's almost working.

In the screenshot below, the orange is my "irregularly shaped polygon" and blue at the Thiessen Polygons created from the green points.

Below has a general sketch of my desired outcome, the gray polygons, just sketched in PowerPoint.

Is there a way to make the Thiessen Polygons more like the gray polygons than the blue polygons?

Ultimately I am interested in the interseciton of the orange polygons and gray polygons. 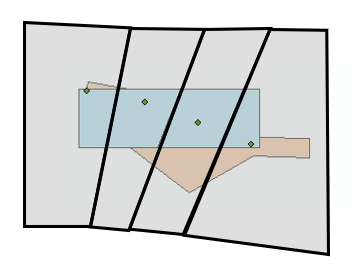 I am using ArcMap 10.7 with an Advanced level license.

The output extent is controlled by the arcpy.env.extent environment setting: https://pro.arcgis.com/en/pro-app/latest/tool-reference/environment-settings/output-extent.htm

Based on the comment/answer by @mikewatt, this is the code that works:

Not the answer you're looking for? Browse other questions tagged arcgis-desktop arcmap intersection voronoi-thiessen environment-variable or ask your own question.