I have 2m-resolution raster LiDAR data of a marsh edge from two moments in time and I am trying to calculate how much the marsh has "retreated" between the datasets.

I used the LiDAR data to draw vector lines where the marsh edge is, which you can see in my screenshot below. 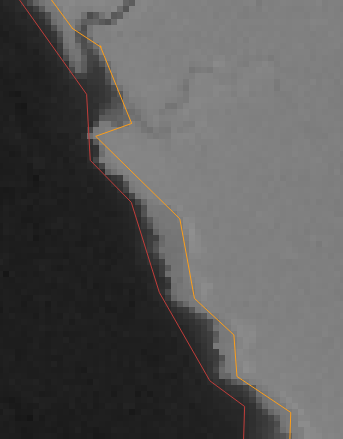 I have each vector line as a shapefile right now.

Euclidean Distance between two lines was close but was seeking the "closest" point rather than a perfect East-West distance.

Any advice on how to do this? Should I rasterize the vectors first? (was trying this but haven't gotten rasterize to work yet) Maybe there is an easy way in python?

Browse other questions tagged qgis-3 distance rasterization vectorization or ask your own question.