The samples are 256x256 pixels tiles, generated with gdal2tiles, with different -r options. 1_original.png is an extract (done with QGIS) from jp2 original image, for the same area than the tile.
The source CRS is well defined in source image metadata, so I don't use -s option on command line to specify it (I tried, but it doesn't change anything as expected).

Thanks to user30184, I got better results using gdalwarp before gdal2tiles: 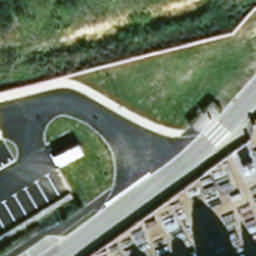 Remaining question: is there a need to use a second time -r average in gdal2tiles command, as resampling should have been done by gdalwarp?

Not the answer you're looking for? Browse other questions tagged gdal2tiles or ask your own question.