Given a set of coordinates, how can I calculate the minimum bounds?

I have a set of coordinates in lon/lat. There are always at least 3 ordered coordinates that form a poly (if they were projected flat). How can I calculate the minimum bounds for these coordinates as a set of valid longitude and latitude ranges? (by 'valid' I mean ranges that explicitly account for the antimeridian). Its kind of hard to explain what I'm looking for so I have a picture. 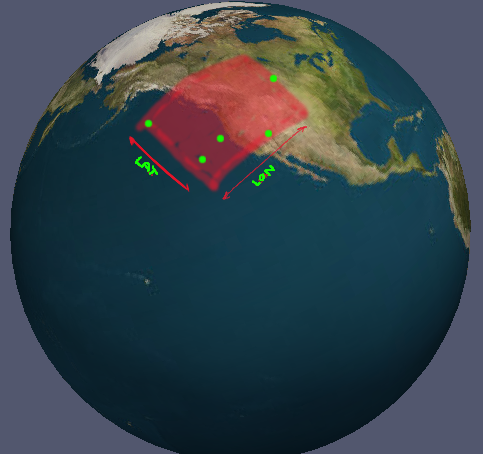 The case in the picture is trivial; you just find the absolute minimum and maximum for all the points. This doesn't work for all cases though. Is there a generic solution?

Some more clarification. The points form a polygon, so in certain cases, the required range could be from -180 to +180 (ie, the full 360 degrees):

The image on the left shows the longitude of four coordinates that occur on one 'half' of the Earth. Imagine it as if you were looking down onto the north pole (black dot). The pink shows the minimum longitudinal range that encompasses the polygon (the polygon is shown between the four points in purple). The case on the left would have two longitudinal ranges: [-180 to -120] and [135 to 180] (just visually estimating it)

The image on the right shows another case where the points go all the way around the Earth. This range would be [-180 to 180].

Hope i understand the question correctly...

We can solve the problem for longitude and latitude separately, so i will take your example with the longitudes: -76, -135 and 164.

First i would order them:

Now we can calculate the gaps between the coordinates:

The biggest gap (240) must be the boundary of the minimum bounding box, the part that does not belong to the box. The dotted line is the biggest part of the circle we can spare out. In our example that means, the boundary box starts with 164, includes -135 and ends with -76.

This is really easy to do in Javascript with the Google Maps API. Here is how you would do it client-side with that API:

I think I might have found a way to do this. My preliminary implementation works, but I'm not sure if there are any edge cases I've missed. If there's anything wrong with this solution, please point it out.

Given that I'm concerned with getting the lon/lat ranges for the polygon rather than just the points that comprise it, one way of attempting the problem is to actually 'walk' along the set of ordered coordinates from start to finish. You keep track of how far clockwise and counter-clockwise you've traveled relative to the center of the Earth given a starting point and keep going until you complete the polygon:

You can get a range of how far CW and CCW you travel from your starting point... this gives you enough information to derive correct bounds in the normal case (left in the image). In the case where the polygon goes fully around or cuts across the center, the returned angle of travel will be 360 degrees.

If the polygon cuts across the center (imagine two adjacent points at +90 and -90), I consider this to be a full sweep (360 degrees) though you could go either way.

Not the answer you're looking for? Browse other questions tagged coordinates or ask your own question.

1
Filtering out of bounds' coordinates
3
Problem points into a shape polygon
1
Generate coordinates with Minimum/Maximum distance from given coordinates
0
Seeking ArcGIS Pro tool to get min and max latitude and longitude coordinates?