I've been reading the ArcGIS help files on route analysis to gather more information on what attributes are stored with Stops. Maybe I've stared at the screen too long, but I cannot seem to understand the concept below.

When I Load Locations into the Stops layer, the default value in RouteName is null, as expected. I do not understand what is meant by the second sentence:

By using this property, stops within one route analysis layer can be assigned to multiple routes.

How is this done, if RouteName can only contain one route's name?

I tried to understand the theory by using an example. Two buses BusA and BusB travel in different sections of town, on completely different routes. The only bus stop they both stop at is Stop4, so if someone was on BusA and needed to change routes, they could only get onto BusB at Stop4. When the network dataset was set up, the two bus lines were assigned separate connectivity groups, while the bus stops was assigned to both.

When using the Route solver for this scenario, how is Stop4 assigned a route name, since it is common to both bus lines? Will it only be assigned the route name of one of the buses, but not both?

What is meant by

By using this property, stops within one route analysis layer can be assigned to multiple routes.

is that you can specify to which route your stops will be assigned. So, say you have two cars and multiple delivery stops. By specifying a route name, you specify what car (route) will serve this point.

So the phrase above say you are able to allocate the stops to a certain route thus creating multiple routes within one Route network analysis layer (the group layer created from Network Analyst > New Route). I understand your confusion, because it sounds as you can allocate the same stop to be assigned to several routes (and yes, you are right - in RouteName field there is place only one for one route).

I usually handle the scenarios you've describe by duplicating stop points in several routes. So, I would just copy/paste the same stop point (so the duplicate will have exactly the same geometry) and then assign it to a different route name. I hope that this is applicable even in your business case. 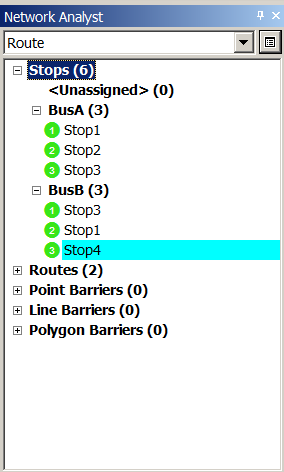 Not the answer you're looking for? Browse other questions tagged arcgis-desktop network-analyst routing or ask your own question.

2
Multimodal route analysis not yielding correct results
2
Finding distance between multiple points along a line
2
How to select “incidents” in network analysis based on their routes?