I have an existing vector shapefile with all the counties in the United States (called counties.shp) I also have a dataset that contains many species-county presence data points (species.csv) which looks something like this:

I'd like to create a new polygon for each species that includes all of the counties that they are paired with in the species.csv file. Each row is a unique species-county combination, so both counties and species are repeated throughout that file, yet I'd like to get a single polygon file for each species. There are several thousand species, so I'd like to have a way to do this all at once and compile the resulting polygons in a relatively neat way so I can easily use them for zonal statistics.

I'm imagining this is a somewhat simple task, but I'm completely new to GIS in R. 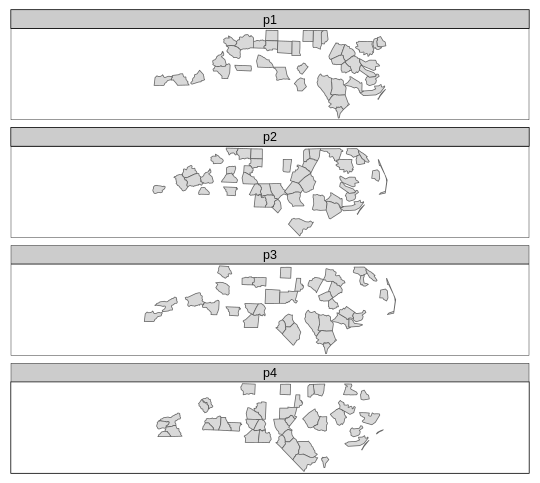 0
Finding distance between neighboring points in ArcGIS Desktop?
2
Classifying neighbors AND neighbors of neighbors using ArcGIS Desktop?
1
how do I join spatially polygons to polygons, creating new rows as required?
2
R- Polygons overlapping Polygons
1
Creating duplicate records based on overlapping polygons
4
How do I calculate the Terrain Ruggedness Index for each county in the United States in R?
2
Merging attributes into shapefile (US County-level data) using R
0
Using R to sum raster pixels of specific values