I imported data from a map extracted from OpenStreetMap. With osm2pgrouting I imported it into PostgreSQL, to be worked with pgRouting and PostGIS. Command used:

He created the following table structure: 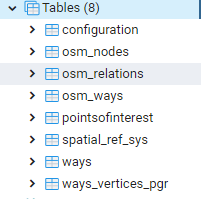 I am using the pgr_dijkstra function to calculate a minimum cost route between two locations:

It is working perfectly when I use directed: = false. But when I put directed: = true pgRouting is returning the same result. This is wrong because even with directed: = true he is considering my unidirectional streets as bidirectional. The image below represents some return lines from my query:

oneway = YES and one_way = 1 is a one-way street that the function should not be returning. oneway = UNKNOWN and one_way = 0 is my two-way street. The image below shows this one-way street that is being considered as a route path, which is wrong, is in the opposite direction of traffic. In the drawing it can be a bit confusing, but the street "Florestano de Macedo" is unidirectional, as shown by the return in the database. The figure is a bit confused because it is a street that passes next to a highway, and on the other side of the highway there is another street. But this problem occurs for any route with directed: = true. 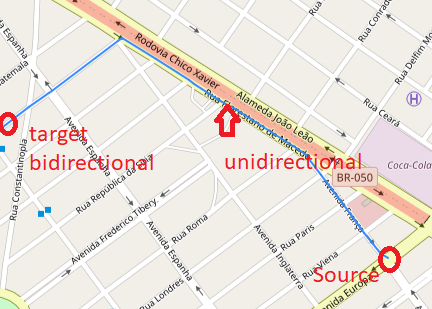 What am I doing wrong? Do I have to prepare/change my data in any way for these cases? Is my query wrong? PgRouting workshops only say to use directed as true or false, they do not mention data preparation for this.

You are passing in the metric length ST_Length(geom::GEOGRAPHY) of each edge E as both cost & reverse_cost - rendering it equal to to the undirected counterpart.

pgRouting realizes ordered graph restrictions via the [reverse_]cost parameters; generally speaking, while an undirected graph considers only a single cost per edge E, a directed graph treats each individual edge E as a pair of directed edges (E'[E_from, E_to] & E''[E_to, E_from]), each having it's own cost (cost -> E' & reverse_cost -> E'').

To implement one_way restrictions, set the equivalent cost parameter to -1 (-> excluded from graph); it is common (but not guaranteed) in OSM data to model one_way roads as restricted in [E_to, E_from] direction, so you'd need to set the reverse_cost accordingly:

Not the answer you're looking for? Browse other questions tagged postgis postgresql pgrouting routing osm2pgrouting or ask your own question.