How to serve a GeoJSON file through WMS with MapServer?

Could you please provide a working example of WMS mapfile with GeoJSON layer for the MapServer?

Mine is not working:

The error message is:

geojson mapserver mapfile
Share
Improve this question
edited May 3, 2021 at 15:37

@david-osipyan I used your question as the excuse needed to create new documentation for GeoJSON access in MapServer, with a new page visible now at: https://mapserver.org/input/vector/geojson.html

I hope that helps the next person coming along, in the MapServer community :)

By the way, it was so nice to read here in an earlier comment from you that MS4W is working great for you for GeoJSON access. Excellent! (it's nice to hear complements for once online, ha) I spend a lot of effort (through my company, GatewayGeo) to create/distribute/pay for all the downloads of MS4W. I'm glad to hear it helps your organization.

PS. as you notice at the bottom of that new page, it mentions that all MS4W installations include a default mapfile (in /ms4w/apps/local-demo/local.map) that includes GeoJSON output, out-of-the-box.

Have a nice weekend,

Your mapfile is mostly OK. I used the states.shp shapefile from the GeoServer demo data in my test and converted it into GeoJSON with ogr2ogr

I checked with ogrinfo that my geoJson.json file contains a layer named "states" and used that in my mapfile. Other edits that I did are

Because you used the relative path I created also a subdirectory "shp" under the directory where the mapfile is located and plased the GeoJSON file there. Myself I prefer to use absolute paths but relative paths are OK as well.

I used this query on my browser for testing

The result is this 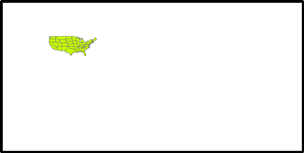 I suppose that your GeoJSON file is not in the correct directory that is relational to the mapfile location, of the layer of the GeoJSON is not "OGRGeoJSON".

Your mapfile is very minimal but it does work even without CLASS and STYLE. You just won't see anything on the map because nothing is rendered. For next tests I suggest to use the mapfile from the WMS Server manual page as a template. It is still short but contains useful examples about how to configure projections and basic styles and all that is needed for setting up a WMS service.

Not the answer you're looking for? Browse other questions tagged geojson mapserver mapfile or ask your own question.