I then tried to do a spatial join for the census block points that intersect with the service area layer, but for whatever reason, only the value of only a single point is being carried over, instead of all the points.

I selected the single point that had its data joined with the service area polygon.

Does anyone have an idea what went wrong? 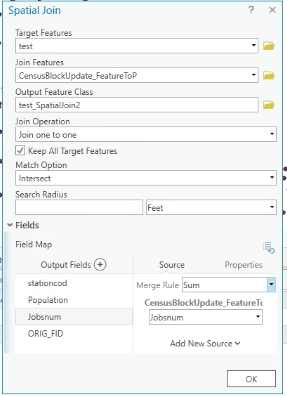 arcgis-pro spatial-join intersect
Share
Improve this question
edited May 19, 2021 at 2:58

Here's the problem: multiple census point blocks lie inside a service area, but spatial joins can only merge one point feature's attribute into the polygon.

Not the answer you're looking for? Browse other questions tagged arcgis-pro spatial-join intersect or ask your own question.

2
Simple Spatial Join of Point Feature to Polygon Target Feature Not So Simple (Source Files Included)
0
Summing number of intersections with separate buffer layer using QGIS?
2
Spatial join Polygons by their centroid in ArcGIS
0
Using for loop and spatial join in ArcPy?
0
Counting Block Group Populations in buffers using ArcGIS Pro?
2
Spatial join in R - Adding points to polygons with multiple corresponding points
1
Summing data from a smaller boundary shapefile to a larger boundary shapefile if the boundaries do not align in ArcGIS Pro?
3
Removing one to many links when performing spatial join in GeoPandas
2
Weighted mean in attribute union with QGIS
1
Creating a Multi-Step Spatial Join Tool Script (One point file to many polygons) with one point output