I have many polylines that represent the GPS derived route of a vehicle. I have created a layer with all route segments that meet a certain wind speed threshold (not all of these line segments touch), and have made an additional field with segment grouping values that I want to dissolve segments on (segments share group values based on the time they were generated). Unfortunately, when I dissolve segments together based on group value, the new polylines don't maintain the vertex order I need, as seen below:

Note the end vertex is on one of the middle lines; however, the vehicle was travelling West, so I need it to be on the far left segment. It seems that dissolve randomly chooses start/end line segments when creating the new vertex order. (Note, all original segments have correct vertex orders. I.e. for this image, each segment vertex ends on the Western vertex.)

I need to figure out if there is any way to control the vertex order of a dissolved polyline?

I have a time associated with each line segment that I can use to order them properly, I just am not sure how to apply this in dissolve. Context: I need a proper vertex order so that I can generate segment angle changes along the route.

Here is a link to some sample data (pre-dissolve). If you dissolve these segments by the "segment_group" field you will see the issue. https://github.com/Austin-Willoughby/Projects/blob/master/example_segments.zip

I've updated the sample data to include more segment group types. I've also written some code that utilizes the Array method @Hornbydd suggested and generated the segments seen below. 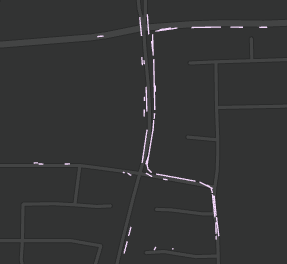 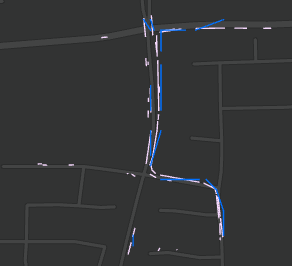 The newly generated lines seem to have the desired vertex order; however, the vertex coordinates seem to be off slightly. Additionally, the standalone segments (i.e. segment_group = 0 which shouldn't be combined with other lines) don't appear in the new lines. Perhaps the issue is that I try to create polylines from these single segments in the same manor as the multipart lines?

Shorter version of your script, with specified projection:

Note: tested on shapefile you provided.

I've looked at your sample and able to replicate the issue. I also tried the pairwise dissolve tool and weirdly it produce a different sequence. The problem can also be replicated in ArcMap.

I'm unsure why its happening so the only thing I can suggest is you use python and arcpy to build your multipart line. You can append each part to an Array object to construct the multipart.