I have the basic process working in ArcGIS Pro 2.2.0 as a tool that I can run from inside ModelBuilder. The tool contains two input tables that use inline substitution to get the path from a variable that contains the input geodatabase path. The tool then makes Table Views from both Tables, performs the join and exports as .dbf table to a separate input folder (see image). This all works well for that one input geodatabase.

I recognize that the Output Geodatabase from Iterate Workspaces has the 'dataset' symbology in ModelBuilder (green ellipse) whereas the geodatabase name that I currently provide as an input to the working part of the tool has the 'variable' symbology (blue ellipse). I wonder whether that difference is part of the problem, but don't know how to fix that.

Are the table names exactly the same in all your input geodatabases? An iterator would allow you to step through a folder of geodatabases but your make table view tools are assuming that the table names are unchanging. Also how are you changing the final output table name? Currently it would simply overwrite the same dbase table unless you are using inline substitution. Such questions are best accompanied with examples of your input data as currently it is not at all clear what you have.

I'm going to assume you have this scenario: 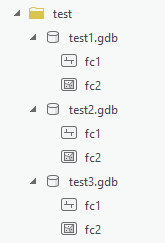 The model that would join these datasets and export them to dBase format is:

The input fc1 into make table view tool would be: %Workspace%\fc1

On each iteration the workspace must be defined first as it is a precondition to the make table view tools, because of that the inline substitution %Workspace% will work

Not the answer you're looking for? Browse other questions tagged arcgis-desktop modelbuilder arcgis-pro file-geodatabase or ask your own question.