I am trying to extract Landsat values at a number of points using Google Earth Engine (Python API). My points are given to me in the NAD83 system (as a CSV dataframe).

How can I extract a 3x3 grid of pixels (9 sets of spectral values) centered at the point from Landsat instead of just a single (30mx30m) pixel at the lat-lon point, while also enforcing the specific coordinate system (NAD83)? In other words, get all 30mx30m Landsat pixels within a 90mx90m area around my point?

Here is my code:

Yes, you must set this to correctly interpret the coordinates.

This is the only coordinate system that matters when retrieving point values; the crs in reduceRegion is irrelevant because the feature has no area — except for your next question.

How can I extract a 3x3 grid of pixels (9 sets of spectral values) centered at the point from Landsat instead of just a single (30mx30m) pixel at the lat-lon point?

One way to do this is to preprocess the image with neighborhoodToArray:

Now each image pixel is a 2D array of the 3×3 group of values you want. However, the 3x3 area is computed over the output pixel grid, not the original image's, which means the CRS used by reduceRegion is now relevant. This CRS should not be the one of the point, but the one of the grid you want pixels from.

You can't just say “the pixels of the original image” because you're taking the median of a collection, and each image in the collection may have a different projection — even when they're from the same satellite, each orbit is slightly different. A useful approximation is to use the projection of some one of the images you're taking the median of. Or you can just choose a scale, but 3x3 patches are more likely to be sampled poorly if they don't match the image.

So, here's a working example (in JavaScript so it can be run in the EE Code Editor):

This example using your point will show the point and pixels like this: 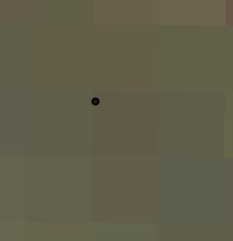 and the middle entry of these 3×3 nested lists (the downloaded form of arrays) give the same numbers.

There's one more thing you should do. You mention wanting several points; for this purpose, you should use reduceRegions instead of reduceRegion. The difference is that reduceRegions takes a FeatureCollection which can contain many points; this will be more efficient than calling reduceRegion for each point, because Earth Engine can query the image collection for images that intersect any of the points, rather than a separate query for each point.