I took a very good course on QGIS from Udemy (GIS in QGIS 3 for beginners) and made a pretty complex map with it. A month or so afterwards, I made a pretty simple map without any problems using a rule-based style. Five months or so have passed so I'm a bit rusty, but I'm trying to make a map with a rule-based style and for no reason I can understand, the points won't show up. I'm able to make a graduated size based style with the size based on an attribute (numbers) in my .csv file that I used to make a delimited text layer:

But then when I try to create a rule-based style based on another attribute (there are five different words in one column of the .csv that describe categories and I want each category to have a different color, and I want the size to be graduated just like in the screenshot above), no points at all appear. This is from the same .csv file so I have no idea what is going wrong. First, what I found strange was that the 'Count' and 'Duplicate count' show up as zero, even though the filters appear to work. 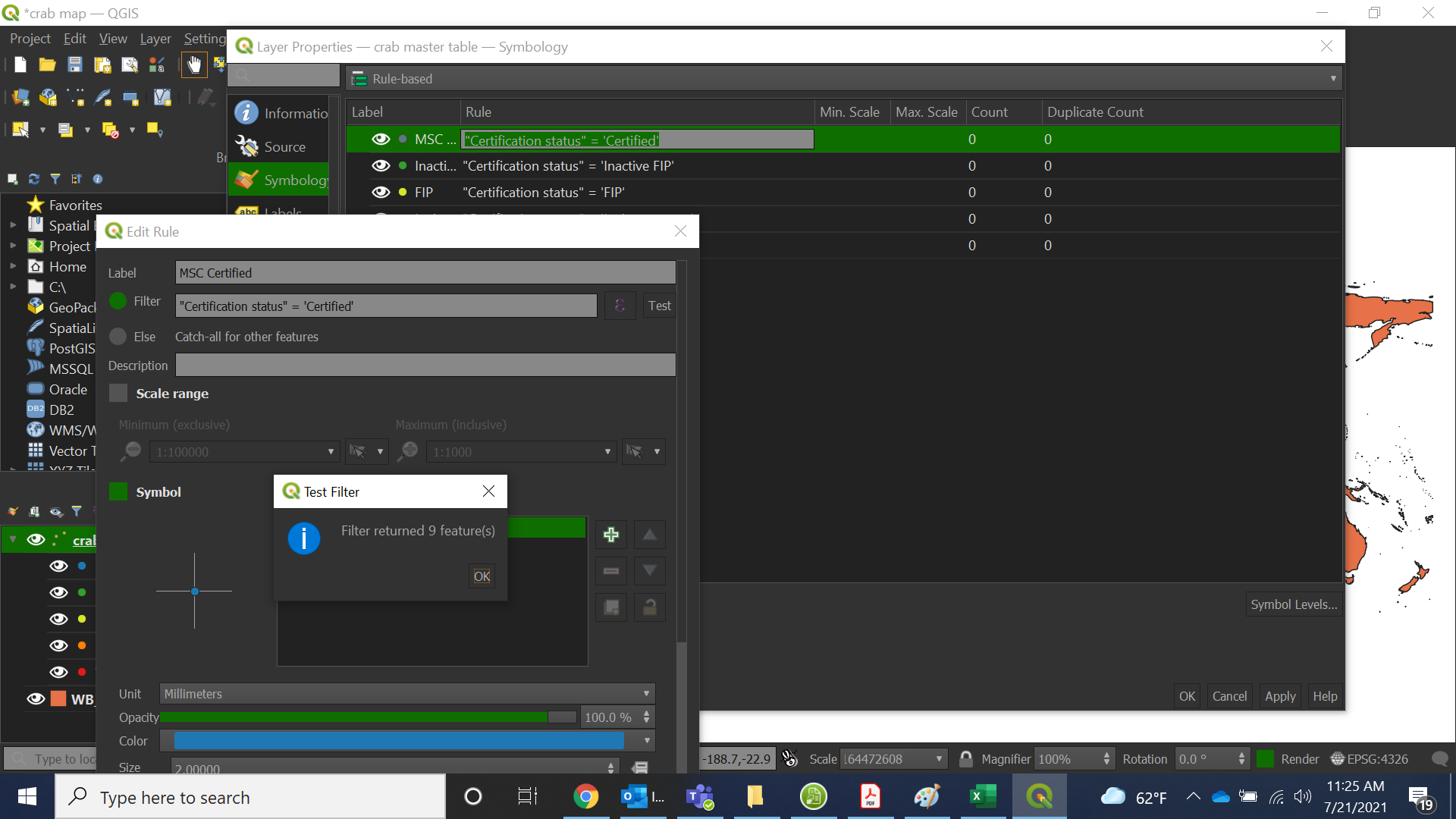 Now you can see (I've hid the countries map layer) that none of the points appear at all. 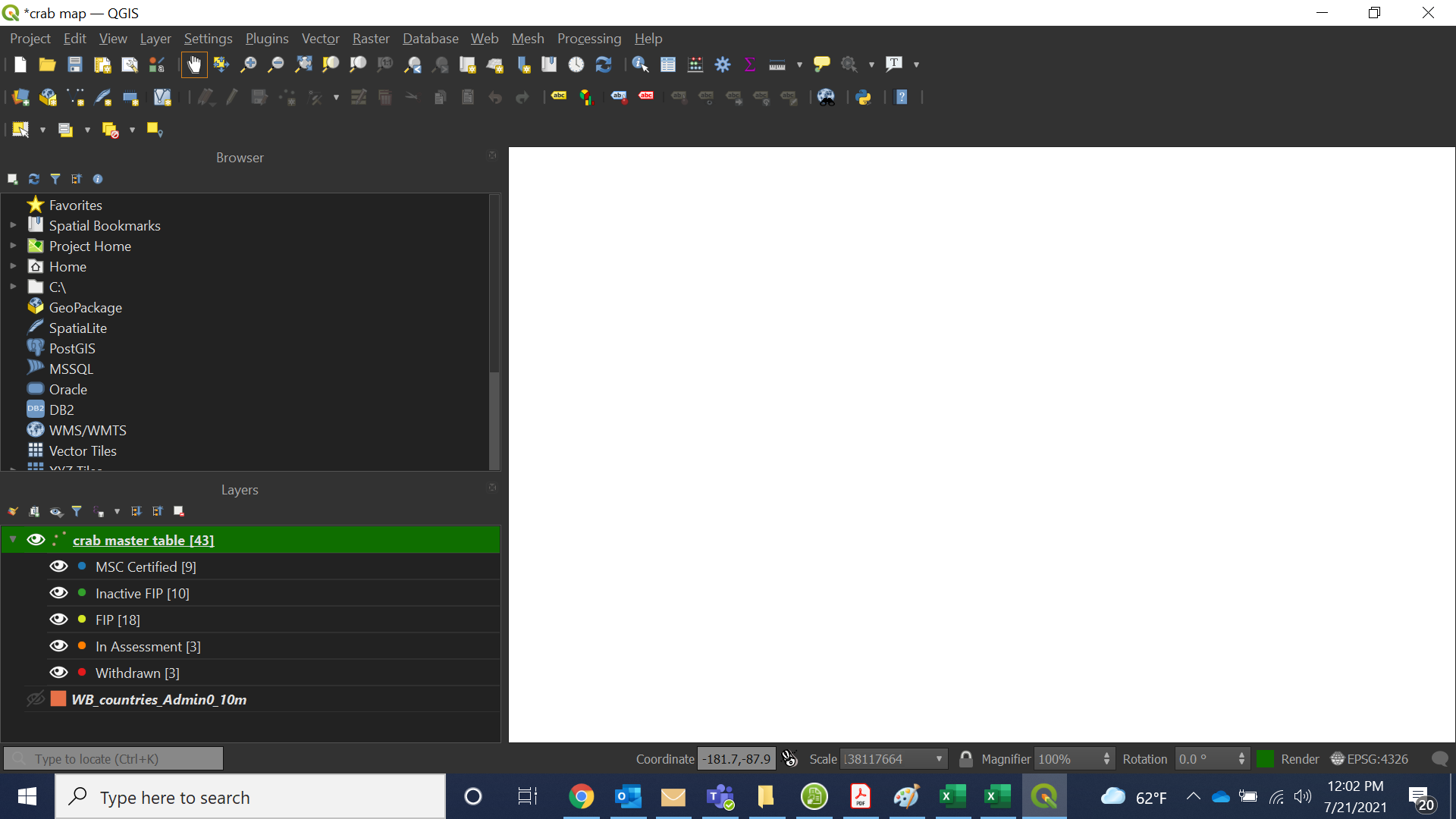 I created the same exact type of rule-based style (different colors for different rules) in my previous map without any problems, and I opened it up and compared it and couldn't find any differences. Please help, it's an important assignment for work and I don't know anyone that can help me.

At request of commenters, here is the attribute table. Based off of what another poster said, I also created another .csv with only the necessary columns (fishery name, certification status, total volume, latitude, and longitude), but still ran into the same problem, so it's not that there are too many columns or blanks or anything like that. 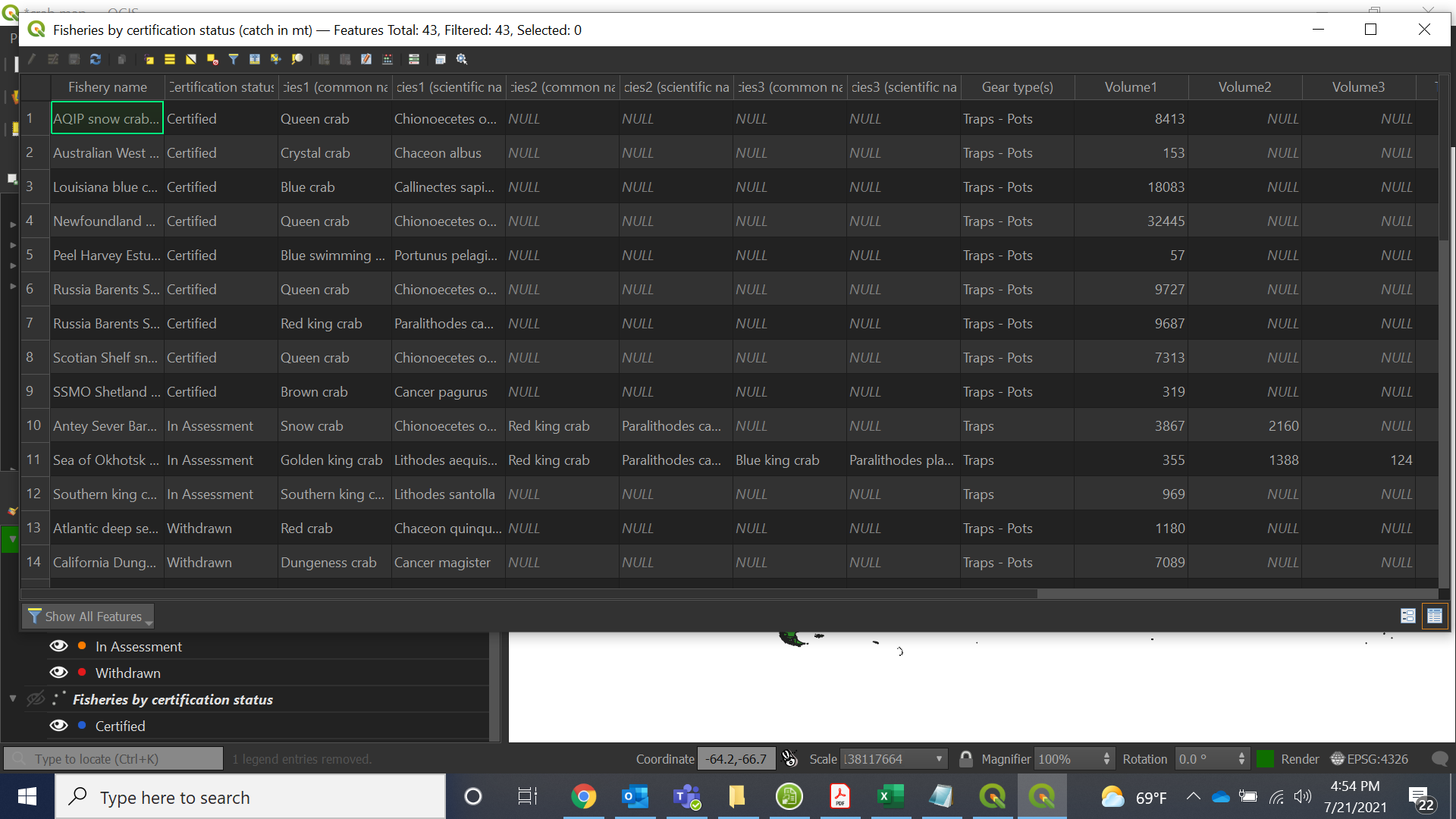 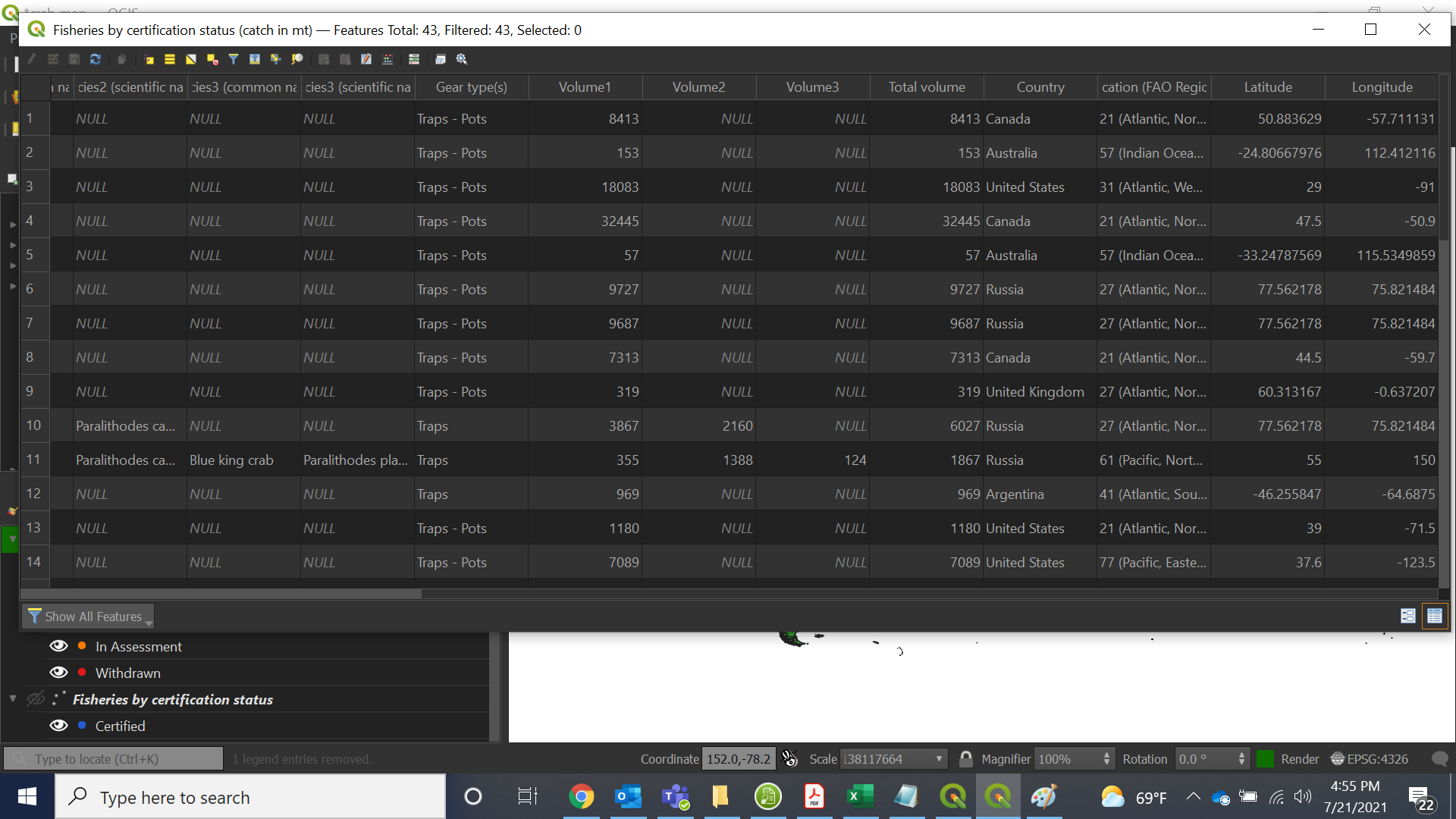 Edit: OK NOW I solved the problem by just using the gradient style (based on size) and then converting that into a rule-based style (when I tried the same for categorization style, it didn't work). From that rule-based style, I clicked 'Refine selected rules' and then clicked on 'Add categories to rule' and manually created the color scheme for each size-based rule. Unfortunately, in a few places, two points were created in the same place, one of which is the default blue color and the largest possible size, the other of which is the custom color, and always the same size (2.0, as it says when I edit that color categorization underneath the rule). In many places though, the blue big-sized dot does not appear, because it is smaller than 2.0. How can I fix this?? I can't turn it in until it's perfect.

Edit again: duh, I needed to go in and change the size of each one of the markers nested within the size rule so that it is the same size as the size-based rule's marker. But then they just all show up as that same dark blue. How do I make the color-based rule be processed first even though it is nested within the size-based rule? Starting from categorization rather than gradient would have been much easier, too bad that didn't work!

Edit again: FINISHED. Fixed that last issue by clicking on 'Symbol levels' and assigning the top size-based rule to 0 and the color-based rules to 1. 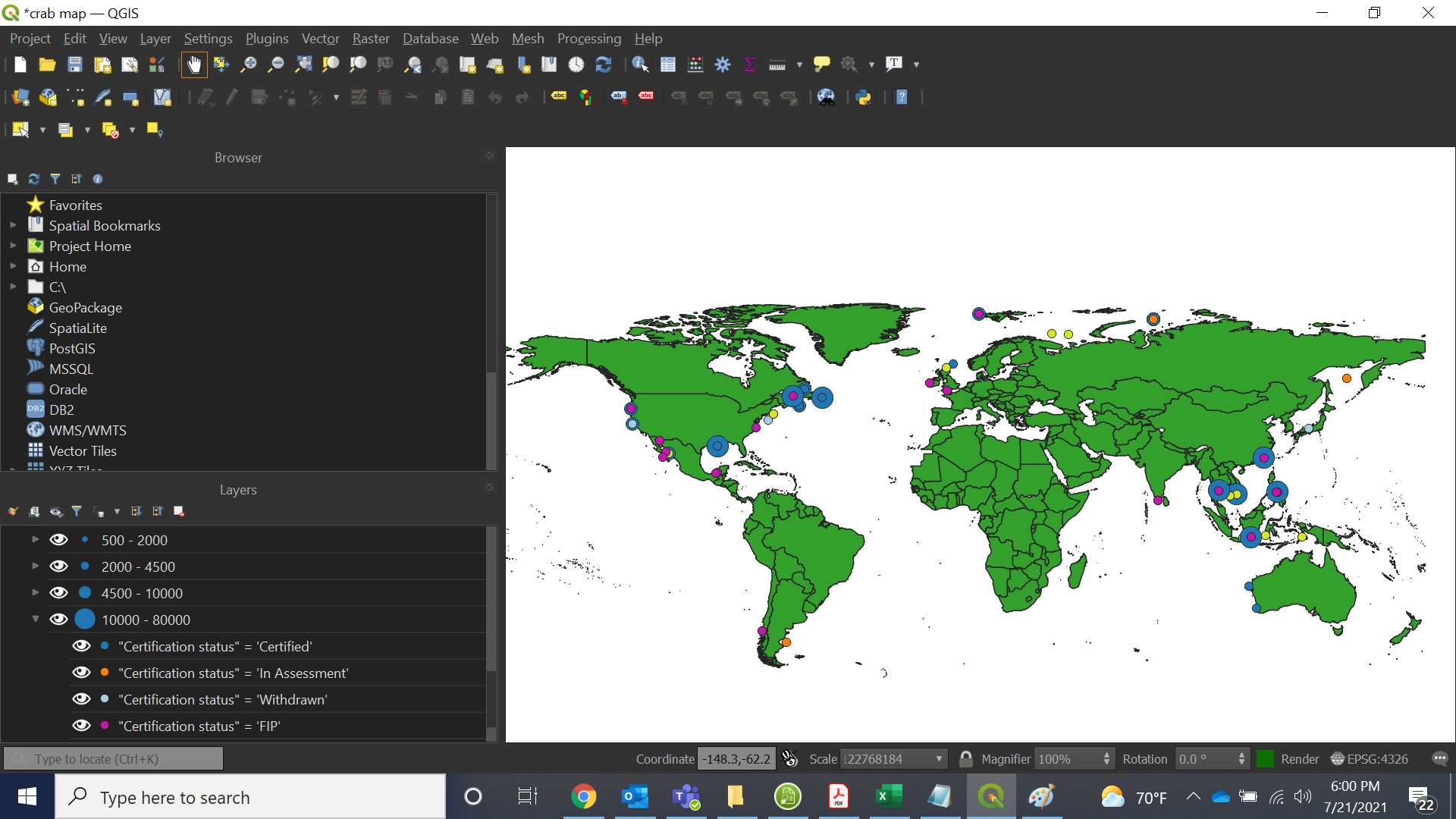 Perhaps create a categorized style on the field you want and then change the style to rule based. Then the concrete rules will appear in the settings formular. What i further came across is that there should not be an empty column in csv, somehow i had cases where the colums not matched the entries below.

I had the same issue of disappearing points, but I fixed it by creating a new column in the attribute table. I think this worked because my column title was too long or because it had characters /1, so the rule based categorizing tool could not find the information (and everything got the value "else").

Not the answer you're looking for? Browse other questions tagged qgis rule-based or ask your own question.

1
Reuse same style settings for chloropleth maps based on different datasets
2
How to change rule-based Layer Styles all at once in QGIS?
1
How to create a rule-based gradient using an expression
3
Create rule-based renderer from an existing renderer using PyQGIS
2
Rule based labeling in rule based styles
9
Visualizing layer using categorized AND graduated styles in QGIS?
2
QGIS raster rule-based coloring
3
Can qgis2web display rule-based layer style?
1
QGIS different scale levels in rule-based styling - in one rule