There are a number of stages required to get the required output, all of the tools are well documented in the arcgis online help and the page on stream ordering is very useful.

The first stage in any hydrology processing is to fill any pits in the DEM using the fill tool to ensure that water can flow over the surface without becoming 'stuck' in an erroneous hole in the DEM.

Once this filled DEM has been created the flow direction can be computed, which uses the elevation to work out which direction water in each cell will flow, using the D8 method, where all of the water is assumed to flow out into one of the 8 surrounding cells (This is a broad assumption but should be ok for your purposes).

The flow direction can then be used to create the flow accumulation, a measure of the number of cells which flow into each cell in the raster.

A conditional statement can then be used to generate a raster stream network from the flow accumulation. This statement will vary based on resolution and landscape form but it effectively needs to create a new raster with only cell who have a flow accumulation above a threshold value.

This raster stream network can then be assigned either Shreve or Strahler values using the stream order command. The easiest way to explain the difference between these two methods is using these images from the helpfiles: 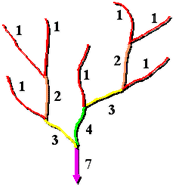 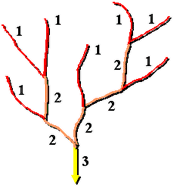 As you can see in Shreve ordering stream orders are added together so a 2 meeing a 3 becomes a 5 and in Strahler two 2's become a 3 and a 2 and a 3 remain a 3. Strahler is generally preferred as it generates a better hierarchical river network. Although I am sure some people would argue the opposite.

The final step is often to convert this stream ordered raster to a vector, which is simply performed using the stream to feature command.

If you have to do this a lot I would recommend making a python script to automate this or building a model, as it is a very repetitive process, which can be easily automated.