I have a polygon layer representing coastal cliffs and would like to create a line at a certain distance out to sea from this polygon layer (I drew a blue line on the image below to demonstrate).

In effect, this would mean buffering the polygon but only on one side of the polygon features, and as a line rather than a polygon like in the traditional Buffer tool in QGIS. I would then like to join the attributes from the features in the original polygon layer to the new "buffer line" layer.

Is there a tool in QGIS to achieve this? 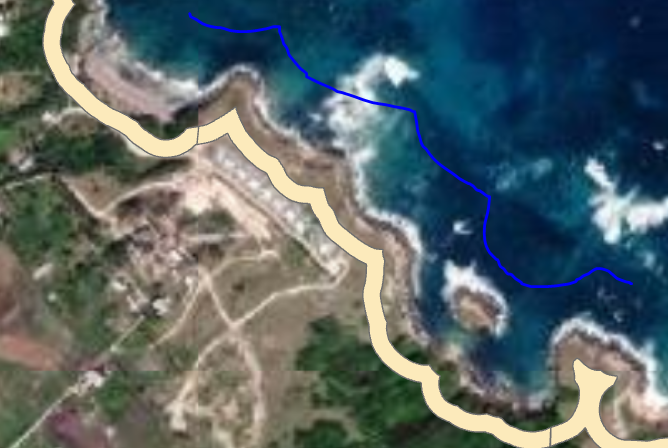 If you have a layer for the water body, you can use QGIS expressions with Geometry by expression to generate the lines by 1) creating the buffer, 2) taking only the boundary of the buffer, 3) retain only that part of the buffer-boundary that intersects with the water.

Use this expression and replace the value in line 2 (here: 3000) by the size of your buffer and water with the name of your waterbody-layer. The resulting layer will have all the attributes from the cliff-layer that you use as input:

Screenshot: cliffs (yellow) and waterbody (light blue) as well as dark blue lines, created with the expression from above (here with Geometry Generator for demonstration purpose, but you should use Geoemtry by expression as explained above. As you can see from the labels, the lines have the same attributes/values as the cliff: 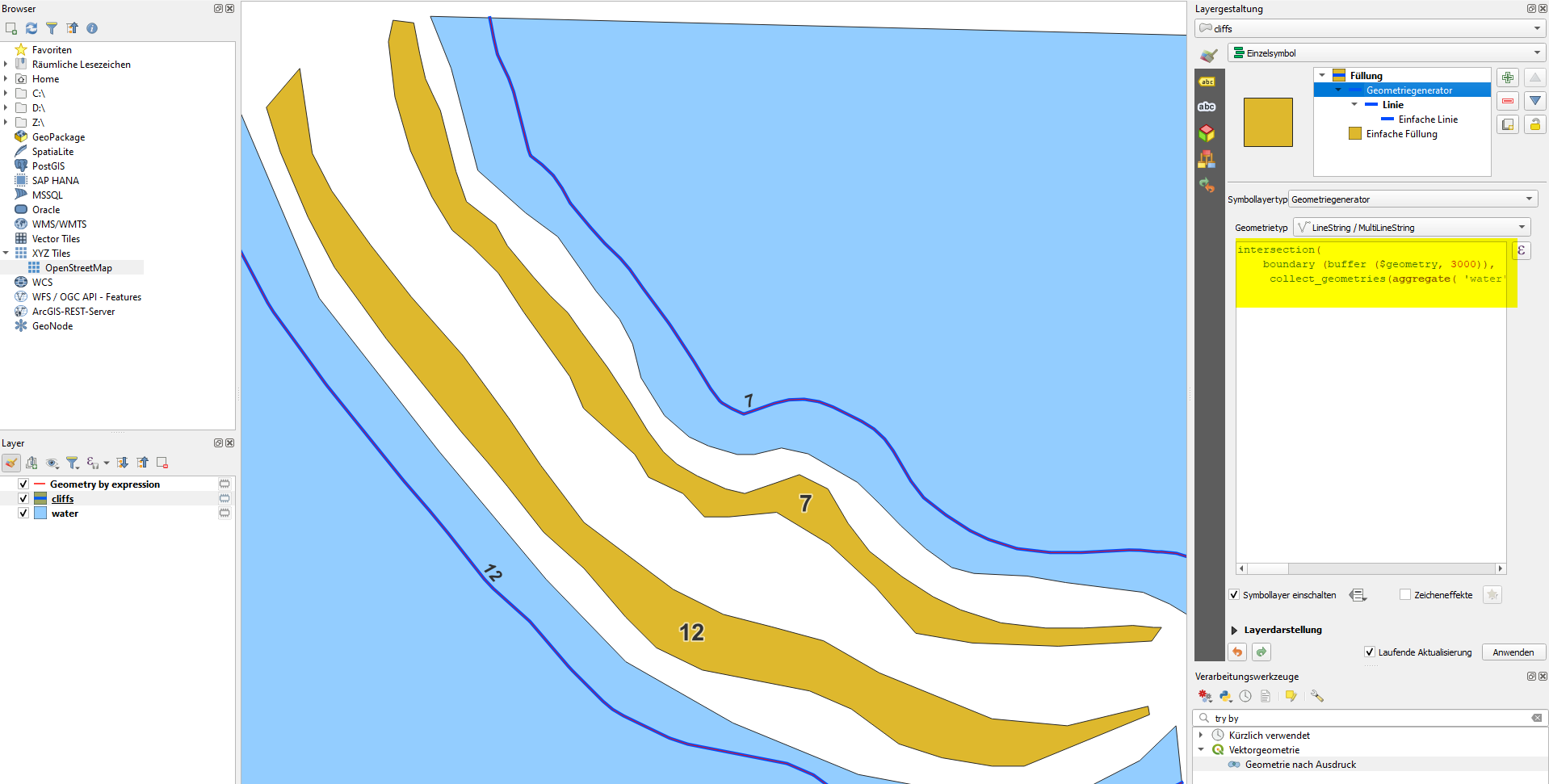 If you have several neighboring cliffs, the buffer and it's boundaries will overlap. To keep only the non-overlapping part and separate line-features, use this expression, based on the one above, but then clips the result: the lines that overlap a buffer around the cliff (slightly smaller than the initial buffer) are deleted. Set the buffer-size in the sencod last line (here: 99.9) to a value slightly smaller then the size in line 4 (here: 100):

Maybe not as smartest as the solution suggested by @Babel.

IMHO there is also a possibility to achieve the desired output with the following workflow:

Step 1. Creating the centerline of coastal cliffs. The solution can be found in Finding centrelines from polygons in QGIS? or Creating centerline of river in QGIS?

Step 2. Proceed with the "One side buffer"

Also, I recommend paying attention to this thread: Buffering only sides of polygons in QGIS?. However, most of the approaches will require using the "Polygons to lines" and the "Explode lines" geoalgorithms.

Not the answer you're looking for? Browse other questions tagged qgis vector buffer overlay polyline-creation or ask your own question.

4
Creating polygon buffer from line
10
Creating buffer based on polyline without line end caps and without dissolving the created polygons in QGIS?
4
Generating an irregular polygon buffer around a line in QGIS
5
Creating buffer in QGIS without including surface of original polygon?
3
Building single sided buffer around categorized polygon layer
3
QGIS buffer of lines results in "random" vertex order in buffer polygon