I have been looking and looking for a long while, but I was unable to find any freely available datasets for country borders with resolution higher than 1:1000000. I found this strange as I thought that such general data should be widely available as it is constantly present on maps and etc. The only data I could find was from OpenStreetMap, however, I am looking for a more "official" datasource. Could anyone probably direct me, or explain why such datasets do not exist?

Upd: I ask this just out of general curiosity, I do understand that I might not need such highres data. What I am talking about is if it would be possible to get some shp/geojson etc. vector data that would provide let's say a 100 meter accuracy The available datasets do not provide this kind of detailed accuracy, which is present for example in OSM or Google Maps I am curious as to why there is no available official worldwide datasets in the resolution of OSM or at least in a generalisation less than 1:1000000 or where I could find them if there are. 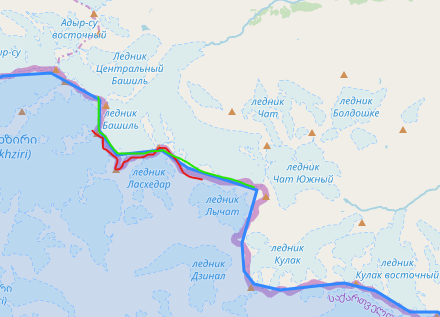 I think you should reevaluate your very concept of "official", high detailed source for all country borders worldwide. OpenStreetMap data comes close to a worldwide dataset with acceptable level of details for many use cases - however, in each case, this must be evaluated critically.

For a really "official" source, you would have to check 200 +/- official sources of all +/- 200 existing countries wordlwide. Borders are defined on a bilateral base. The actual delimitation takes place between two neighboring countries. For that reason, there cannot be an "official" registry of all worldwide borders, but at best +/- 200 "national" datasets. There is no international body (like UNO) registering the official definitions of all conturies, this is strictly a matter of bilateral agreements - and in many cases still of custom and practice (customary law) - at least for a precision of less then 100 meters and in more remote areas (deserts, swamps, forests, mountains, lakes etc.).

So every insititution that collects these data (like OSM) is not an official source any more by definition. If you really are to get official definitions, you can get them only at the national level.

Why it's difficult (if not impossible) to get a high precision, official dataset of worldwide borders

In many cases, not even that does help much. Neighboring countries often have diverging definitions of what belongs to them and what to their neighbors. Georgia and Russia will have different definitions on their borders - not to speak about Crimea or the dispute between Armenia and Azerbaijan (not just about Nagorno Karabakh, but also their "regular" border like in this area).

There are many other cases: the delimitation of the borders between Uzbekistan, Kyrgyzstan and Tajikistan in the Ferghana valley have been an issue for decades now. We not only speak about clear cases of contested territories, but also of generelly undisputed portions of the border that are not delimited: there are many unmarked segments of the border, thus no unanimously shared definition in the terrain (like boundary stone) does exist.

Only if both parts sign an agreement that fixes a border in all it's details (most often still based on real boundary stones put in the terrain by a bilateral commission) can we speak about an "official" border.

Many borders date back decades (or even centuries), but back then have not been defined very clearly (or there are contradictory sources from different periods so that it remains unclear which one should be considered the "correct" one).

Borders can date back centuries: see the curious case of a small town on the border of the Netherlands and Belgium with literally dozens of enclaves and exclaves on both side which goes back to medieval times and an agreement from 1843.

Other oddities, going back centuries, include condominiums like the Pheasant Island, which is part of Spain for the first half of each year and part of France for the second half of the year. Here as well, it's difficult to draw a 100% exactly border, as it changes over time.

There are not few cases of peaceful territorial exchanges on the local level ( a few hectares) that normally do not make headlines. These are often tiny adjustments of existing, but not clearly demarcated parts of the border or border segments that create some problems for the infrastructure, economy etc. Examples inclue a territorial exchange between Ukraine and Moldova or Uzbikistan and Kyrgyzstan or others including China. Also the hundreds of enclaves on the border between India and Bangladesh have resulted in border revisions.

As border zones tend to be a delicate issue for security concerns, many states ar not keen to publish official documentations about this delimitation. And a map in always all cases is a derivative product that documents one kind or another of border-definitions, but it is not the (legally binding) definition in itself - so to get the "official" source would meen going to the archives (if you have access) to access protocols on the delimitation and demarcation (like the ones of the Kyrgyz-Uzbek borders mentioned here).

And even today, not even such protocols exist. Many borders are not defined in such a precise way, but are still based on older principles like "in the middle of the river" - riverbeds change, however. There are sections of the border between Switzerland and Italy that are defined as "the ridge of a glacier". With climate change and melting glaciers, the border changes, too. As well, there is no agreed definition of the border between Switzerland and Germany in the Lake of Constance - as there is no need for it:

there is no legally binding agreement as to where the borders lie between the three countries. See: https://en.wikipedia.org/wiki/Lake_Constance#International_borders

Our boundaries can change: Borders are commonly regarded as fixes, but depending on the terrain they are subject to climatological changes and natural phenomena and may thus change their course.

So even in the middle of Europe with it's sophisticated administrative institutions, high precision cartographic technologies, need for clear definitions in a denseily populated area and centuries-long tradition of border delimitation, borders to this day sometimes are still not defined "on the meter". This is even more true for many parts of the world.

Critical evalution of the very concept of "official", detailed border

So I'm not sure if the very concept you're after does makes sense. With no dataset you'll get a guarantee that it is correct or generally accepted. The more "official" and detailed the data gets, the more you'll get an illusion of precision and accuracy that in fact does not exist.

Not the answer you're looking for? Browse other questions tagged data gis-principle boundaries or ask your own question.

1
Where can I find historical political affiliation data for the United States?
3
Looking for East Africa datasets
5
LiDAR dataset which is benchmarking for testing classification algorithms?
0
Seeking data for São Tomé and Príncipe?