Different representations of decimal coordinates out there - how to unify?

I have discovered that there seem to be two different versions of decimal coordinate representations in use out there.

This is seriously an issue, because some applications (e. g. Leaflet) will only accept the decimal numbering of the second variant (OpenStreetMap/Google Maps).

How can I get QGIS to show the coordinates in this more "common" numbering scheme?

Or is this just an issue about wrong georeference or coordinate system preferences?

I have checked the CRS of all maps as well as the project CRS: 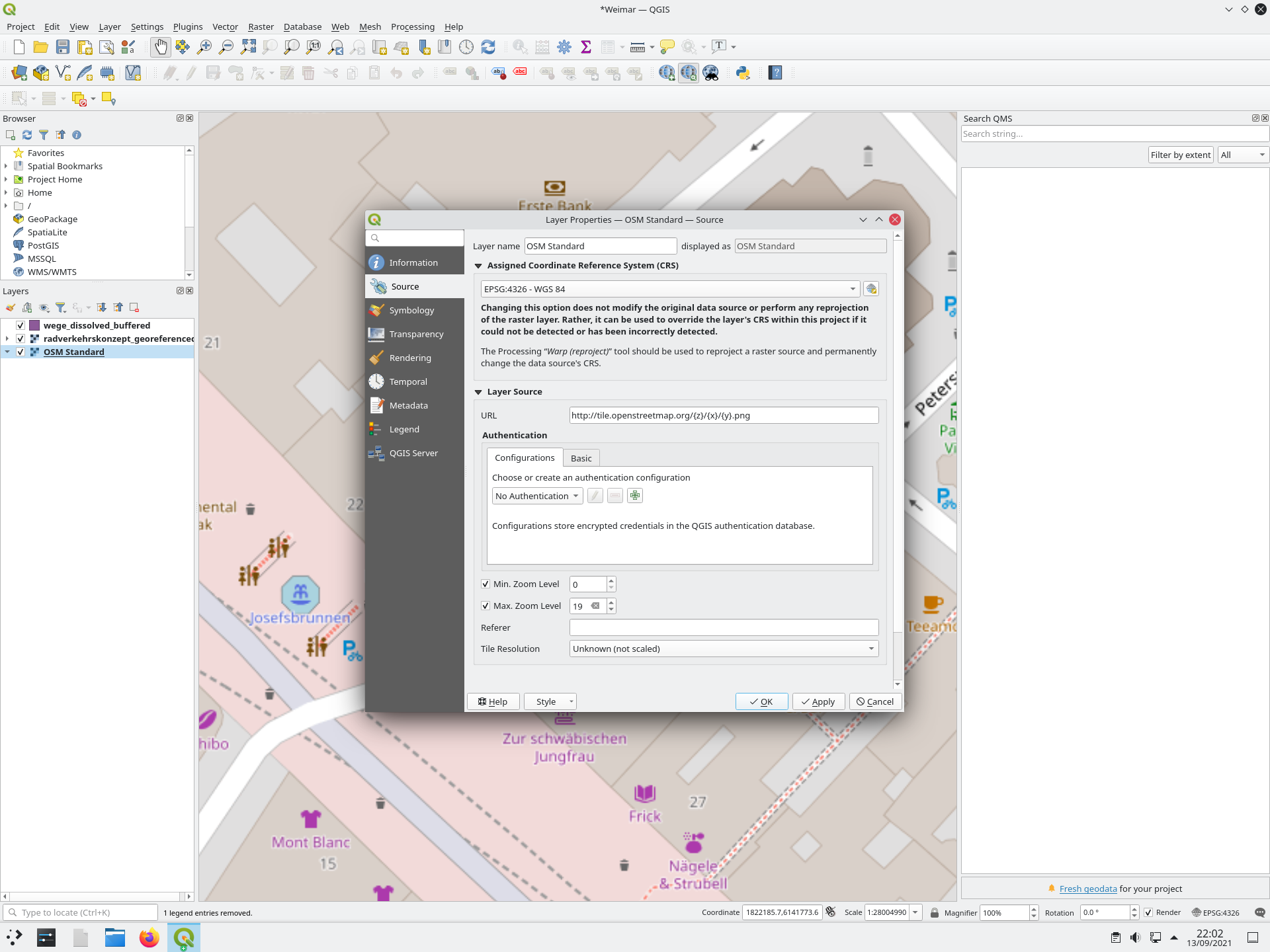 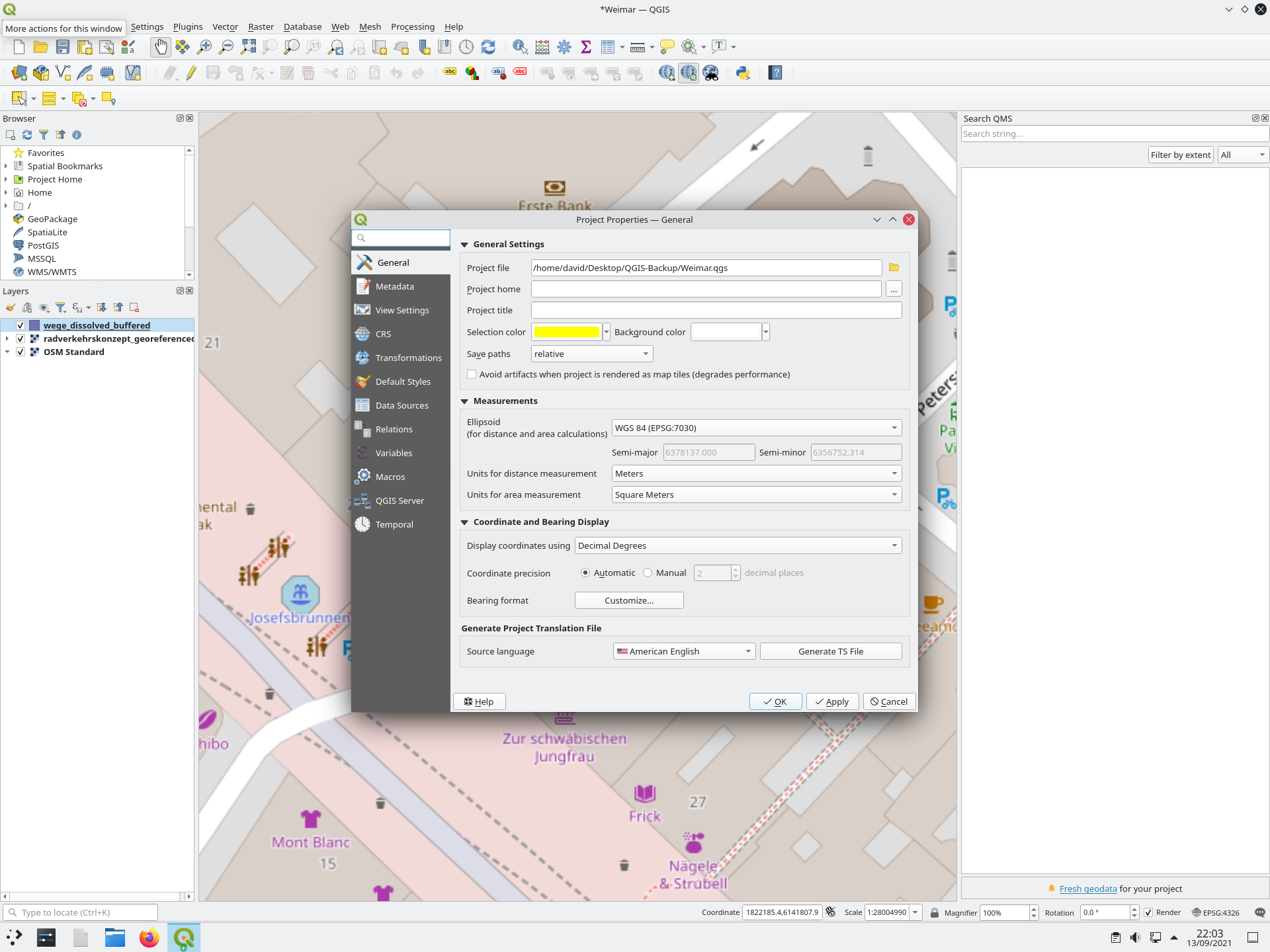 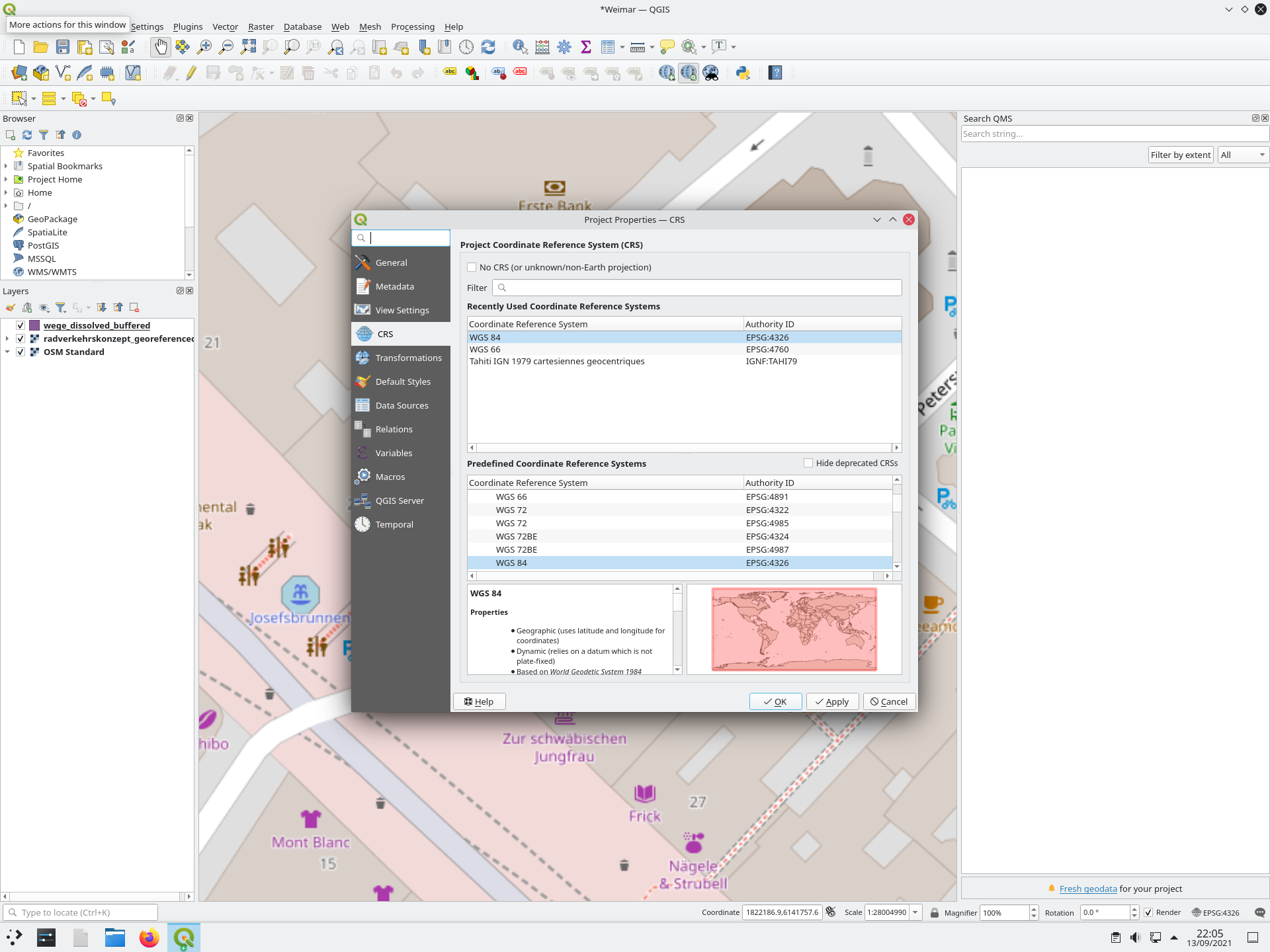 It seems to be correct, no? However, I still do not see the coordinates of OpenStreetMaps or Google Maps.

You can also get lat/lon (EPSG:4326) coordinates even if you have another project CRS (e.g. EPSG:3857 to show an undistorted OSM basemap) by right-clicking on the map canvas and selecting WGS84: see second screenshot below.

The coordinates that you get are in EPSG:3857 (WebMercator - used for the OpenStreetMap basemap). To get lat/lon coordinates (the one you want), project CRS should be in WGS84 (EPSG:4326).

That is the case in your screenshot. However, with EPSG:4326, the OSM map should look heavily distorted - as on my first screenshot below, but with the correct lat/lon values for coordinates.

Your basemap seems to be undistorted, what is not possible if it is "warped" from it's initial EPSG:3857 (WebMercator, used for most online maps) to the project's EPSG:4326. You (unintentionally) "un-distorted" the basemap by assigning layer CRS EPSG:4326 - it looks undistorted, but like this, places on the OSM basemap are misplaced. You "streched" the OSM map to a very huge extent that goes much beyond the min/max extent for EPSG:4326, so you get wrong coordinate values. See the link above for details.

By the way, be aware: most online maps (like Google, Bing, OSM etc.) use EPSG:3857 for map display, but coordinates are shown in EPSG:4326 to comply with common practice of using lat/lon values (e.g. GPS). This can be quite confusing.

Screenshot 1: with project CRS EPSG:4326, the OSM basemap looks like this - warped (cf next image), but the coordinates show the correct lat/lon values: 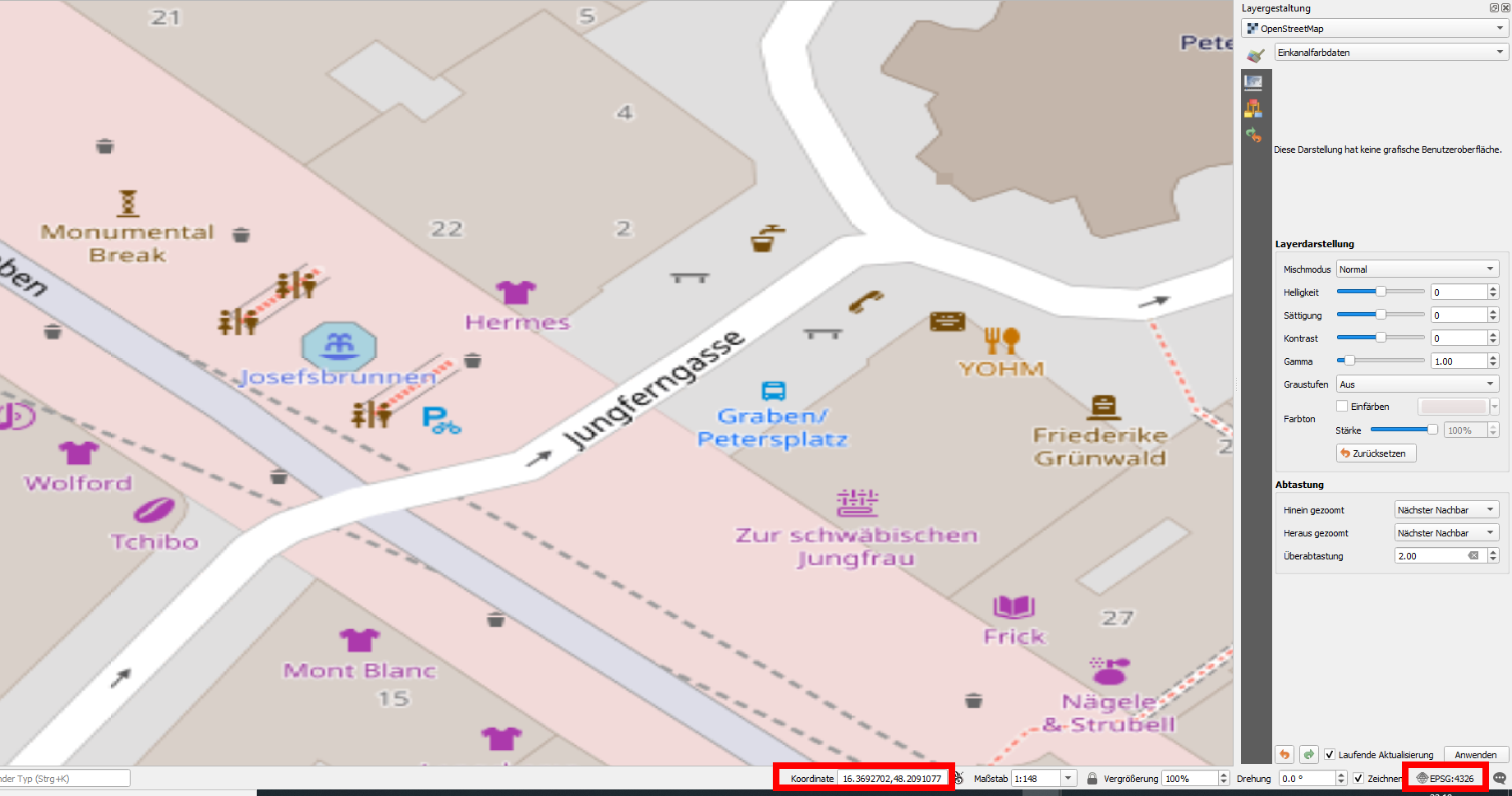 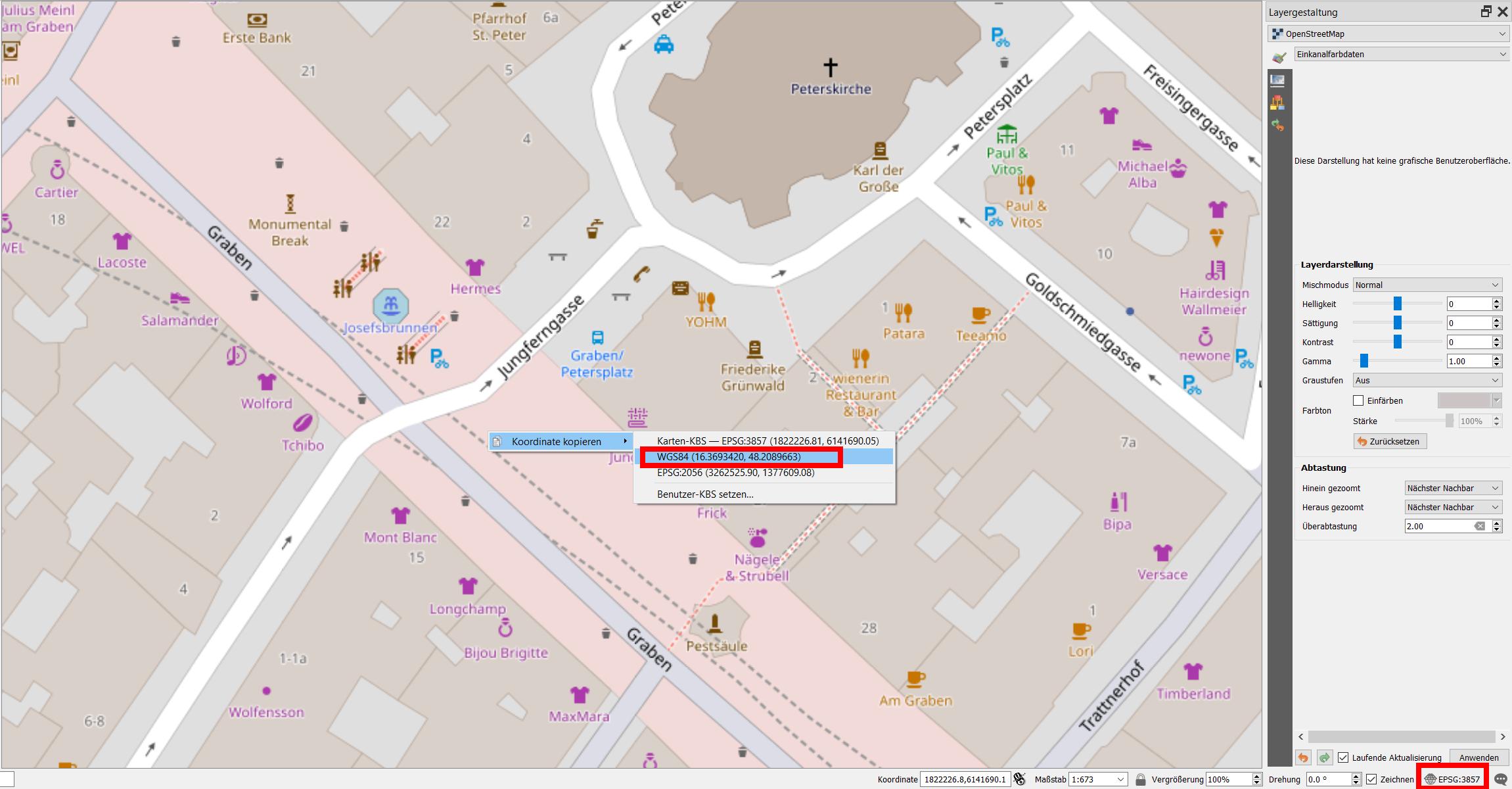 Google map APIs use format for a point as (Latitude,Longitude) which is also exquallent to (Y,X)

Openlayers APIs use the other way around like (Longitude, Latitude) or(X,Y) format.

QGIS uses coordinates depending on your settings configured.

Not the answer you're looking for? Browse other questions tagged qgis coordinate-system openstreetmap coordinates google-maps or ask your own question.

4
How to adjust the difference between the coordinate from OpenStreetMap and Google Maps
8
Understanding the difference between coordinates projection in OSM and Google Maps in China
4
How to embed a coordinate pair within URL to search OpenStreetMap, Google, Yahoo or Bing Maps
9
How to convert 6 & 7 digit coordinates to degrees latitude & longitude
4
correct projection of GADM data
1
CRS confusion or georeferenced
2
QGIS not saving CRS changes
1
Decimal degree coordinates plotting incorrectly on basemap in ArcMap