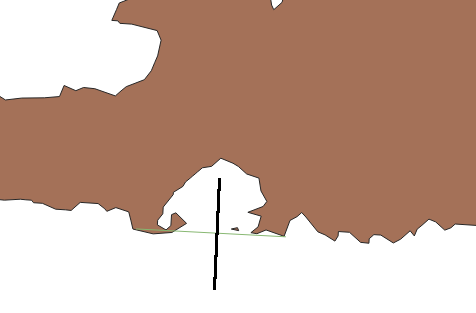 I'm thinking there must be a simple way to do this, but I'm not able to figure it out. I've used the "New Shape File" and "Add line Feature" (to make the green line), but I don't know how to make a line perpendicular to it, or how to read the orientation (I drew the black line in GIMP). I'm a total beginner in QGIS.

The angle of a simple two-point line segment in QGIS can be obtained with the main_angle() function. Open the attribute table and use the expression box at the top to set an attribute column (which you may need to create) to main_angle($geometry):

The angle at right angles is then that plus 90° degrees, so you can get that with 90 + main_angle($geometry) which I've stored in another column here.

Note that this direction could be into the bay or out of the bay, since there's no sense in the line segment of which side the bay is, unless you've consistently created your lines so that for example the bay is on the left of the line segment as seen from start to finish.

Also adding 90 can result in values outside (0,360), so you may need to reduce the result to that range using %, giving a final expression:

There's an azimuth() function that takes two points, so equivalently to main_angle($geometry) you can use azimuth(point_n($geometry, 1), point_n($geometry, 2)) for a simple two-vertex line segment. But that might break if you've accidentally digitised two coincident points at the start of your line. main_angle will cope with that and return the obvious angle of the line.

Not the answer you're looking for? Browse other questions tagged qgis line angles or ask your own question.

10
Comparing areas in scanned historical land use maps using QGIS?
1
How to compare polylines attribute from the same GRID cell in ArcGIS 10?
1
How to calculate distance to polygon edge to compute building setbacks?
1
How to combine two polyline shapefile together
0
Determining orientation angle of each street on dataset in ArcGIS Desktop?
2
Angle from x axis with QGIS
2
Project Point to Line on grid
2
Vector Difference Multistring lines doesn't work 100% (QGIS)
0
Create reference number based on direction of line