I have a massive MultiPolygon (~90'000 vertices, super complex, spreading over 60km², with lots of holes and parts) resulting of some Python computation. This MultiPolygon is coming as a WKT string. When I copy paste the query with that MultiPolygon into pgAdmin4, it makes the browser freeze for ~1minute. And if I dump that query into a file, it takes some time, and the file is ~20MB.

On the other hand, I have some other polygons (~86'000 features). They are already stored in a PostGIS database. They correspond to some specific regions of interest over a country. They are randomly spread out all over the country. They do not form a continuous surface. And they are quite small (to some square meters to max 1-2km²).

I need to get all features which intersect the large MultiPolygon. I am especially interested in the centroids of the polygons, after being clipped by the fat MultiPolygon (the ones outside being naturally no more needed).

Here's the query, it's embedded as a sub-sub SELECT statement (I found it was faster to "split" the code like this). I identified the part shown here as the bottleneck. It's taking ~1h on a mainstream 2016 laptop.

What I've tried so far

A first idea was to test for the ST_Intersects prior to the computation of ST_Intersection. This improved things consequently (between ~50 and 400% depending on the input MultiPolygon).

In addition, as the following part repeats two times...:

...I would wrote this as follow using a WITH statement if that query wasn't enclosed in two other SELECT statements:

But it's not at all improving the computation time. It's even the opposite and made it rise between +50% and +100%! Surprisingly. Or not.... Maybe because there are features all over the massive MultiPolygon, so I would intuitively say that the index is of absolutely no help here (which seems confirmed here: https://stackoverflow.com/a/5203827/6630397).

How could I lower the computation time of ST_Intersect() which seems to be the most time consuming operation here (see edits below)?

In addition, the problem with ST_SubDivide() is that if a landcover feature is covered by X parts of the subdivided MultiPolygon, it will results in X different records for that exact same landcover feature, but I naturally only need a single one (Fig.1).

Fig.1 As a result, a single landcover features is splitted by the st_subdivded MultiPolygon.

From these observations, I think I can pretty much say that it's the ST_Intersections() itself which costs the most time.

EDIT 2021-09-26: I also discovered the 'EXPLAIN ANALYZE' button on pgAdmin4 (but I don't understand well how to interpret the results, this is quite obscure to me).

I think this, from the 'Analysis' tab in the bottom pane showing the results may be relevant (this is another feature I'm actually working on, which only takes some minutes instead of a full hour):

Fig.2. Analysis tab in the results pane of pgAdmin4 after EXPLAIN ANALYZE was run with all options checked.

along with this table, from the 'Statistics' pane: 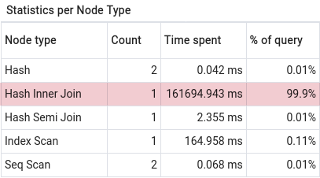 Fig.3 "Statistics per Node Type" from the 'Statistics tab in the pgAdmin4 results pane.

But this surprises me as the shown condition is not mentioning the intersection. And I have no idea what is this _1 suffix doing (second row of Fig.2).

okay a few things as I mentioned in the comments

Point set intersections are very costly, and you want to absolutely make sure you limit your queries

For this you want to

Always post the full EXPLAIN ANALYZE output here - some of us know how to make sense of it and may be able to help you even more!

Previous answers are of course precious, but what I discovered by testing a PG14 based image is... amazing! I cannot believe my eyes after some early testing (maybe this is simply related to a better default configuration, bfut if not, improvements are really outstanding)!

I took the exact same query that was problematic to me on PG13+PostGIS3.1:

Same query copied/pasted it into PG14+PostGIS3.1:

I'll let you judge for yourself.

Not the answer you're looking for? Browse other questions tagged postgis postgresql intersection spatial-index optimization or ask your own question.