How do I make a heat or Choropleth map that uses polygons in QGis?

I've been playing around with the heatmap plugin for QGIS and I am wondering if it is possible to make heatmap with using a similar plugin/tool that uses polygons as well as points?

I would like to get a representation of the density of the data in much the same way that the heatmap plugin does with points.

The following image is a rough sketch of my desired result: 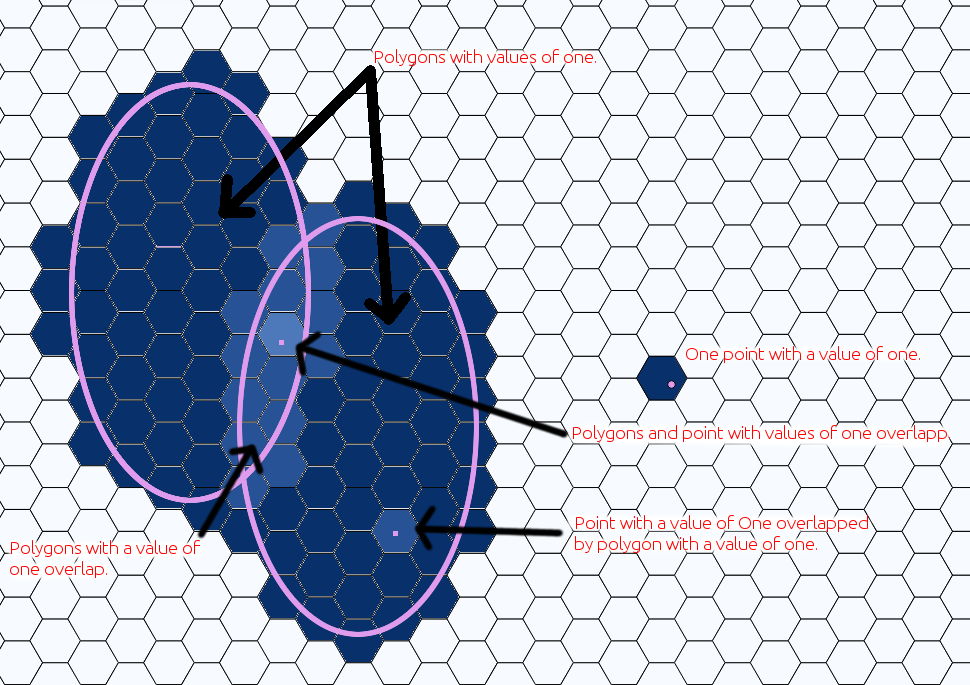 Maybe you can generate a set of random points into your polygons, there is a QGIS tool for that ? If you have overlapping polygons, then you have higher density of them in this area. Then use heatmap for the points. You would need to run several rounds to find optimal number of points, as result depends on that.

If your data shows distribution of some habitats, which is fuzzy anyway, then this could be closest to the real world situation where one point reflects approximately one specimen.

If I understand your question correctly I have done something similar before; just had to remember what I did.

This will work if your polys are overlapping AND not the same layer. If they are on the same layer and it it is possible, move them to seperate layers, if you don't the target layer will just inherit one of the values.

The key process to use is the Join attributes by location under the Vector > Data Mangement menu. Here specify your hexagonal field as the target layer and the join layer as one of your polygons. Name your resulting layer and tick the radio button for Keep All Records.

Your final layer should have inherited all the attribute fields of the previous layers and much of it may say NULL.

This is where we have to play in some of the guts of a shapefile, so if you havn't saved the layer as a shapefile do so now. And remove the layer from your workspace in QGIS.

Open the shapefile's *.dbf files in OpenOffice Calc, DO NOT use Excel. It will mangle the file and it useless, learned that the hard way. And do not reorder the data, it is very specific on the order of rows in the file as well. Check to make sure the NULLs now are Zeros if they are not, replace them carefully.

Now insert the shapefile into QGIS and open the Attribute Table. It should now show zeros instead of NULL. Use the Field Calculator and sum the fields that are realted to your work in a new column.

Now you have a summed field that should show with a degree of accuracy the values of the all the feature collections overlaping the target field. You can use the Symbology function to color your polygons based upon the value of your summed field for a nice choropleth map.

If you want to rid of all the unused field in the file. Just open the dbf file again in Calc and delete the unwanted columns at will. Personally, I'd advise learning to get comfortable going into a shapefile this way as I do it often.

This is a general workflow using rasters. I don't know the specifics to accomplish it in QGIS.

Alpha/null values and/or layer transparency would allow you to overlay the raster on any basemap.

Try this instead, if it fits your requirements, it isn't a computational solution to the dataset but if you are looking for simply an infographic solution you could try this instead.

Join attributes by location, with your heaxgonal cells as as the target and your point data as the join. Choose to keep all features. Set the symbology to the cells with the inherited value to desired color and set transparency to the something like 50%.

Then on your layer with the circle polys set their symbology to the same color and transparency. Place the circle poly in front of the cell poly. This will give the illusion of increased saturation as the value increases.

If you wish you could also extract the lines of the all the polys and overlay on top so sublayer outlines don't appear to be coloured over by the other layers.

You will have to play with the colours and transparency to find the best solution. I find the same colours looks best but experiement.

I suggest you use the GRASS plugin -- QGIS has pretty limited functionality (and why reinvent the wheel in python when software like GRASS already exists?):

[next two lines might be necessary, depending on whether your polygons already have a value]

With plain QGIS it could be tricky, you may need custom scripting, or use spatial database like PostGIS or Spatialite. I would create regular grid of points with PostGIS or generate as CSV text file and import this. Then draw circle around each point with st_buffer, or rectangules with ST_MakeEnvelope, and count all overlapping areas of each buffer. Then you probably want to remove all 0 values, if it means "no data". Finally you can do heatmap for the grid, using counter as Weight field.

You need to experiment with different grid resolutions to find optimal one. In essence it is very similar to the raster approach suggested by Kevin, just staying in vector world.

Not the answer you're looking for? Browse other questions tagged qgis polygon density heat-map or ask your own question.

8
How to adjust the granularity of a heat map in QGIS?
5
Key for a Heat Map
3
Using polygons to create heatmaps in QGIS?
3
How do I read and modify heat map value classification on QGIS?
3
Styling a heat map based on point attribute, not density
15
Doing heatmap from line data in QGIS?
0
Point averaging alternative to GeoServer WPS heat map transformation
4
Make biodiversity heatmap in QGIS out of polygons and not points