How can I use the Python osgeo/ogr library to export a feature layer to CSV with geometries coded as WKT?

How can I read in a layer's data using the python osgeo/ogr library and then export the whole attribute table and an extra column with the geometries coded as WKT to a CSV format?

I know that this is possible using the ogr2ogr command-line function. The command to run from my terminal would be something like this:

The command above takes the "input_layer_name" layer from the input GDB and exports it to a CSV file containing all columns in the original attribute table and another column called WKT that contains geometries' WKTs.

But I'm not interested in using the ogr2ogr application. I'm trying to do this from within a Python script. Sadly, using python's subprocess library to run the command above from inside Python is not an option here.

I've cobbled up a script that almost does what I need, but it still has a few issues:

I currently see three problems with the method I display above:

I know this is a long post, but ultimately, my question is pretty simple. I just want to figure out how read in layers from osgeo/ogr and export them to CSV with a WKT column inside Python. 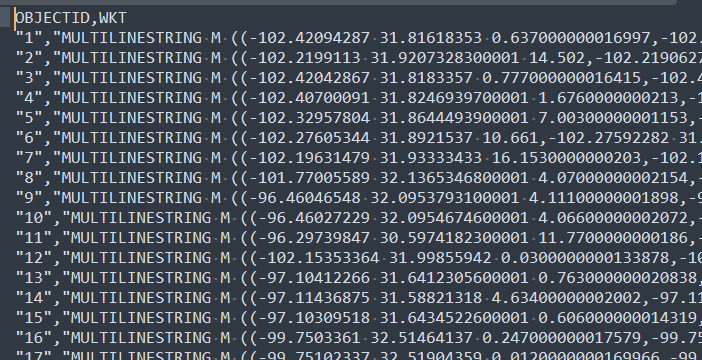 PS: I know that the specific input file doesn't matter much, but here's the input file I'm working with: ZipFile with GDB. The zipfile contains some other stuff too, but I'm focusing on the GDB - specifically, the layer called "TxDOT_Roadway_Linework".

Not the answer you're looking for? Browse other questions tagged python ogr well-known-text python-3 osgeo or ask your own question.