I have an iteration problem.

I would like to do this using ArcMap ModelBuilder using an iteration process. However, I have so far not been able to construct the model so that it automatically clips each buffer zone using the corresponding watershed area.

However, this only clips the 4014 buffer zone and the outputs for the other clips are empty.

Following the suggestion below by @Hornbydd, I have amended my model as follows:

However, it does not seem to run. In this case the %4014%.shp is the watershed that I would like to use to clip the corresponding buffer. For the calculate value expression I have added the following which may be an issue?

Also, not too sure about the Clipper and %Clipper% elements in @Hornbydd's examples below.

Following @Hornbydd's advice I have now go the following model:

The model now runs. However, it only outputs a clipped shapefile for the last of the buffer shapefile series.

This can be done easily in ModelBuilder, with a small bit of inline substitution to build the name of the watershed layer using the Calculate Value tool. The model is:

Data type is set to FeatureClass

The clip tool is set up as: 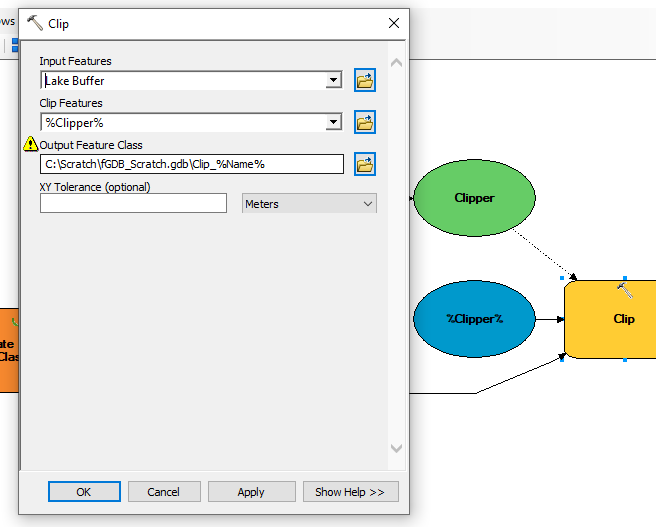 Not the answer you're looking for? Browse other questions tagged arcgis-desktop arcmap modelbuilder clip iterator or ask your own question.

12
Batch Clipping in ArcGIS Desktop using ArcPy?
1
How to clip by inidividual polygon shapes rather than by an aggregated shape consisting of all polygons in the shapefile.
4
How to prevent running part of a model when iterator is used?
3
Clipping multipart polygons iteratively
0
Cycle through / add name of clipping feature to output of clips in Model Builder?
1
Appending polygons to existing feature class in ModelBuilder?
2
Nested iterator in model not working?