I asked this question a while ago about a route in a multimodal network dataset not using all forms of transport available. While the answer worked at the time, I am now in a similar situation again.

My multimodal network dataset has three feature classes containing a single bus route, bus stops and streets. The bus route and streets have fields containing one way status and the amount of seconds it takes to traverse them. My data is basically the same as the tutorial data for ESRI's tutorial on multimodal datasets, except I have bus lines instead of metro lines.

I think my problem is with setting up the connectivity groups correctly. The bus route was created by tracing along the streets and splitting it at bus stops. The bus stops are snapped to the end points of each segment of the bus route, i.e. Stop 1 is snapped to the from_point of Segment 1 etc. The streets are not split at intersections.

In theory, a pedestrian should be able to walk from a side road into a main road to a bus stop, board a bus, travel along the route, exit the bus and continue walking around the streets. My connectivity settings are as follows:

I have been using ESRI's tutorial as the basis for my dataset, but according to this:

This seems to imply that I only need one connectivity group. I have tried solving for a route using both setups, but I have gotten an error each time. The analysis settings: 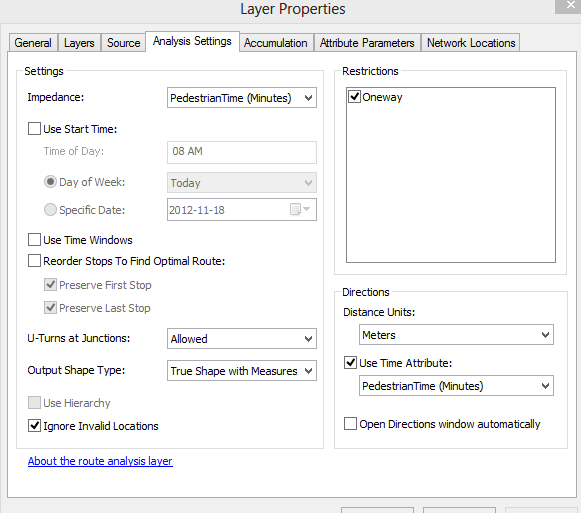 This could be part of the problem

The streets are not split at intersections.

If they aren't split at intersections then

If they do not share any coincident endpoints or vertices, no connectivity policy will create a junction at the point of intersection. Street data for network datasets must be cleaned first so that either vertices or endpoints are present at all intended junctions.

Why do your ftr_roads have Any vertex connectivity by the way?

You might also want to read up about connectivity and designing the network datasets, too.

Not the answer you're looking for? Browse other questions tagged arcgis-10.1 routing network-analyst multimodal-network or ask your own question.

3
How to map our data with Google Map data
5
Solving route in multimodal network dataset does not use all forms of transport available?
3
Creating transfer edges in a multimodal network dataset
5
Adding transportation schedules to a network dataset
6
How to store route names of a stop belonging to multiple routes
3
Snapping points to lines using ArcPy?
2
how to find optimum number of college bus routes for connecting 120 bus stops, distributed over large road network
2
Finding distance between multiple points along a line