How to extract slope from topographic raster map? [duplicate]

I am working on a project for a machine learning class wherein I extract features from a topographic raster map and then classify the traversability of the terrain. One of the features I need to extract is slope. My initial thought was that an approximation of slope at any given point could be extracted from a map by calculating the distance between contour lines. However it seems I took for granted the complexity of extracting the contour lines.

In attempting to solve this problem I found myself trying to learn a number of GIS tools. However I still have not been successful which is why I am here. I have installed gdal and used gdal_contour to generate what I believe to be a DEM. From there I loaded it into qgis along with the original raster map. From this I see that when gdal created the DEM it used only one of the two colors that designate contour lines. Worse yet it used the less frequent color so the resulting contour lines are highly segmented.

This leaves me with a couple of questions. The first is whether it is possible to designate the colors gdal uses to extract contour lines and generate the DEM. The second is whether there is a simpler method for extracting the desired data.

You can use the GRASS GIS backend's r.surf.contour to generate a DEM from rasterized contours. Use it through the GRASS toolbox or the Sextante plugin (or directly of course). Subsequently r.slope.aspect will calculate the slope from this generated DEM.

Look at part 2 of this tutorial:

for how to create a GRASS region. The file hierarchy is very fussy - this is the tutorial that helped me to get it right after many frustrating hours of trying!

If you manage to download a DEM for your area of interest from the Utah site, as a first step I think it would make sense to use this to create a shaded relief image, so that you can make a quick visual assessment of the terrain that you're dealing with.

For example, as an exercise I downloaded a 2-metre DEM (Heber 2m DEM from LiDAR - North) as a zip file that extracted to a number of *.asc files. I made a virtual raster of these (Raster -> Miscellaneous -> Build Virtual Raster) and then loaded the resulting VRT file.

The image below shows a tiny part of the hillshade image. The rectangular features are about 3 km west of Huber and are, I guess, reservoirs or someting similar. Using the raster value tool on the DEM indicates that the outer bund walls are about six metres in height.

After you've had a look at the terrain, you could for example then move on to creating a slope raster from the VRT DEM and rendering this in colours to indicate slope, or ruggedness or what ever you wish.

I'm not quite sure about what your object is. Are you trying to calculate the optimum path from Point A to Point B for an ATV, for example? 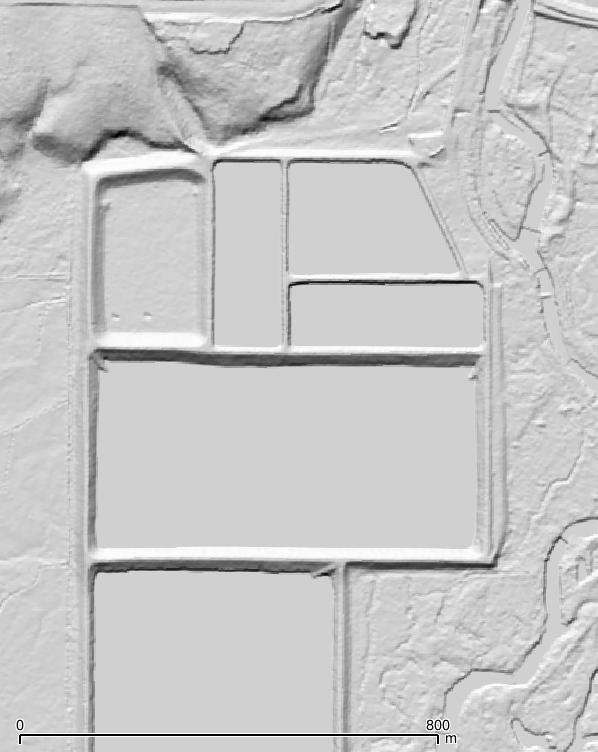 Not the answer you're looking for? Browse other questions tagged qgis gdal qgis-plugins contour or ask your own question.

1
Most optimal algorithm for contour correctness?
4
Suggestions for vector format for contour map
1
Creating slope map with different colors according to slope percentage or degrees
1
How to remove thin lines and small points from qgis raster
3
Recommendations for creating contour map from depth points
5
Problem of irregular contour from a DEM
3
Finding “negative contours” when making contour lines from DEM
2
Mirrored Contours from DEM in QGIS
1
Incorrect tiles from a shapefile are generated by mapnik