What is a delta in lat/lon called?

What is the delta between two lat/lon pairs called? Delta degrees? Arcs?

Is it some quantity of distance but what is its unit of measurement?

And related: Can we use pythagoras to calculate this distance?

You can't use the simple Pythagorean theorem as that one's for planes whereas the distances you are talking about now are on a curve. For that, you'll have to use spherical trigonometry. From Wikipedia:

be the geographical latitude and longitude of two points (a base "standpoint" and the destination "forepoint"), respectively, and

their absolute differences; then

, the central angle between them, is given by the spherical law of cosines:

The distance d, i.e. the arc length, for a sphere of radius r and

given in radians, is then

Note that using r = 6,371.009 metres is appropriate for calculating great-circle distances between points on the Earth's surface, in which case the result d will also be in metres.

I've seen a Euler Pole plus an angular displacement used to describe "delta". This is used a lot in plate reconstruction, where these deltas are often referred to as "rotations", but I'm not sure if that is a formal definition. 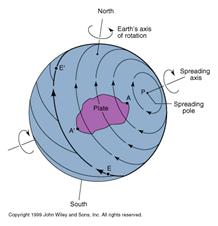